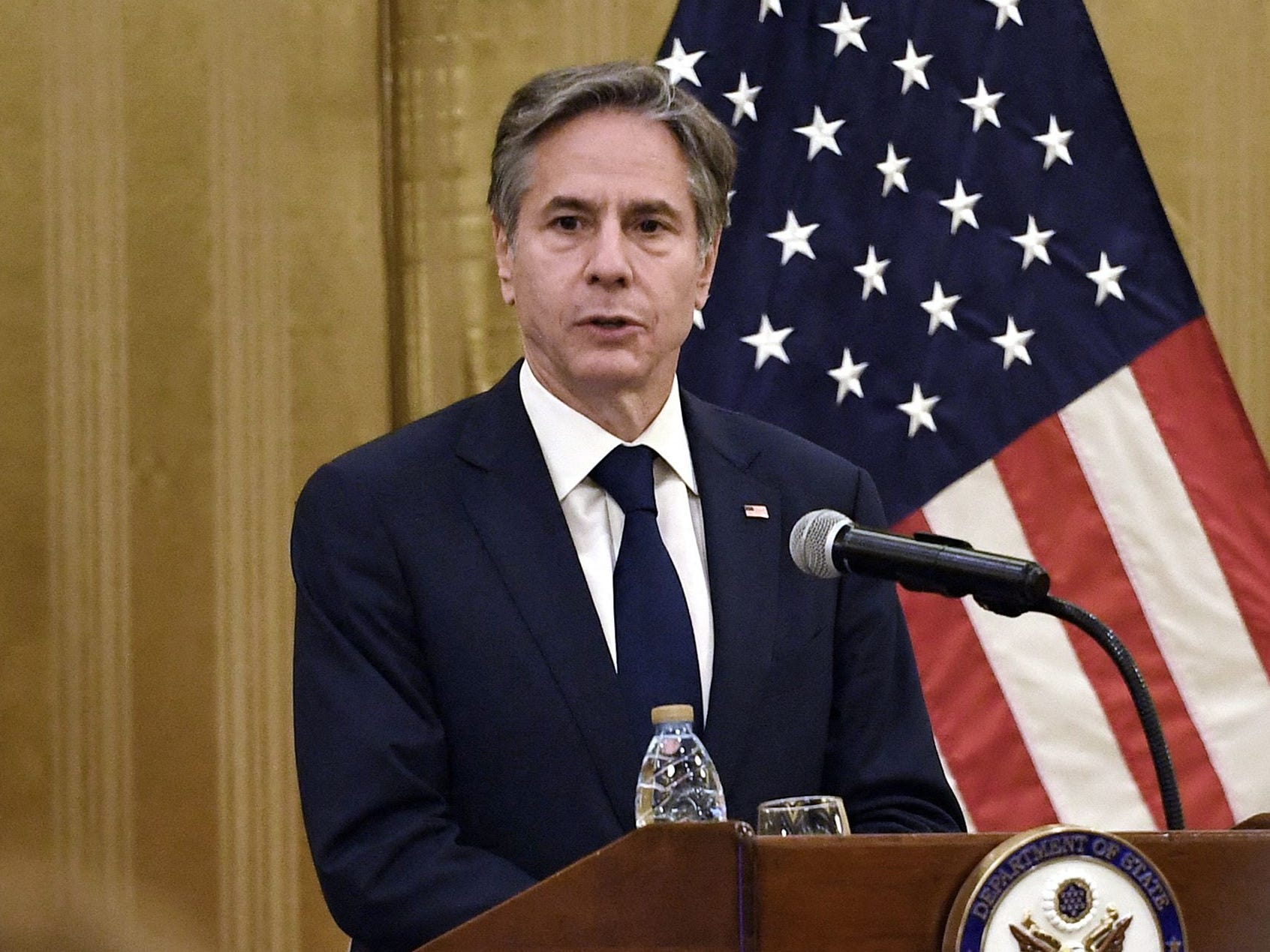 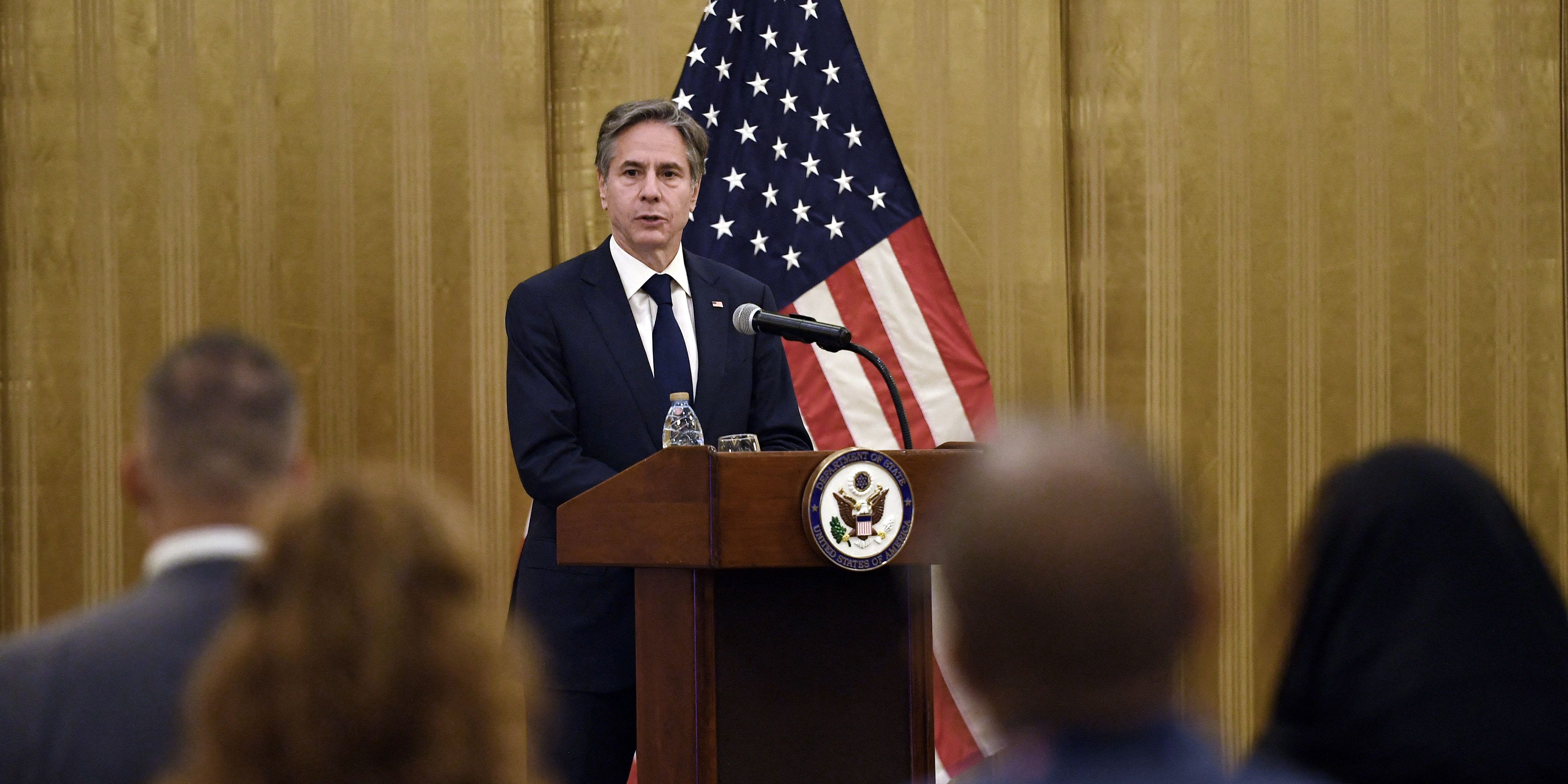 US Secretary of State Antony Blinken speaks to members of the US embassy and Mission Afghanistan in the Qatari capital Doha, on September 7, 2021.

US Secretary of State Anthony Blinken said Tuesday the US was “not aware” of a hostage situation at an airport in northern Afghanistan.
GOP Rep. Michael McCaul on Sunday claimed six planes with Americans on board were being held “hostage” by the Taliban.
“It's my understanding that the Taliban has not denied exit to anyone holding a valid document,” Blinken said.
See more stories on Insider's business page.

US Secretary of State Anthony Blinken said Tuesday he was unaware of any hostage situation between the Taliban and Americans at an Afghanistan airport after a GOP lawmaker claimed the Taliban were holding six planes at an airport in the northern part of the country.

Blinken on Tuesday acknowledged that some flights had been held at the Mazar-i-Sharif International Airport but said the planes were not allowed to depart because some of the passengers did not have the valid documents required to leave the country.

He said there were “a relatively small number of Americans who we believe are seeking to depart from Mazar-i-Sharif with their families.” Reuters reported Monday that around 1,000 people, including some Americans, are stranded at the Mazar-i-Sharif airport.

“There are groups of people who are grouped together, some of whom have the appropriate travel documents – an American passport, a green card, a visa – and others do not,” Blinken said at a news conference in Qatar, according to Politico.

“It's my understanding that the Taliban has not denied exit to anyone holding a valid document, but they have said that those without valid documents at this point can't leave,” he added. “But because all of these people are grouped together, that's meant that flights have not been allowed to go.”

Blinken's comments Tuesday follow remarks from GOP Rep. Michael McCaul on Sunday. During an appearance on Fox News' “Fox News Sunday,” McCaul claimed that six planes with Americans on board at northern Afghanistan airport were not allowed to depart the airport.

“In fact, we have six airplanes at Mazar-i-Sharif airport, six airplanes, with American citizens on them as I speak, also with these interpreters, and the Taliban is holding them hostage for demands right now,” McCaul, the top Republican on the House Foreign Affairs Committee, told Fox News' Chris Wallace.

McCaul said the Taliban was holding the planes at the airport in a “hostage situation” until the US government acknowledged the Taliban as the legitimate Afghanistan government.

“We are not aware of anyone being held on an aircraft or any hostage-like situation in Mazar-i-Sharif,” Blinken said Tuesday. “So we have to work through the different requirements, and that's exactly what we're doing.”

A State Department spokesperson told Insider on Sunday that they planned to “hold the Taliban to its pledge to let people freely depart Afghanistan.”

“As with all Taliban commitments, we are focused on deeds not words, but we remind the Taliban that the entire international community is focused on whether they live up to their commitments,” the spokesperson said.

President Joe Biden on Monday said the US was a “long way off” on recognizing the Taliban as the legitimate government in the country.

Source: Blinken says the US is ’not aware’ of hostage situation at Afghanistan airport after GOP rep claimed 6 planes were stuck there