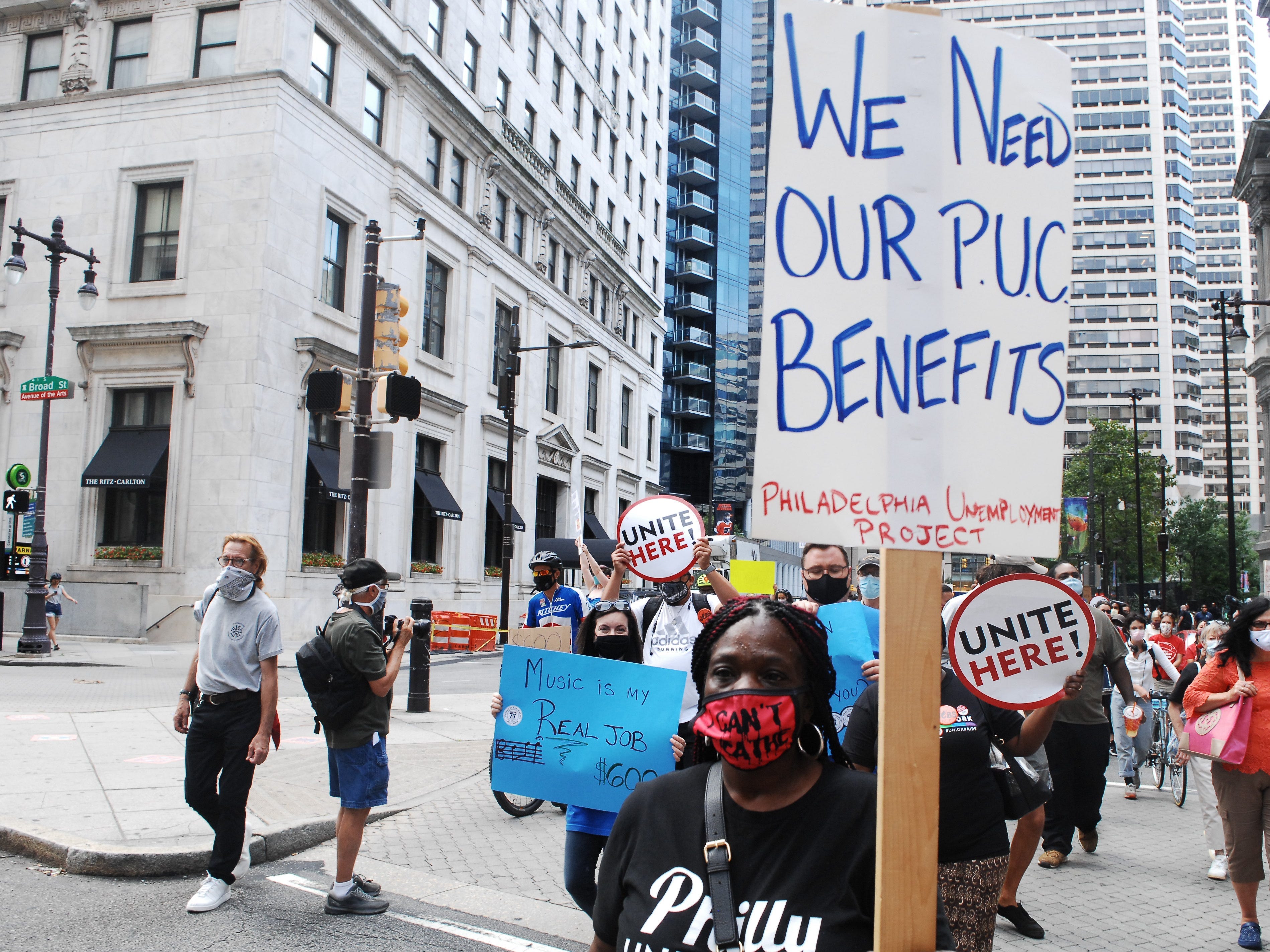 Unemployed people at a rally last year in Philadelphia, Pennsylvania.

Come September, 7.5 million Americans are projected to lose all of their unemployment benefits – not just the $300 a week boost from federal pandemic relief.

That number comes from a new report by Andrew Stettner from the left-leaning Century Foundation, which looks at the looming fiscal cliff that jobless workers are facing. With the rise of the Delta variant, and the current pace of recovery, the report argues that benefits are getting cut off too early.

“We've been trying to undo the mistakes of the past by having a more aggressive program of assistance, but we're still making that mistake of pulling back too soon from assistance and economic stimulus,” Stettner told Insider.

That won't just yank benefits away from jobless workers, Stettner said. “It's going to take consumer spending out of the economy, it's going to slow the rate of GDP growth.”

But the White House hasn't done anything about it yet, even as the Delta variant unmoors economic policies designed to end as the pandemic winds down. The White House did not respond to a request for comment.

Those millions of jobless workers have been collecting benefits through two pandemic-era federal programs: Pandemic Unemployment Assistance (PUA), which expanded eligibility for benefits to gig workers and self-employed workers, among others; and Pandemic Extended Unemployment Compensation (PEUC), which extended how long recipients could collect benefits for.

Then there's more than 3 million workers who are still receiving $300 weekly supplements to state unemployment insurance. When that's cut off, $3.5 billion less will be flowing through the economy.

Stettner said it would make more sense to maintain benefits until we reach closer to pre-pandemic levels of unemployment – not when millions are still filing unemployment claims.

Senate Democrats are in the early stages of assembling a $3.5 trillion party-line package that isn't likely to attract any GOP votes. That means all 50 Senate Democrats must stick together for the package to pass over unified GOP opposition in the Senate.

So far, an extension of federal unemployment benefits seems unlikely. But in the weeks ahead, Democrats may recognize the dire situation facing many jobless Americans.

“I'm sure that many have thought about that – I have – as to what the next stage is as the economy gets stronger and jobs are available, what we should do with unemployment,” Sen. Dick Durbin, the second-ranked Democrat, told Insider. “It's a tricky question because it's different – by worker by state, by region. But you know there's still need for a helping hand.”

And that extension, if it comes to fruition, would likely come in the reconciliation bill. Stettner said it would be better late than never.

There could be logistical issues to reinstating unemployment, of course. State unemployment systems have struggled to disburse benefits on time, and an extension would keep those claims high. A more notable challenge is that 26 states – 25 of them governed by Republicans – have opted out of federal benefits early. That means workers in many of those states were already cut off from PUA, PEUC, and $300 extra per week – adding another layer of complexity to getting those benefits up and running again.

Even so, millions of workers could get relief for a little bit longer. As Stettner said: “If we can't do it now, when congressional offices have been bombarded for a year-and-a-half with constituent complaints, when are we going to be able to do it?”

Source: Unemployment aid will vanish for 7.5 million workers in September. There’s no plan to extend.

Who you found a business with is more important than having a good idea, says Airbnb CEO Brian Chesky