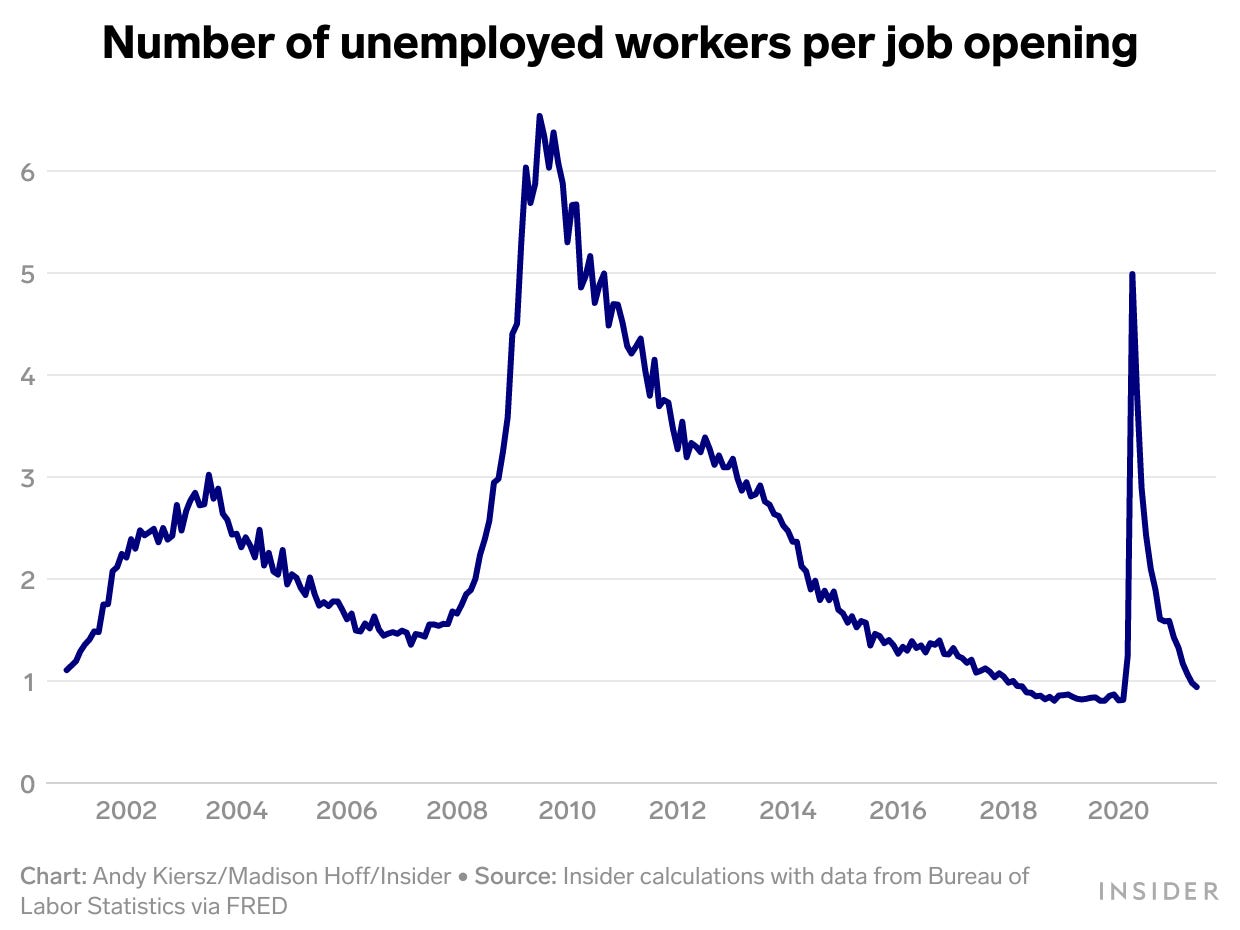 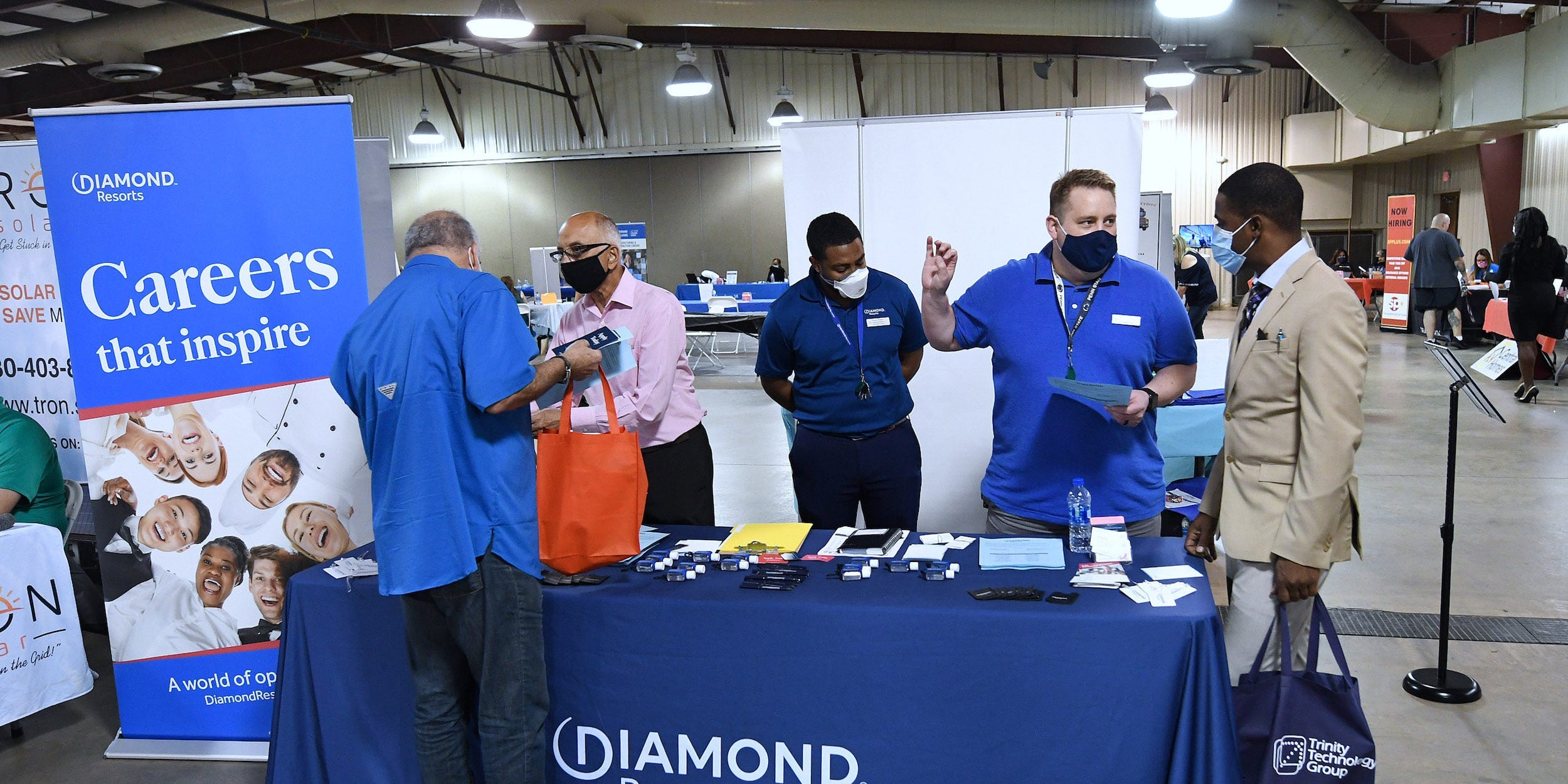 Job openings exceeded available workers in June for the first time since the pandemic recession began.
It's unusual for such labor-market tightness to emerge so early in an economic recovery.
Businesses have raised wages at the fastest pace in decades to attract workers amid the shortage.
See more stories on Insider's business page.

Economic data now puts it plainly. For the first time since February 2020, the US has more job openings than available workers to take them.

US job openings soared to a record 10.1 million in June, according to Job Openings and Labor Turnover Survey, or JOLTS, data published Monday. And while the economy added nearly 1 million payrolls through the month, the increase in openings helped job listings outpace available workers. The ratio of workers to openings fell to 0.9 from 1, marking a new pandemic low and underscoring the stark imbalance between worker supply and employer demand.

Such a reading isn't totally unusual. The ratio sat as low as 0.8 before the pandemic, when the US was enjoying its longest economic expansion in history. Readings below 1 indicate tightness in the labor market, or that businesses are struggling to find workers, but what's unusual here is the record number of openings. That implies the US jobs market is acting like it's near the end-stage of a long economic expansion, but it's only a year removed from one of the worst recessions in history.

Anecdotes of new incentives such as signing bonuses and higher wages first hinted at a nationwide worker shortage, but this latest JOLTS data confirms that American workers are reluctant to take most of the jobs on offer. Whether that's related to low wages, COVID concerns, or something else is unclear.

It's possible the ratio reverses some of its decline, but massive demand for workers suggests it'll stay put for some time, Nick Bunker, director of research at the Indeed Hiring Lab, said.

“Employers' demand for workers is incredibly strong. But at the same time, labor supply is, at least for now, not that abundant,” he said. “Whether this level of tightness will continue depends on whether demand can stay this high and how quickly workers will return to the labor force.”

A handful of sectors were even tighter than the broad ratio implied. The wholesale trade sector – businesses that sell goods and merchandise to retailers – had a three-month average ratio of just 0.4 workers-per-opening, according to the Economic Policy Institute. That made it the tightest industry in the US.

The finance, insurance, and government sectors boasted ratios of 0.6, and restaurants and accommodation businesses had ratios of 0.8.

Some industries still had a surplus of available workers throughout June. The mining and construction sectors had three and two unemployed workers per opening in June, respectively. Available workers also exceeded openings in the retail, education, information, and real estate sectors.

The labor market, while recovering unevenly, is overall rebounding at extraordinary speed. It took 106 months for the worker-to-openings ratio to fall from its July 2009 peak to 0.9 in April 2018.

That same decline took just 14 months during the COVID downturn, highlighting just how quickly the labor market tightened. Whether these strains linger will be crucial to shaping the post-pandemic economy.

“The reopening of the broader economy has resulted in unprecedented levels of demand for workers,” Bunker said. “The question now is by how much and how quickly will this situation fade.”

Source: The US economy has more open jobs than people looking for work