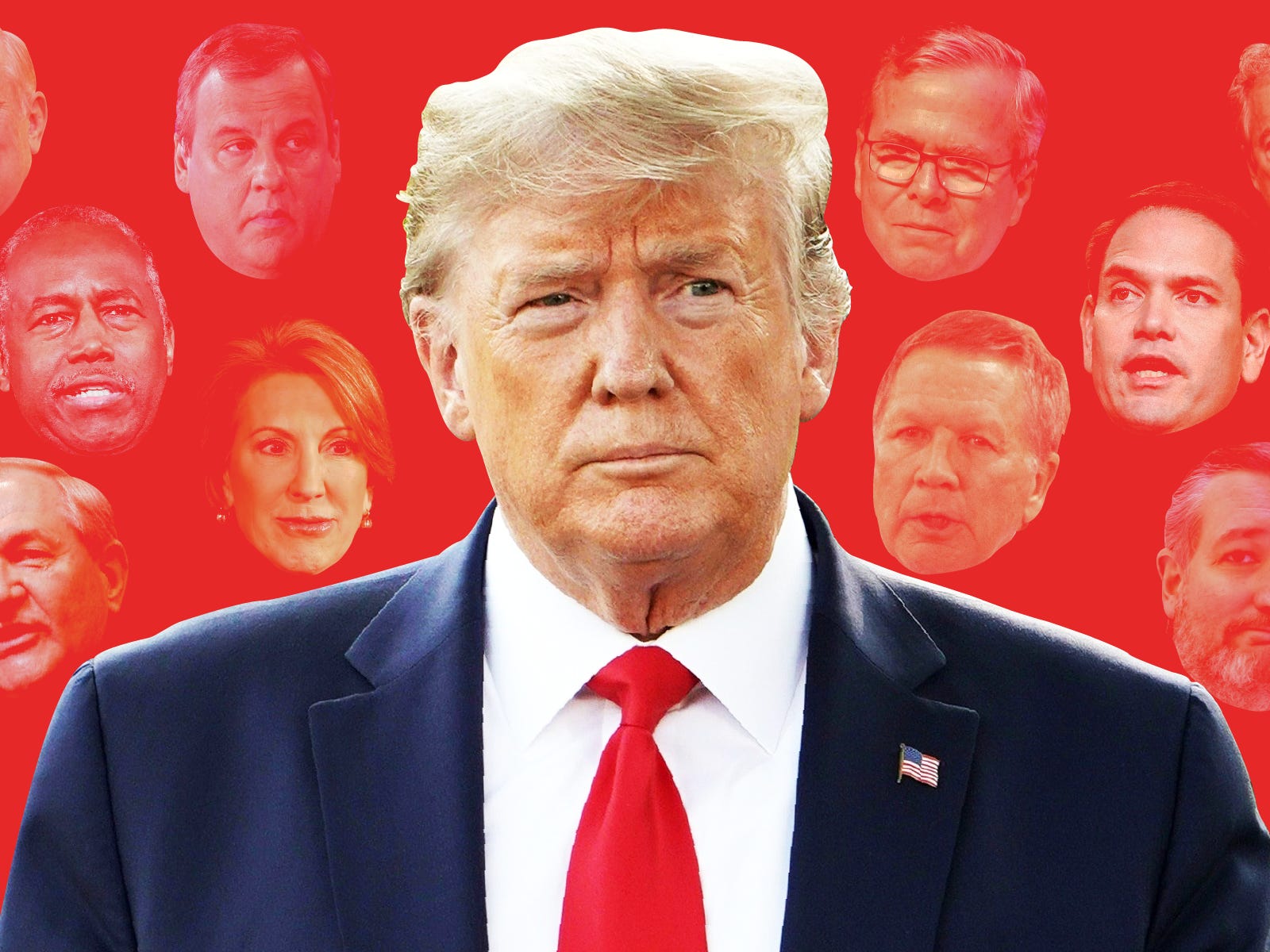 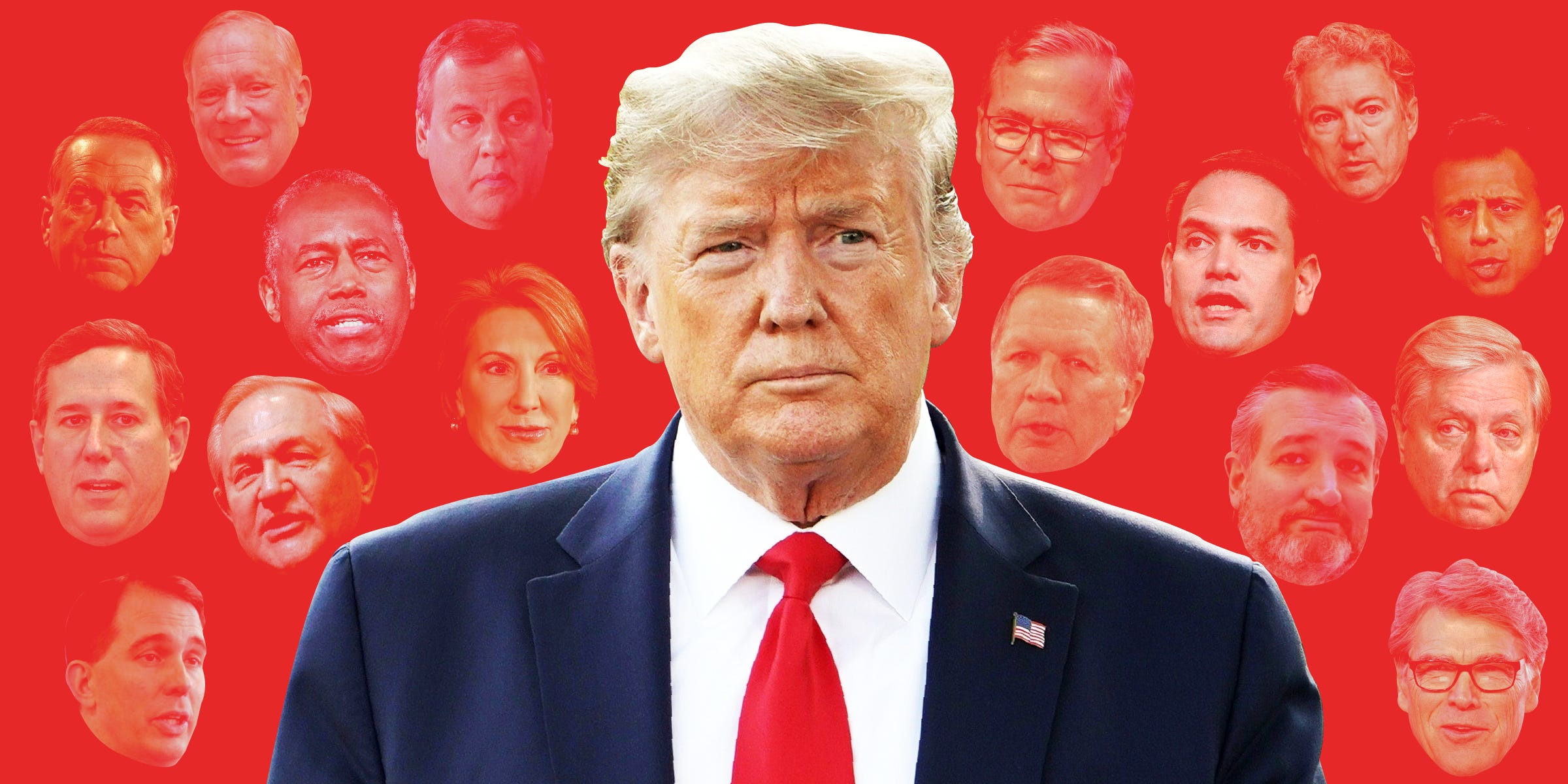 Insider interviewed 22 people with front-row seats to the 2016 GOP presidential primaries.
We collected colorful anecdotes and never-before-reported details about the historic campaign.
Combined, they tell the story of how Trump became the king of the GOP – a crown he still wears to this day.

Five years after the 2016 Republican presidential primary and national convention, the candidates and staffers are still coming to terms with how much has changed – and how much hasn't – about Trump's GOP.

That's why Insider embarked over the past several months on an oral history project to document a truly bizarre time in American history, when the seam between politics and entertainment faded.

To jog our memories, we talked to 22 key insiders who were central to the 2016 presidential race about the unprecedented Trump primary campaign and how he was able to mount a successful hostile takeover over the GOP that still endures today.

Read more: The definitive oral history of how Trump took over the GOP, as told to us by Cruz, Rubio, and 20 more insiders

Our oral history traces Trump's victory over 16 other brand-name Republicans from 2015 to 2016, including Jeb Bush and his monster $100 million war chest, rising-star senators like Ted Cruz and Marco Rubio, and the pugnacious New Jersey Gov. Chris Christie.

Some of the highlights you'll remember, like Trump's infamous escalator ride. Others you might not have never known: he almost took the elevator!- and after the Iowa Caucuses, aides had a come-to-Jesus meeting with him to convince him the election results should be accepted.

Ultimately, we discovered just how many times it seemed like the Trump campaign was on the verge of a catastrophic implosion – and how social media shaped our memories of the raucous primary process in ways that, looking back, didn't always measure up to reality.

We also laid bare the snake-tangle of staff tensions and disagreements that came to be emblematic of the Apprentice-style governance Trump brought to his White House. Former campaign officials have very different memories of how the 13-month journey to the 2016 Republican National Convention in Cleveland unfolded.

Check out the full Trump takeover oral history and our additional stories here:

A top former Trump aide acknowledged the 2016 campaign did pay actors to appear at his big 2015 presidential campaign announcement after denying it to Insider five years ago. Trump team's pre-debate prep included a 'party' with Aerosmith guitarist Joe Perry. His band still slapped Trump with a threat to sue later, though. Melania Trump agreed with her husband that then-Sen. John McCain wasn't a “war hero.” Melania Trump didn't think her husband would win the White House in 2016, according to former Trump attorney Michael Cohen.A Bill Clinton staffer had to tell the ex-president about the infamous Trump-Rubio 2016 debate fight over penis size. Trump aides told him over a McDonalds' meal to stop bitching about losing the Iowa Caucus in 2016. Key moments where Ted Cruz tried to steal the 2016 nomination away from Trump. Trump's future DOJ spokeswoman said the Republicans who lost to Trump in 2016 reminded her of the people who lost to Hitler.

Source: We talked to 22 insiders with front row seats to Trump’s hostile takeover of the GOP

Fauci says he’s ’concerned’ about a potential uptick in COVID-19 cases from Sturgis Motorcycle Rally, which draws thousands of bikers

I tried 4 of the sandwiches on Subway’s new menu. While they’re a step in the right direction, it might be too little too late.