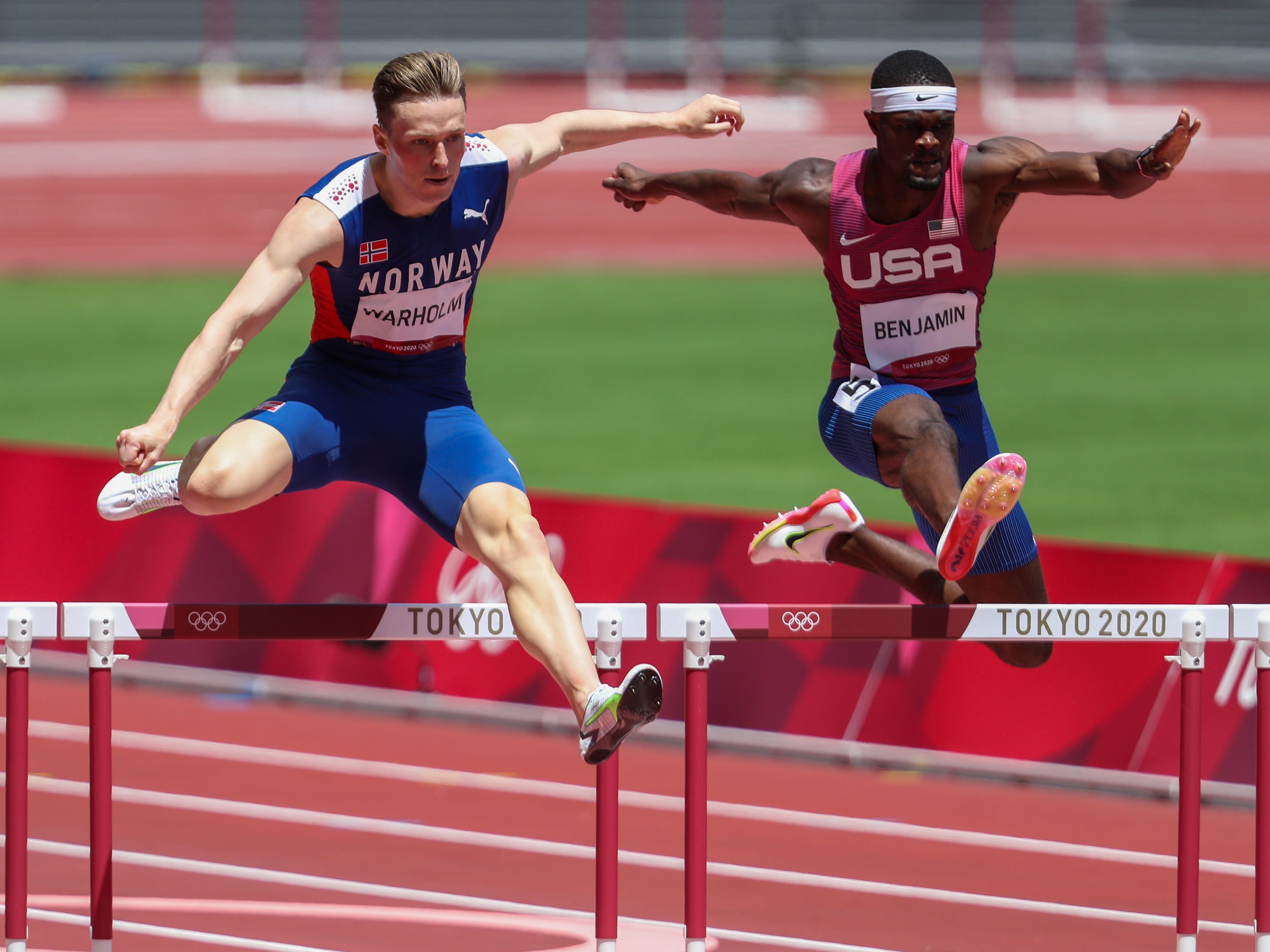 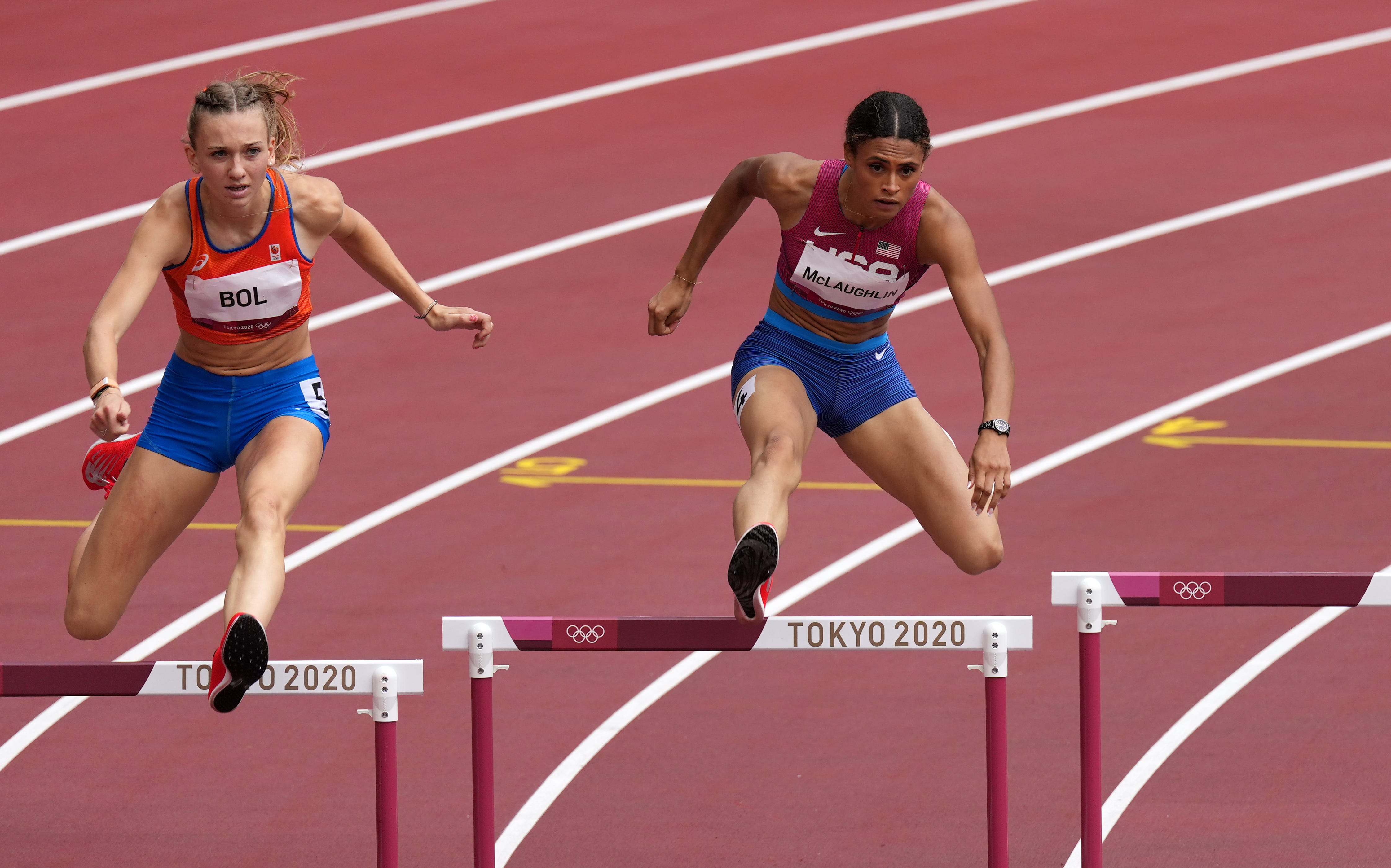 US sprinter Sydney McLaughlin in the women's 400-meter hurdle final at the Tokyo Olympics on August 4, 2021.

During the Olympic trials in June, US sprinter Sydney McLaughlin broke the world record in the women's 400-meter hurdle event, finishing in less than 52 seconds. Then on Wednesday, McLaughlin broke her own record by almost half a second at the Tokyo Olympics. The next runner to cross the finish line also broke McLaughlin's June record, yet had to settle for silver.

It was the same story on the men's side: The winner and runner-up of the 400-meter hurdle final both smashed the previous world record.

All four of these runners, as well as many others this year, were wearing a relatively new type of shoe technology known as super spikes.

“If we look at the whole landscape, most people are convinced these 'super spikes' are definitely a factor,” Laura Healey, a researcher in Puma's footwear innovation department, told Insider.

Super spikes are any track and field shoes that utilize the combination of a stiff plate and pliable foam to give runners more energy back with each footfall. Nike debuted the first such spikes in 2019, forcing companies like Adidas, Puma, New Balance, and Saucony to design their own versions.

These new spikes are changing what's possible on the track, though that's leading some former and current track stars to worry about the integrity of the sport. Here's how super spikes work.

Lightweight, resilient foam is the key to energetic efficiency In the past, spikes were designed simply to protect the bottom of a runner's feet and give traction (spikes, in this case, refers to shoes, not the tiny pointed pieces of metal of the same name). They were made to be as light as possible, with almost no foam – “kind of like functional sandals,” Geoff Burns, a sport performance researcher at the University of Michigan, told Insider.

That's because older types of foam were heavy; think of the ethylene vinyl acetate that's used in exercise mats, for example. So every 100 grams of foam meant about a 1% loss in energetic efficiency. But then came new foam formulations like Nike's ZoomX, which uses polyether block amide, or Pebax, foam. Pebax is almost miraculously lightweight.

“It was mind-blowing, and allowed shoe companies and scientists to rethink their assumptions,” Burns said. “What a shoe could do for the body changed.”

The new foam is softer than its predecessors – offering athletes more comfort as it's compressed – and remarkably resilient. After ZoomX foam gets squished, it bounces back to its original shape, returning 85% of the energy that the runner used to compress the foam. (By comparison, ethylene foam gives back between 60% and 70%.)

“That's why we didn't see super spikes until now,” Healey said. “Previously, the foam wasn't resilient enough to merit adding it into the shoe.” 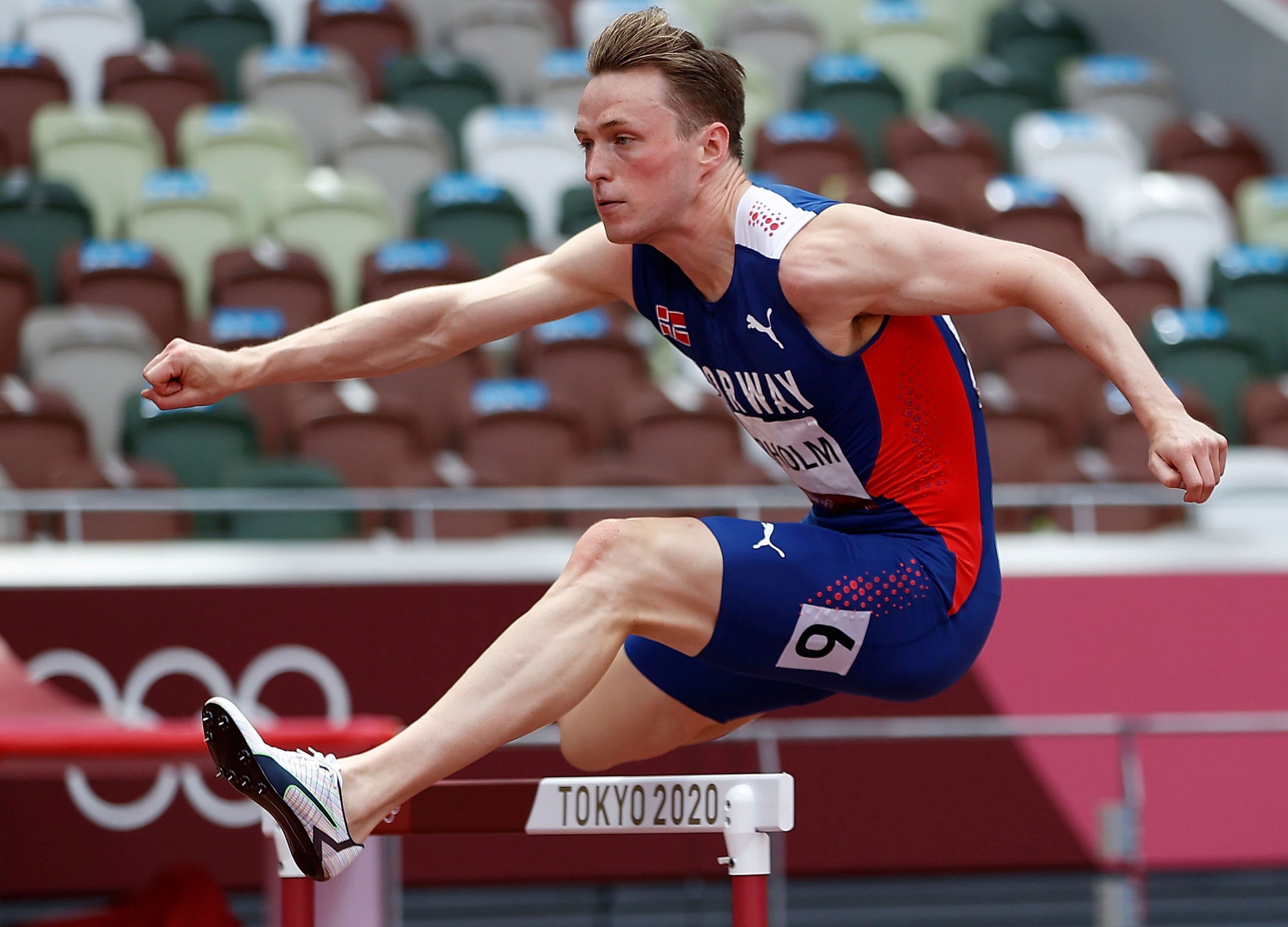 Karsten Warholm in the men's 400-meter hurdles final at the Tokyo Olympics on August 3, 2021.

The super spikes' other key component, stiff plates made of carbon fiber or hard plastic, help sprinters run on their toes. Most people run heel-to-toe, striking the ground with the back of their foot then rolling forward to push off with their toes. But that's an energetically costly process that involves slowing down with each step, according to Kyle Barnes, a marathoner and movement-science researcher at Grand Valley State University in Missouri.

Barnes told Insider that when he tried Nike's ZoomX Dragonflys, a super spike Nike released a year ago, the shoes instead “teeter-tottered” forward, keeping him running solely on his toes and midfeet.

“Like a glorified version of falling down a hill,” he said. 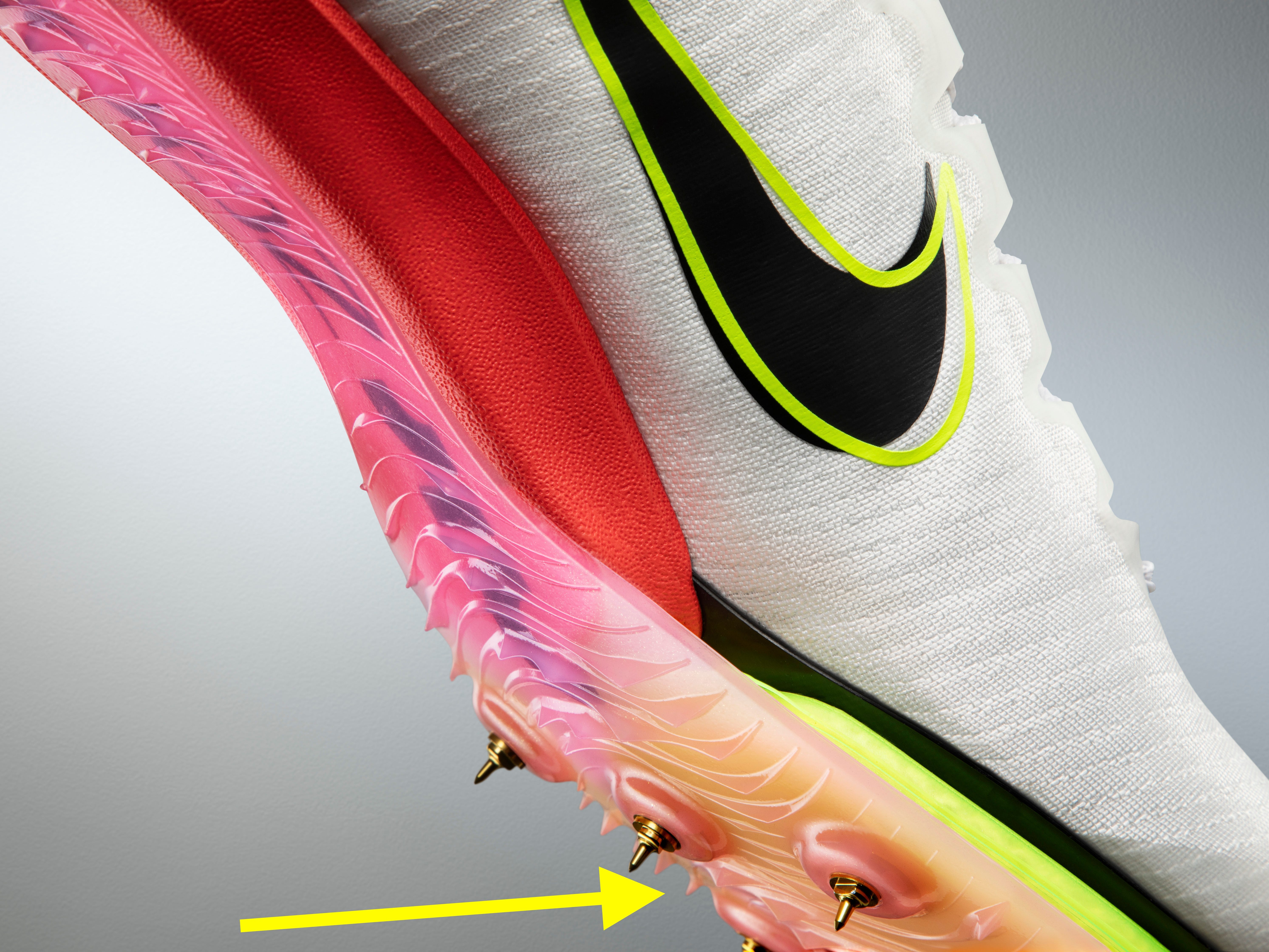 A shot of the underside of a Nike Air Zoom Maxfly shoe.

Since Nike released its first super-spike prototypes in 2019, runners using the shoes have broken records in the 1,500-meter, 5,000-meter, and 10,000-meter events, Outside Online reported. Although other brands now utilize similar designs, some athletes are still concerned that Nike shoes confer an unfair advantage.

Warholm, who is sponsored by Puma, called the technology “bulls—,” comparing the soles to trampolines and saying the shoes take credibility away from the sport.

Healey said that although Warholm's Puma super spike has a carbon-fiber plate similar to Nike's, Nike's air unit “has a higher energy return than foams, and Nike has patented this tech.”

Nike, meanwhile, told Insider that the same three components – carbon fiber, foam, and air – have all been used in running shoes for decades, both Nike's and others.

“We're just smarter about how we engineer and assemble them,” the company said.

Usain Bolt, too, has complained about super spikes, though he did not call out Nike specifically. Bolt, who won the men's 100-meter and 200-meter sprints at the 2008, 2012, and 2016 Olympics, said super spikes give current runners an advantage over previous record-holders. “It's weird and unfair for a lot of athletes,” Bolt told Reuters.

None of the super spikes in use at the Tokyo Games violate any rules, according to guidelines from World Athletics, the international governing body of track and field.

Burns said super-spike technology probably matters less for shorter races, including the 400-meter, since energetic efficiency is less of a factor when a race is over in under a minute.

“Sprinting is constrained by absolute power output,” he said.

According to Burns, Nike's super spikes are essentially pared down versions of the company's successful Vaporfly shoe, which have changed the marathon world over the last five years.

“It's the same basic recipe,” he said. “They've taken their lessons from the road shoe and adapted them to the track.”

Vaporflys are the road-running versions of super spikes – they also have a stiff plate and resilient foam. A Nike-funded study by independent researchers found the shoes confer about 4% more energy efficiency per footfall. Athletes using Vaporflys dominated the Rio Olympics in 2016, as well as every major long-distance road race thereafter.

Competing companies scrambled to catch up to the Vaporfly tech, then had to do so again after Nike debuted its first super spikes Burns thinks the Olympics' year-long delay bought those competitors time to catch up.

“Had the Olympics happened last summer, this would've been a joke,” he said. 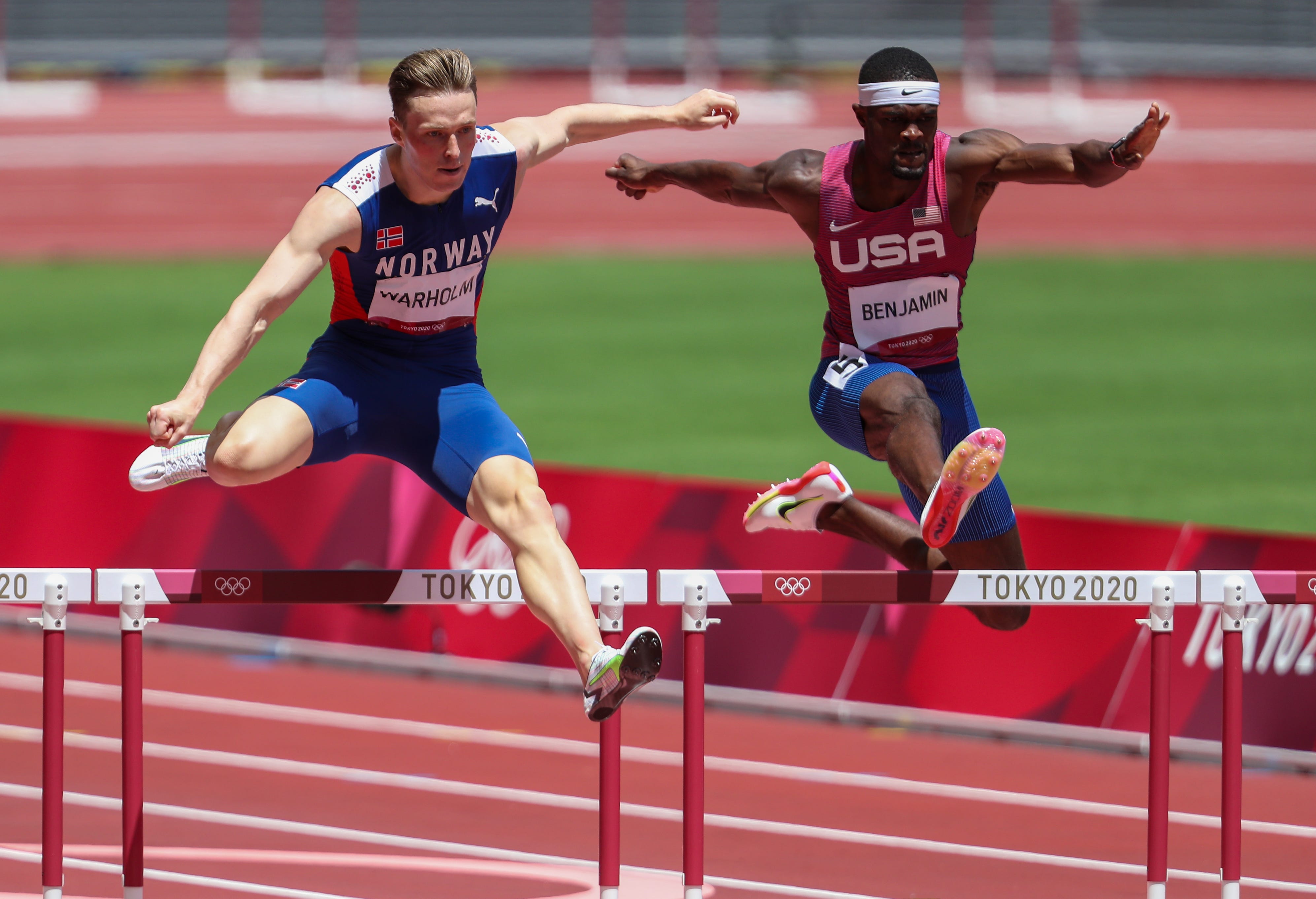 Karsten Warholm and Rai Benjamin compete in the 400-meter hurdles final in Tokyo on August 3, 2021.

Nike's spikes don't come with a neat number like the Vaporfly's 4% energy savings, since that figure was calculated based on how much oxygen athletes suck in and carbon dioxide they let out. That measure becomes meaningless when runners cross from aerobic exercise – which uses oxygen – into anaerobic work, which doesn't. Almost all sprinting is anaerobic.

Still, Burns estimated Nike's super spikes might confer about an energy advantage of 1.5% to 2%.

“When I look at the 1,500-meter result, in the back of my mind I'm thinking two to three seconds faster,” he said, adding, “I hate to say it, it's sort of become an arms race.” 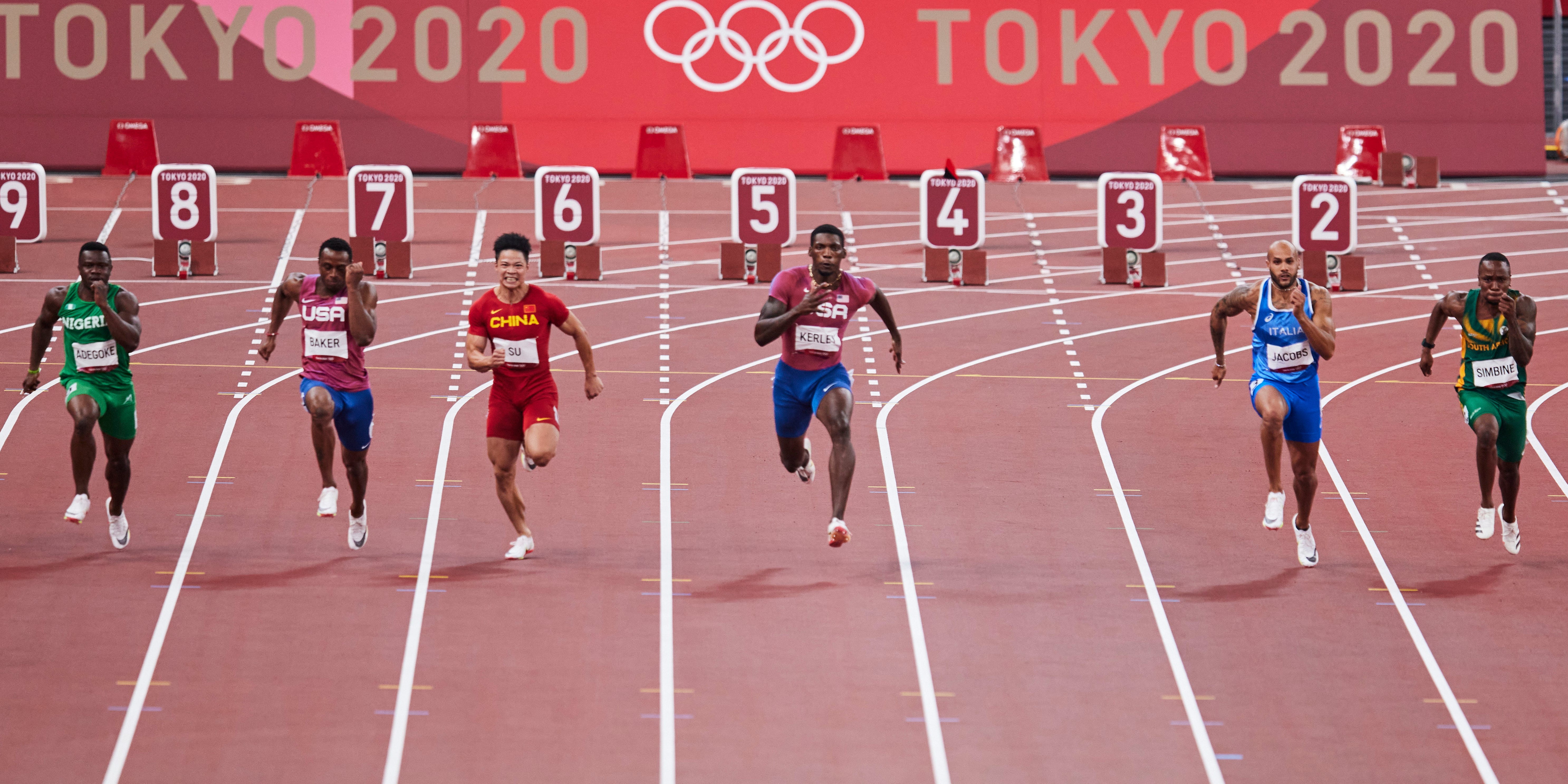 Sprinters compete in the final of the men's 100-meter sprint at the Tokyo Olympics, August 1, 2021.

Nike, for its part, said runners' achievements are never about their shoes alone.

“Time and again, we've proven in our labs that Nike racing shoes and spikes provide measurable benefits – but ultimately, it's the athletes on the track and on the roads who validate our work,” the company said.

Healey said a lot of new super spikes confer an advantage that's in the same ballpark as Nike's.

“It doesn't seem to be all Nike shoes on the podium,” she said. “We're in a new era of super spikes.”

Cam Newton not on anybody’s radar