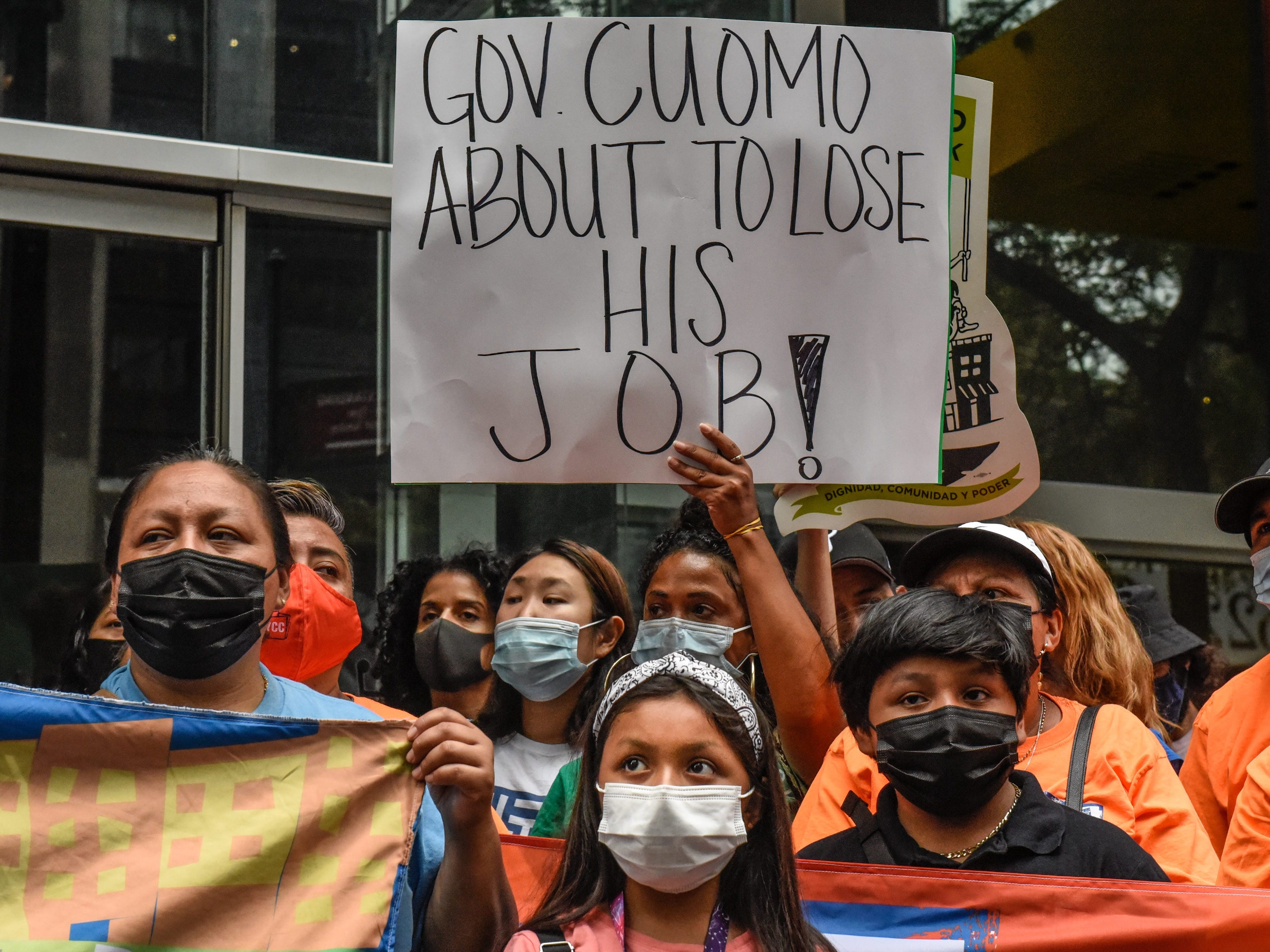 People participate in a protest against NY Gov. Andrew Cuomo and protest for a moratorium on evictions on August 4, 2021 in New York City.

70% of self-identified NY voters said Cuomo should resign. 55% believe he should be charged with a crime.
The same Quinnipiac poll in March found that just 43% thought he should resign.
48% of respondents had no opinion of Lt. Gov. Kathy Hochul, who would replace Cuomo.
See more stories on Insider's business page.

More significantly, 55% of New Yorkers polled said Cuomo should face criminal charges for his actions. One of Cuomo's accusers filed a criminal complaint with the Albany sheriff's office on Friday.

The poll also indicated that New Yorkers overwhelmingly believe the women that have come forward, with 65% saying that they think Cuomo sexually harassed multiple women.

Only 28% of respondents said they approved of the job the governor's doing, while 63% disapproved. However, Cuomo remains above water with New York Democrats: 47% approve of the governor's job performance, while 44% disapprove.

Nonetheless, the condemnation of the governor is across the board, with majorities of Democrats, Republicans, and independent voters saying Cuomo should resign or be impeached.

The poll comes just days after NY Attorney General Letitia James released a report on sexual harassment allegations made by 11 women against the Governor. President Joe Biden, House Speaker Nancy Pelosi, NYC Mayor Bill de Blasio, and the entire NY congressional delegation have called on the governor to step down, and the state assembly is nearing the conclusion of an impeachment inquiry.

Cuomo's possible replacement, Lieutenant Governor Kathy Hochul, appears to be little-known to New Yorkers. Forty-eight percent of respondents did not offer an opinion of the Buffalo politician and former US representative, while 31% said they approved of her job performance.

The Quinnipiac University poll, conducted on August 4th and 5th, included 615 self-identified registered voters in New York and had a margin of error of 4 percentage points.

Source: 70% of New Yorkers say Cuomo should resign and 55% think he should be charged with a crime: poll

ESPN+: All your questions answered about ESPN’s streaming service

13 essential products for cooling down your stuffy college dorm room