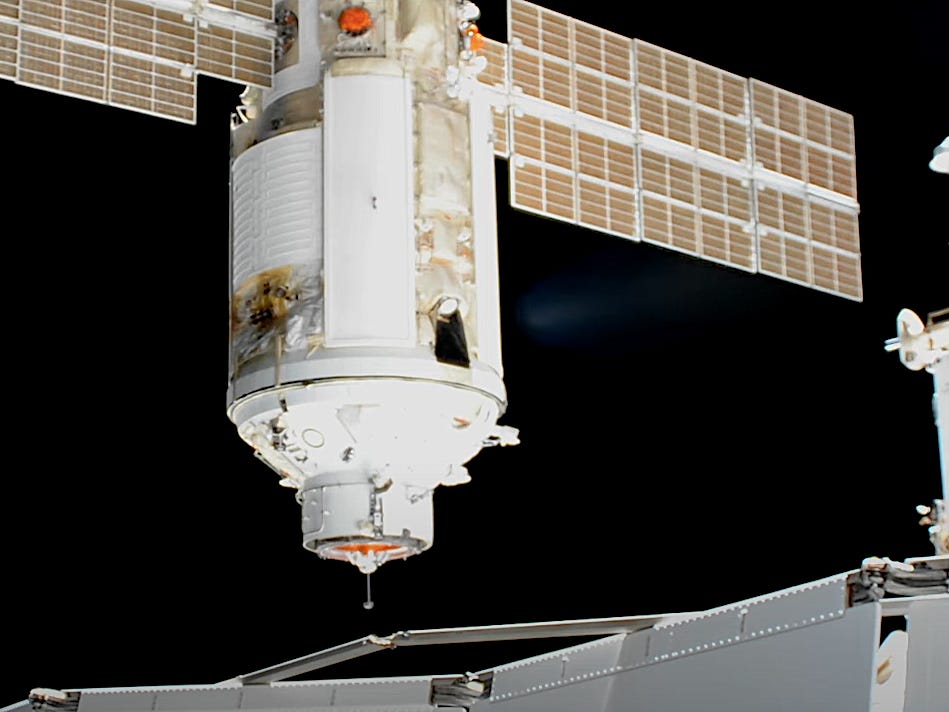 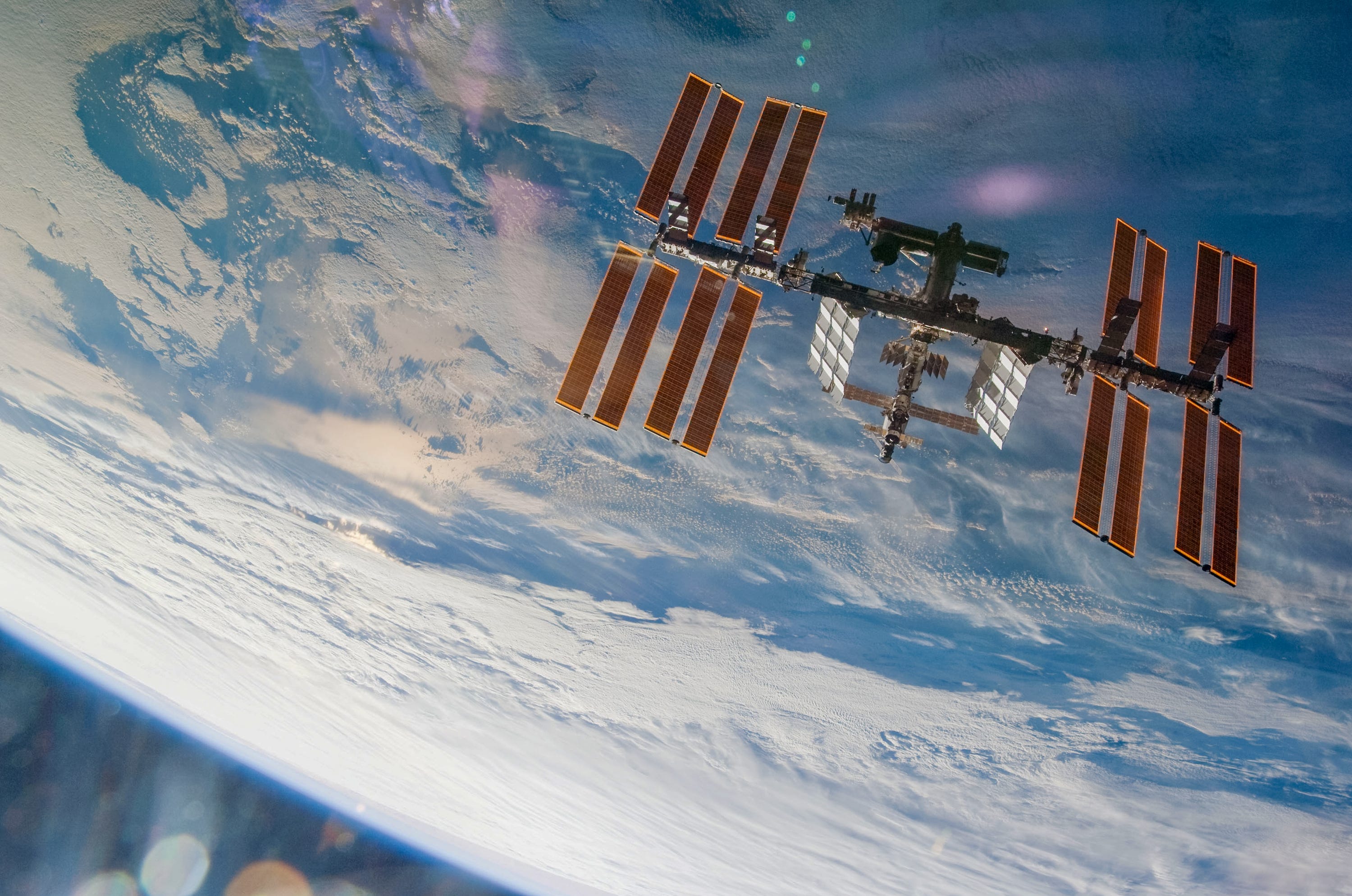 The International Space Station as seen by astronauts from NASA's space shuttle Endeavour on February 19, 2010.

Russia's new space station module, Nauka, mistakenly fired its thrusters after docking on Thursday.
The mistake caused the entire space station to spin around 540 degrees and flip upside down.
NASA and Russian flight controllers were able to get it back to its original position after an hour.
See more stories on Insider's business page.

The International Space Station did some orbital acrobatics on Thursday, after a new Russian module malfunctioned.

A few hours after it had docked to the ISS, the module – called Nauka – started unexpectedly firing its thrusters, essentially trying to pull itself away from the football-field-sized station. A tug of war ensued between the errant module and the four gyroscopes that typically keep the ISS steady. Nauka's thrusters wound up spinning the station around and flipping it over.

“It's exactly like doing a back flip,” Zebulon Scoville, a NASA flight director who was in charge of mission control on Thursday afternoon, told The New York Times.

NASA reported Thursday that the station had rotated 45 degrees. But Scoville told the Times that figure was “a little incorrectly reported,” and the ISS actually spun 540 degrees, or one-and-a-half times around, before coming to a stop upside down.

It took NASA and Russian flight controllers an hour to return the ISS to its original orientation. 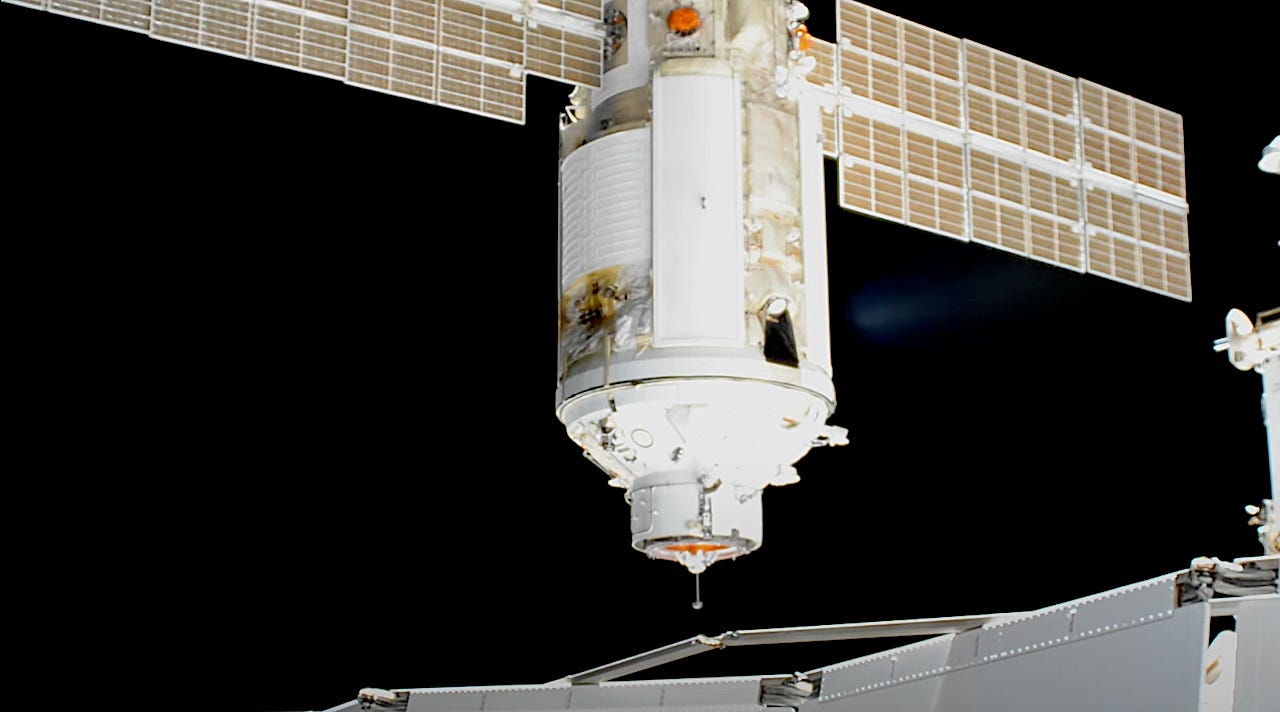 A screenshot from NASA's livestream shows the Nauka module approaching its port on the International Space Station, July 29, 2021.

Nauka had already encountered several technical issues on its way to the ISS, but once it docked, all seemed fine – until computers at mission control suggested otherwise.

“We had two messages – just two lines of code – saying that something was wrong,” Scoville told the Times.

At first, he said, he thought it could be a false alarm.

“And then I looked up at the video monitors and saw all the ice and thruster firings,” he said, adding, “You get about half a breath of 'Oh, geez, what now?' and then you kind of push that down and just work the problem.”

Russian mission controllers in Moscow told NASA that there was no way to contact Nauka to turn off the thrusters, the Times reported, since the module can only receive commands from the ground. It would be another 70 minutes until the space station was over Russia.

So Scoville and his colleagues had to come up with an immediate alternative. Flight controllers fired thrusters on two other parts of the Russian side of the ISS to try and get the station back into position. US and Russian flight controllers told the crew members aboard the ISS to lock down the station's radiators and solar arrays.

Currently there are two cosmonauts, Oleg Novitskiy and Pyotr Dubrov, aboard the station, as well as and five astronauts: Akihiko Hoshide of the Japan Aerospace Exploration Agency, Thomas Pesquet of the European Space Agency, and Shane Kimbrough, Megan McArthur, and Mark Vande Hei of NASA.

NASA lost contact with the space station twice, for a total of 11 minutes, according to the Times.

Eventually, Nauka's thrusters shut off, likely because they ran out of propellant.

“After doing that back flip one-and-a-half times around, it stopped and then went back the other way,” Scoville said.

By 1:30 p.m., NASA announced the station had returned to its proper position. Russian flight controllers confirmed to NASA 45 minutes later that they had disabled Nauka's errant thrusters.

The space station seems to be in good shape 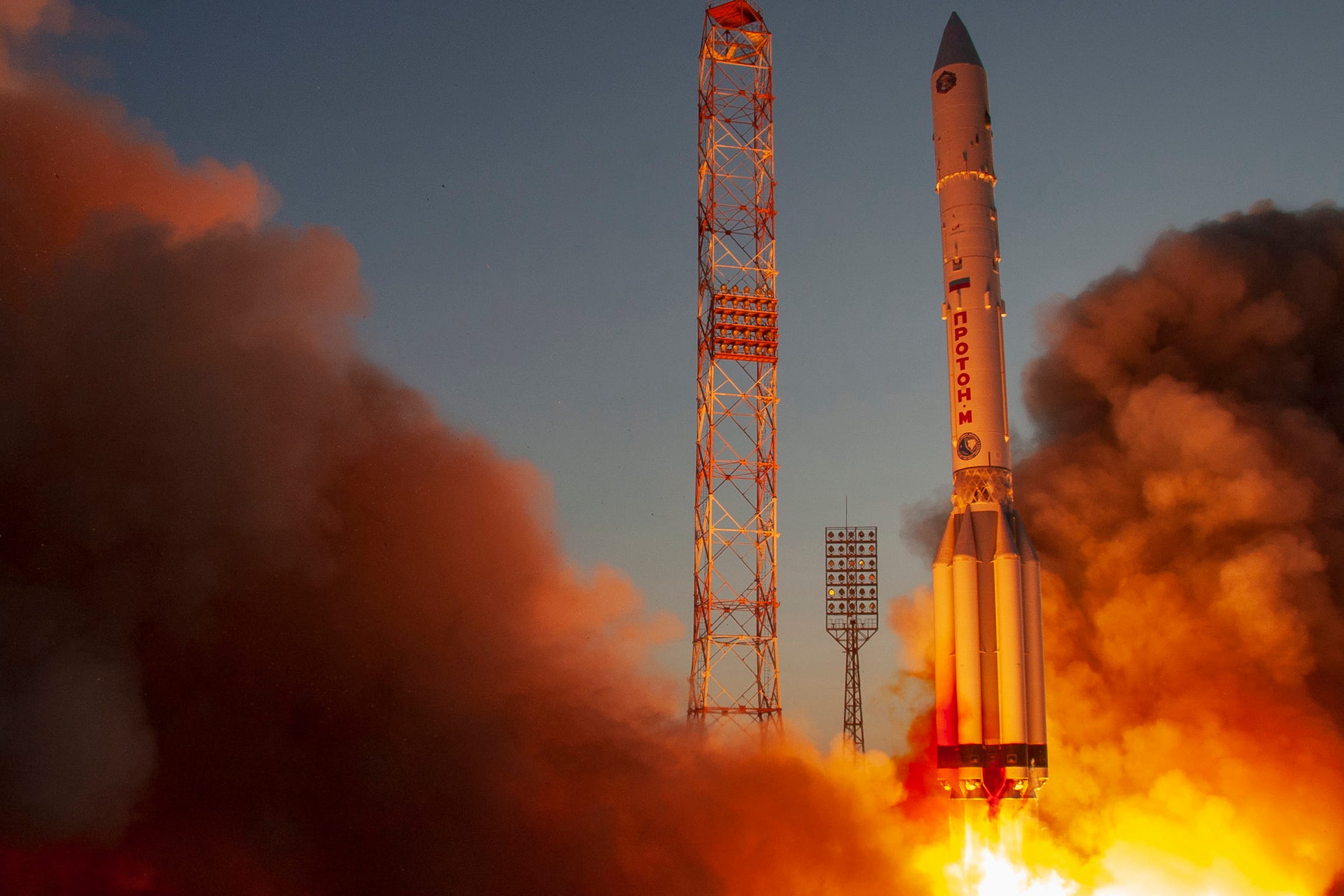 Russia's space agency, Roscosmos, is investigating the cause of Nauka's mishap.

“Due to a short-term software failure, a direct command was mistakenly implemented to turn on the module's engines for withdrawal,” Vladimir Solovyov, flight director of Russia's segment of the ISS, said in a statement on Friday.

Preliminary analysis indicates that the space station remains in good shape, though.

“All other station systems are operating perfectly,” NASA said on Thursday afternoon. “None of the other appendages were damaged in any way.”

A sudden loss of control over the space station's orientation is not common, NASA said, but there are procedures in place to address such an issue when it does arise. Occasionally, flight controllers also deliberately change the ISS's orientation to avoid space debris or make it easier for a spacecraft to dock. 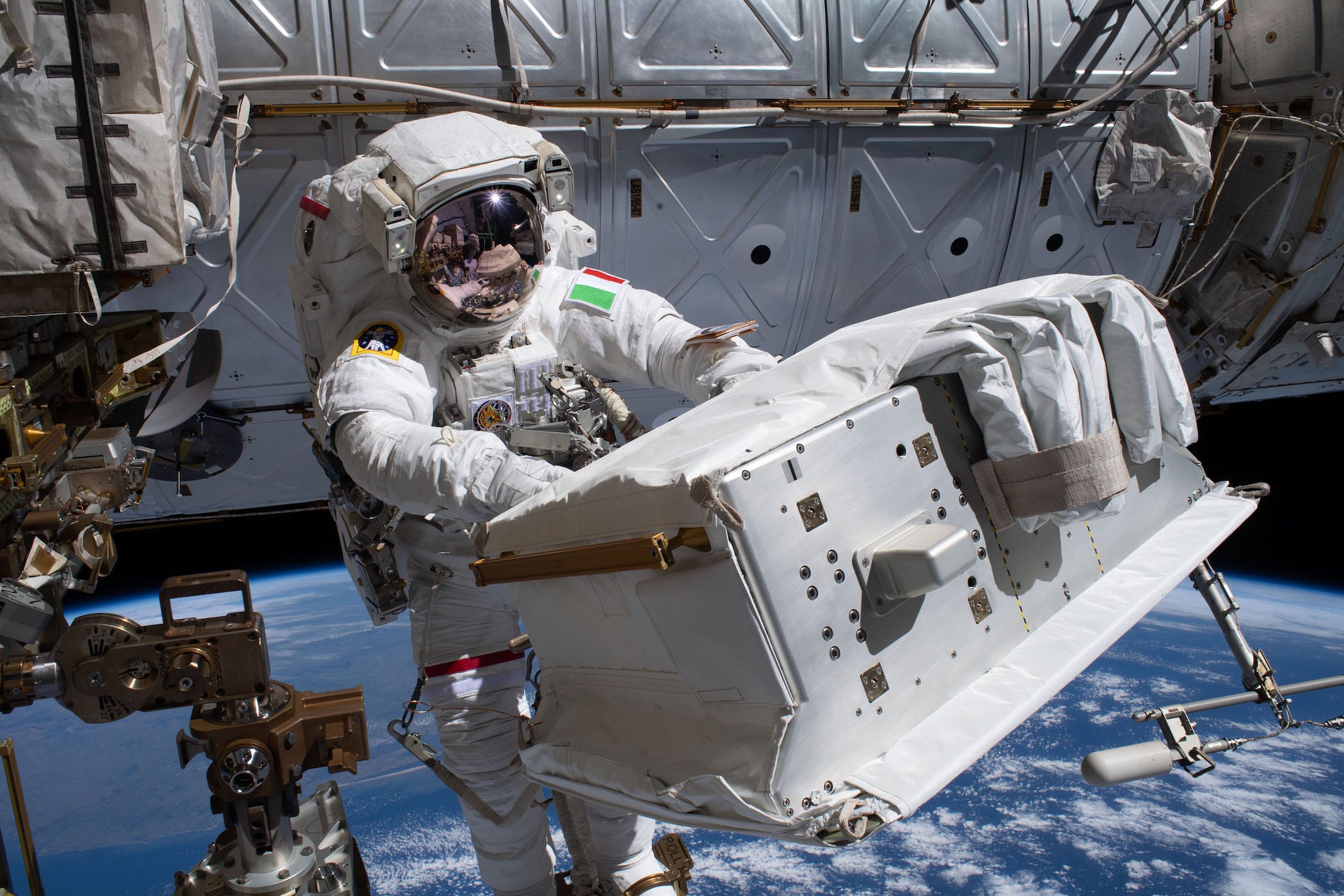 The crew was never in danger, according to NASA. They didn't even feel the station move or shake.

That said, Scoville told the Times that this was the first time he's had to declare a “spacecraft emergency” in seven years as a flight director.

NASA defines such an emergency as “an anomalous state” that, should it continue, would result in the loss of the entire space station.

“We knew we had a limited amount of time,” Scoville said.