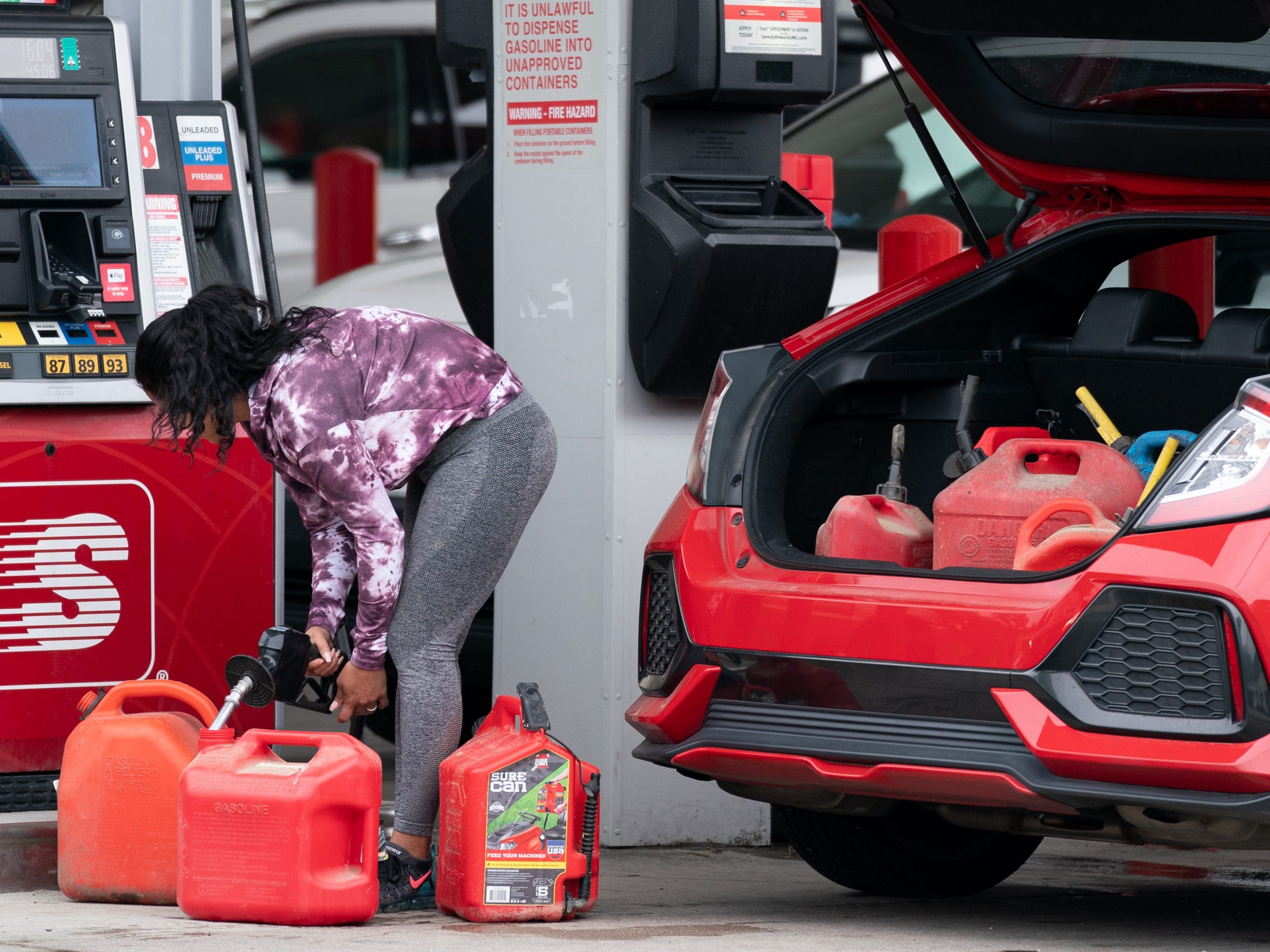 A woman fills gas cans at a Speedway gas station on May 12, 2021 in Benson, North Carolina.

Gas prices are expected to remain at their highest level since 2014 over Fourth of July weekend.
Some states have already reported fuel outages due to a lack of oil tank drivers.
As nearly 44 million Americans hit the road on the holiday weekend, the fuel shortage will be compounded.
See more stories on Insider's business page.

As millions of Americans hit the road for the Fourth of July weekend, many will be forced to grapple with elevated fuel prices and a gasoline shortage.

The national average fuel price during the holiday weekend will be about $3.11 per gallon – 43% higher than this time last year and about 2% higher than Memorial Day weekend – according to a GasBuddy analysis.

There have also been several fuel outages reported at gas stations across the country. Gas stations in Northern California, Colorado, and Iowa have run out of gas, according to Tom Kloza, the global head of energy analysis for the Oil Price Information Service, told CNN. GasBuddy analyst Patrick DeHaan told the publication that Indianapolis and Columbus, Ohio have also reported gas outages and the number of stations in the US facing shortages is continuing to grow.

Nearly 44 million Americans are planning to take a road trip this holiday weekend, according to a AAA report. But, Kloza said the shortages have not been caused by a spike in demand or OPEC production rates. Instead, a shortage of oil tank truck drivers has made it difficult for gas stations to get fuel deliveries.

“It used to be an afterthought for station owners to schedule truck deliveries,” Kloza told CNN. “Now it's job No. 1.”

Transportation is one of many industries facing a labor shortage in the wake of the pandemic. But, unlike other transportation roles, oil tank drivers are required to have special qualifications, making it even more difficult to find drivers with the necessary expertise. An analysis by the National Tank Truck Carriers in April found that 20% to 25% of oil tank trucks are not in use due to the shortage of drivers.

Independence Day weekend will likely compound the fuel shortage as demand peaks. Kloza said drivers could face the same situation they were forced to grapple with in May when the Colonial Pipeline hack pushed Americans to panic-buy gasoline, causing thousands of gas stations to run out of fuel.

GasBuddy predicts average gas prices will remain above $3 per gallon this summer and eventually fall back into a $2 national average range later in the fall.

Source: Gas stations in some states are running out of fuel ahead of Fourth of July weekend and an oil-truck-driver shortage is to blame