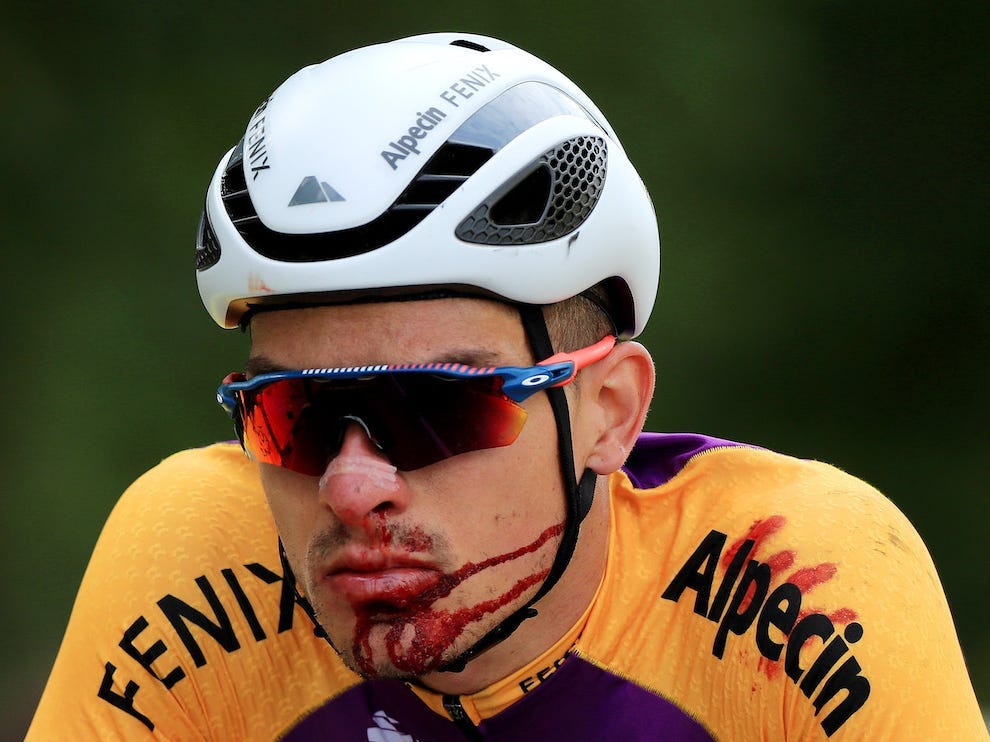 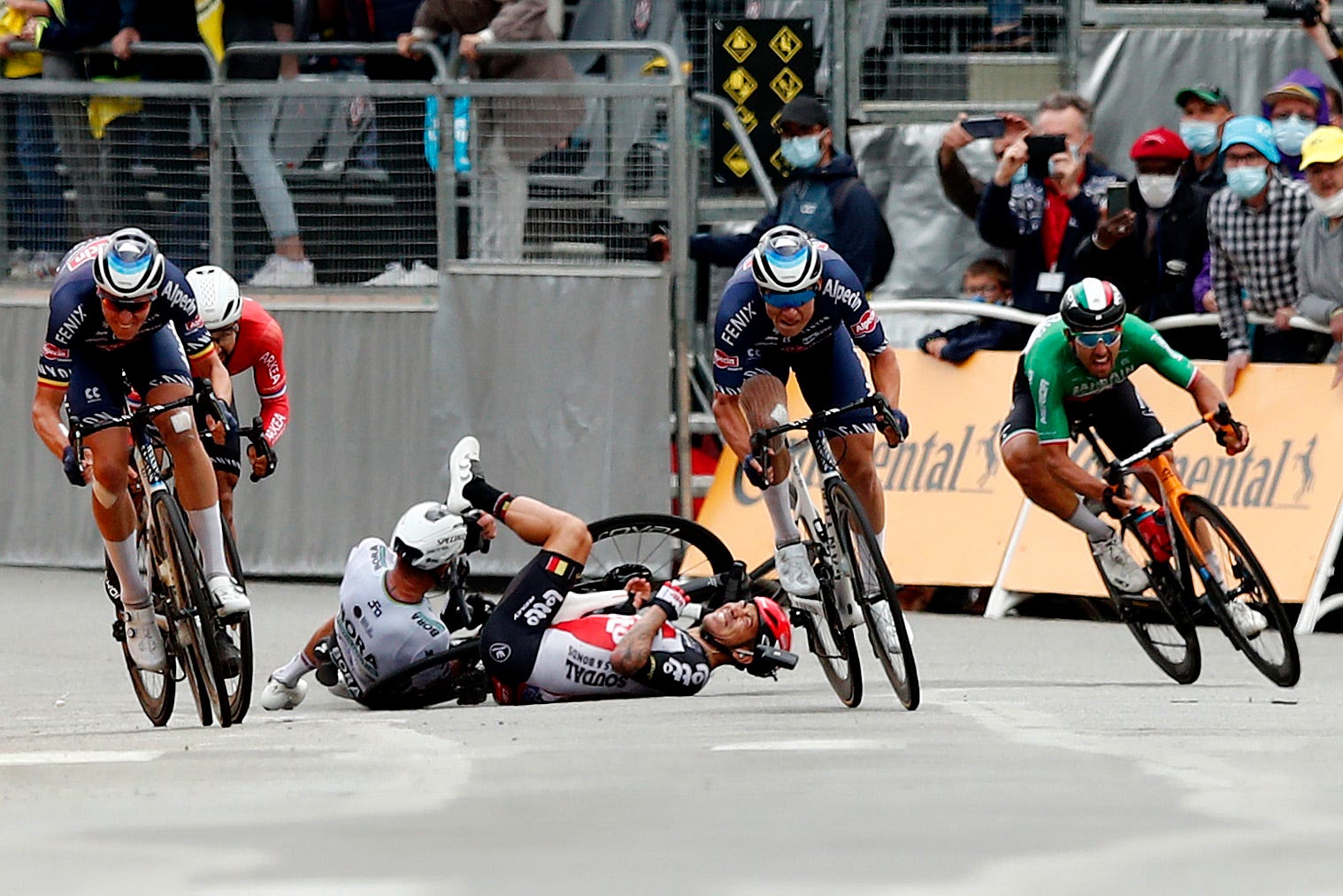 Dramatic crashes at the Tour de France this week are making headlines.
Riders are crashing because of pressure, routes, and a careless spectator, a US team boss told us.
Such crashes are unfortunately fairly normal for the Tour, he said.
See more stories on Insider's business page.

We're three days into the Tour de France, but it feels like three weeks.

We've seen serious high-speed crashes bring down dozens of riders. In one incident that went viral, a spectator caused a massive pile-up when she stuck her cardboard sign into the peloton. In other crashes, we've seen riders “touch wheels” and go flying to the ground.

Amid all the crashing and carnage, we've seen large groups of riders vying for position along narrow roads featuring numerous roundabouts and “road furniture” like speed bumps.

After Monday's stage, which saw several crashes – most notably those involving overall favorites Geraint Thomas (Ineos-Grenadiers) and Primož Roglič (Jumbo-Visma) and sprinters Caleb Ewan (Lotto-Soudal) and Peter Sagan (Bora-Hansgrohe) – some riders complained about what they described as a dangerous route.

There's speculation there might be a rider protest on Tuesday.

On Monday afternoon, I asked the Tour organizer, the Amaury Sport Organisation, about the criticism of its routes being dangerous. A spokesman said the ASO had no comment.

The crashes might seem extraordinary, but as US team boss Jonathan Vaughters, who heads up the EF Education-Nippo squad, told me, they are unfortunately fairly common in the world's highest-pressure race.

Read more: Defending Tour de France champ is a 22-year-old Slovenian whose freakish physiology and metabolism mean he can recover 3 times as fast as his rivals

Vaughters was a pro cyclist for a decade and raced in the Tour four times before becoming a team manager. He spoke with Insider by phone from France after Monday's stage three, during which he said he followed the race in the lead team car.

What's going on with all these crashes in the Tour this year?

This is almost a little more back to normal, actually. The Tour is the most dangerous race of the year. 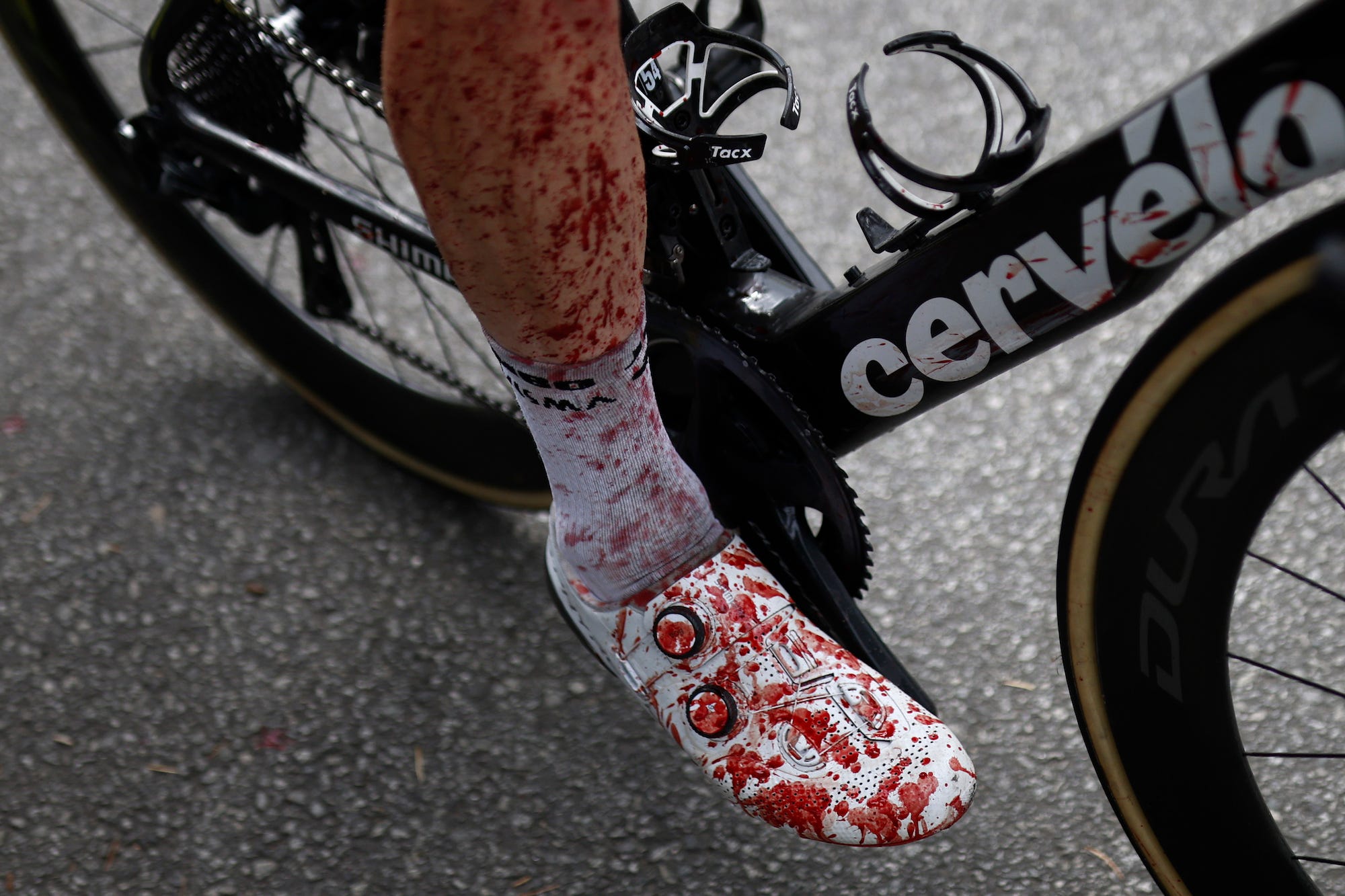 Blood on the leg and shoe of the Netherlands' Steven Kruijswijk. who crashed on the third stage.

Then you get a parcours [route] like today where it's incredibly dangerous – a poorly designed parcours with tons of roundabouts, tons of road furniture, tons of planters, concrete bunkers, God knows what. Like a million and a half speed bumps. And it's a bad combination, a bad mixture. I mean, I hate to say it, but what happened today was not a surprise.

Read more: Watch 'mom of the year' save her kid from all these Tour de France riders crashing around them

I don't think you can blame it on one thing. The fact is the Tour de France is the highest-pressure race in the world. It's the biggest stage for cycling in the world. And nobody hits the brakes. In other races, they'd be, like, 'Oh, this is a dangerous situation. I'd better slow down a bit. I won't fight for that wheel. I'll touch my brakes. I'll let this guy in.' At the Tour de France, nobody lets anybody in; nobody hits their brakes. Today Roglic was all the way to the side of the road trying to move up, and he crashed.

It's just that everyone takes much bigger risks in this race than they do in any other race. And then you combine that with a dangerous parcours, and it's just bad news. 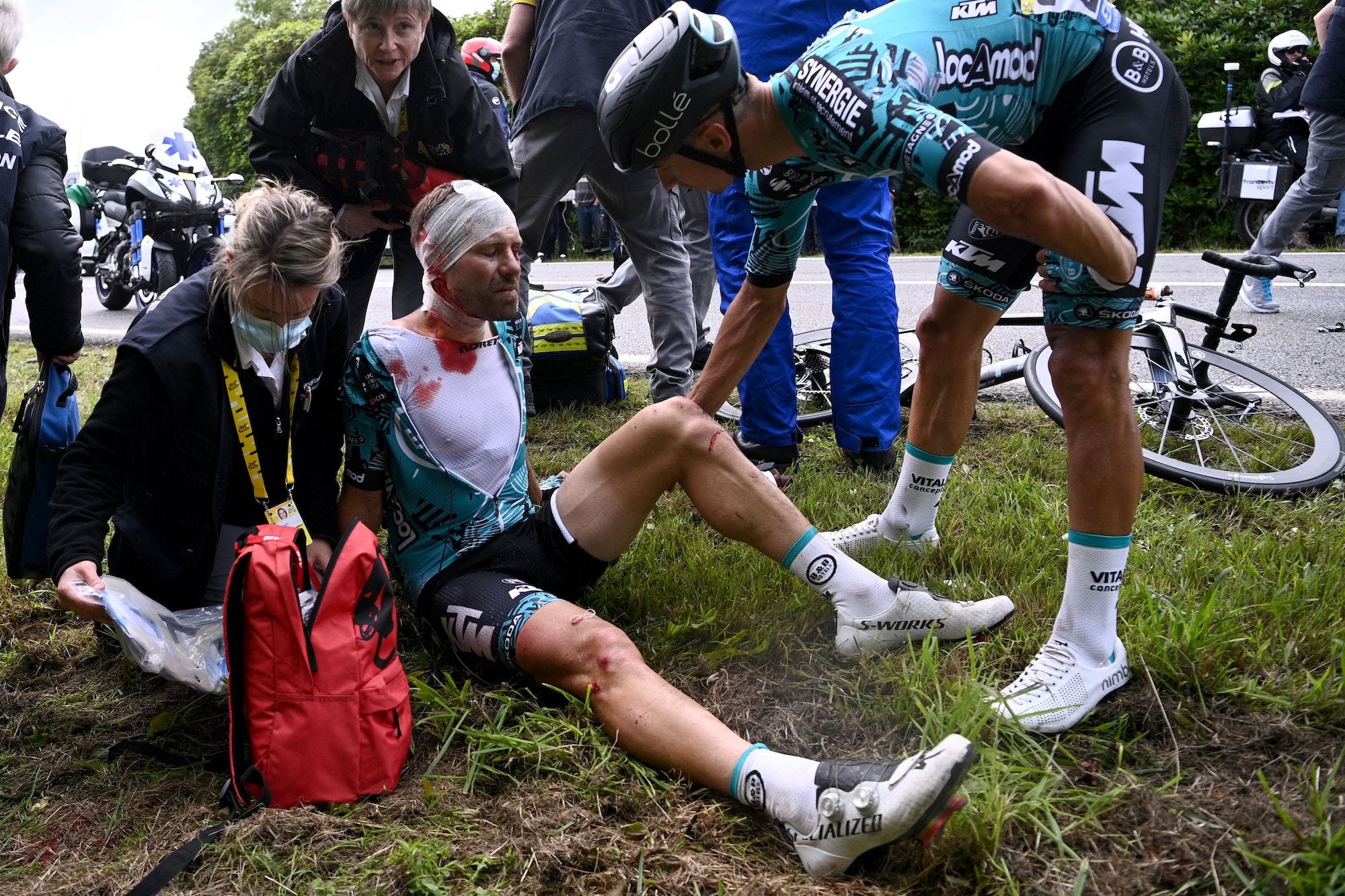 Team B&B KTM's Cyril Lemoine of France after crashing during the first stage.

How is your team, and what do you expect over the next stages?

We're just trying to keep everyone healthy and safe. For us, the time trial, two days from now, can't come soon enough. Because once that time trial happens, that'll calm a few nerves down. There will be a couple people who will lose enough time they'll lose the dream. It should, after the time trial, calm down, at least a little bit.

Source: Why nasty crashes at the Tour de France are business as usual

9 of the best-selling beauty tools and accessories on Amazon