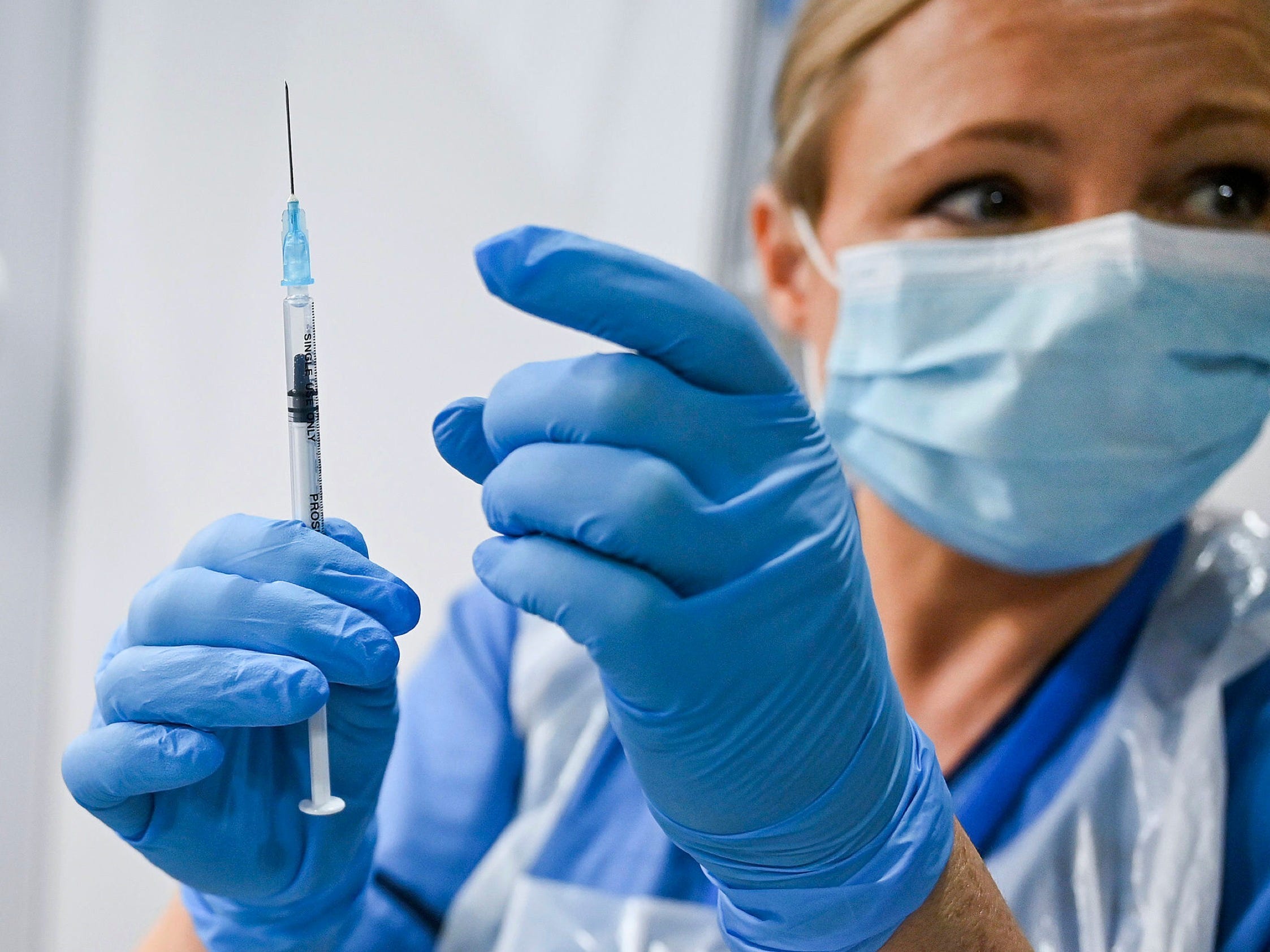 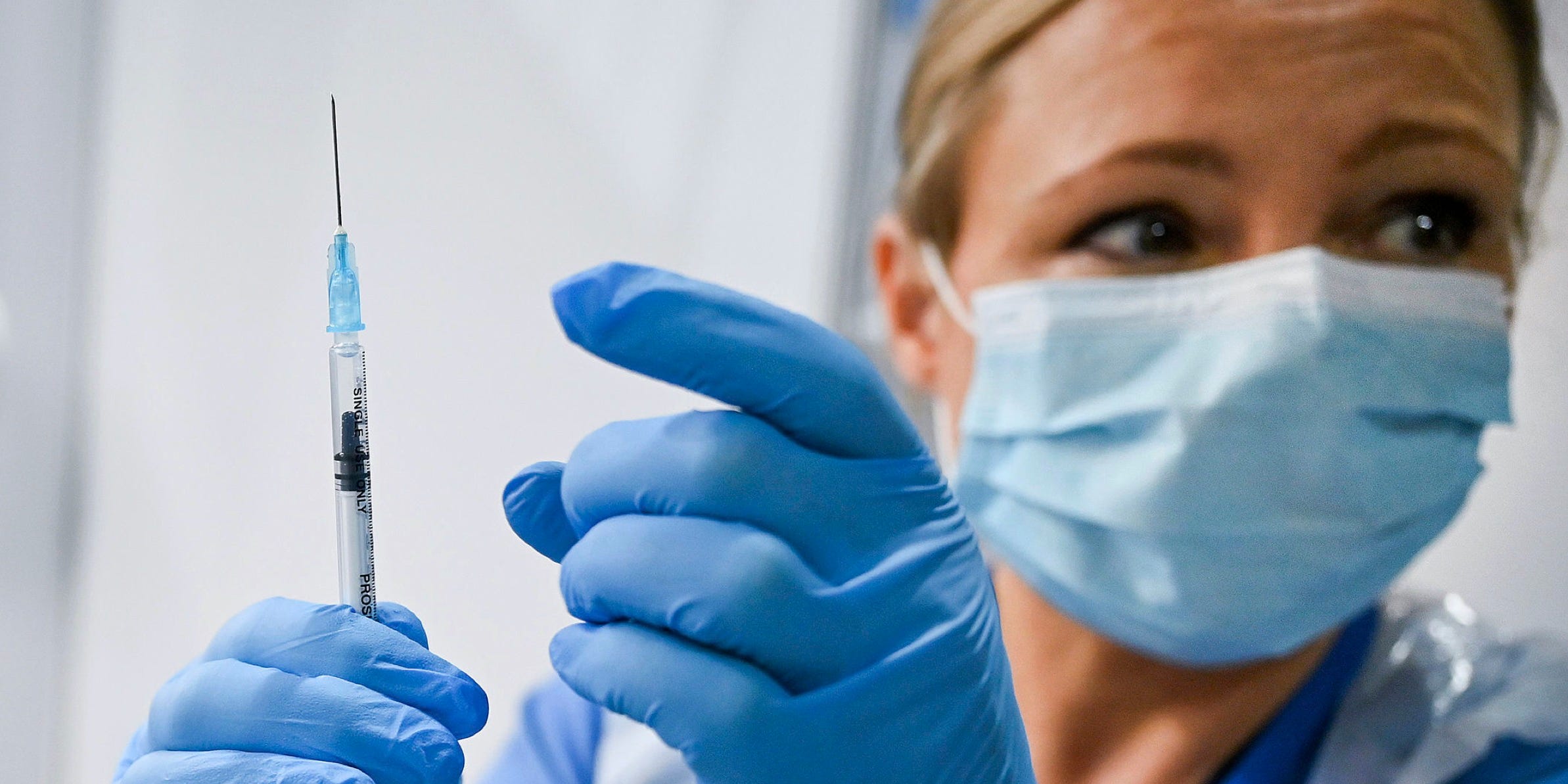 A health worker prepares a shot of the Pfizer vaccine in Glasgow, Scotland, on December 8, 2020.

The Delta coronavirus variant, which is highly transmissible, is spreading rapidly.
But highly vaccinated countries like the UK and Israel are not seeing a rise in deaths or hospitalizations.
Both are taking a more lenient approach to control the virus than in previous surges.
See more stories on Insider's business page.

Amidst a spike in COVID-19 cases driven by the Delta variant, Israel's response was different to before.

“Masks instead of restrictions, vaccines instead of lockdowns,” Israel's prime minister Naftali Bennett said on Sunday.

The country had previously imposed stringent measures to control COVID-19, an approach that successfully led to a drop in cases by early June, allowing space for one of the world's most efficient vaccination campaigns.

This time around, deaths and hospitalizations in the country are not rising in line with the surge in cases, which appears to have blunted the worst of the virus thanks to vaccines. 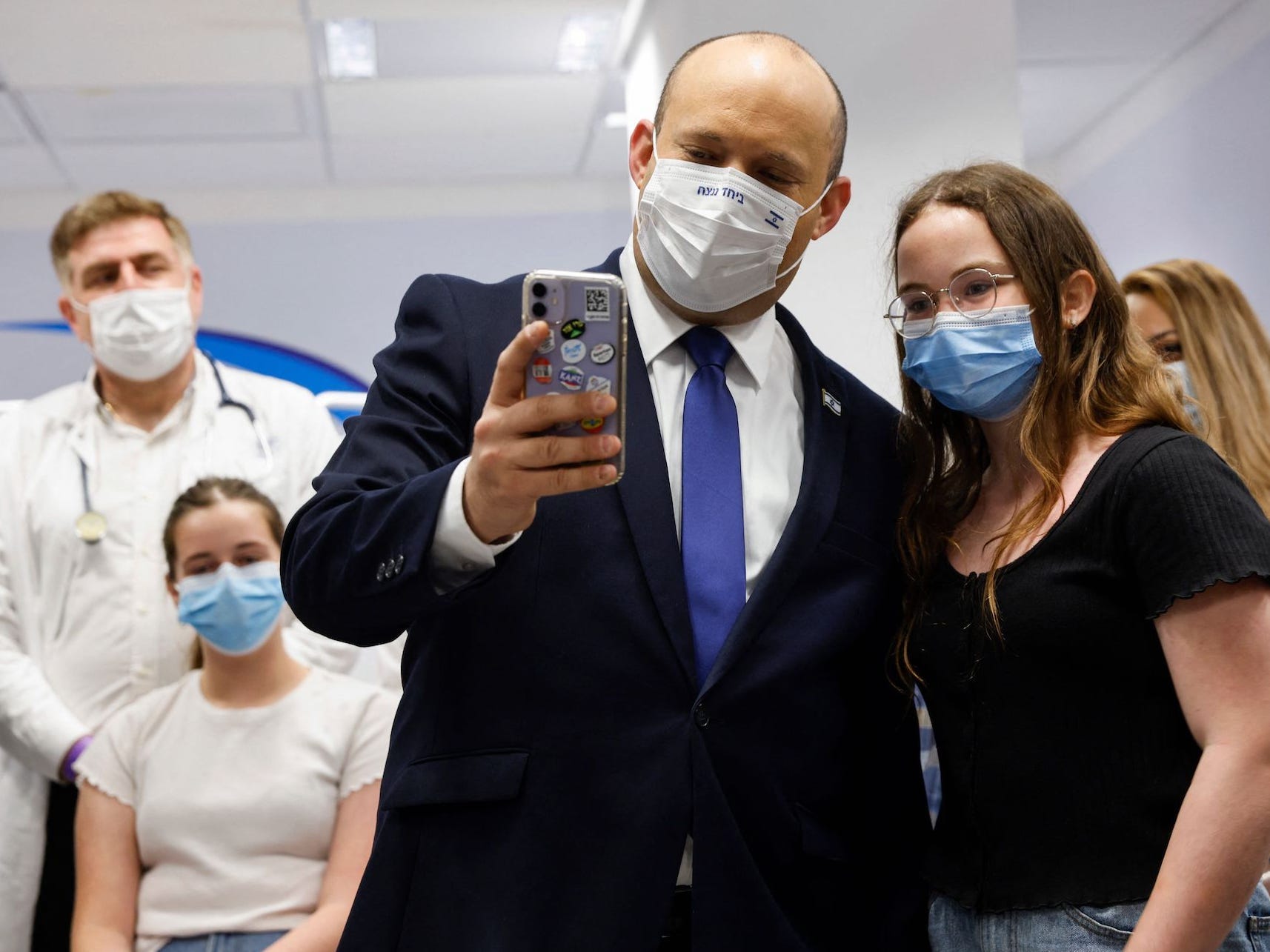 Bennett visiting the a hospital in Tel Aviv on June 29.

A different kind of virus spike

According to the World Health Organization, the Delta variant is the most dangerous strain yet.

It appears 60% more transmissible than the Alpha variant and can break more efficiently through the protection given by one dose of AstraZeneca and Pfizer vaccines, which are only 30% effective against catching the Delta variant in a form which produces symptoms.

However, those sickened after a single dose appear to get more mild COVID-19: one dose of the AstraZeneca shot offers 71% protection from hospitalization, while the Pfizer shot offers 94%, data from the UK shows.

The full treatment of two vaccine doses is even more protective against hospitalization. 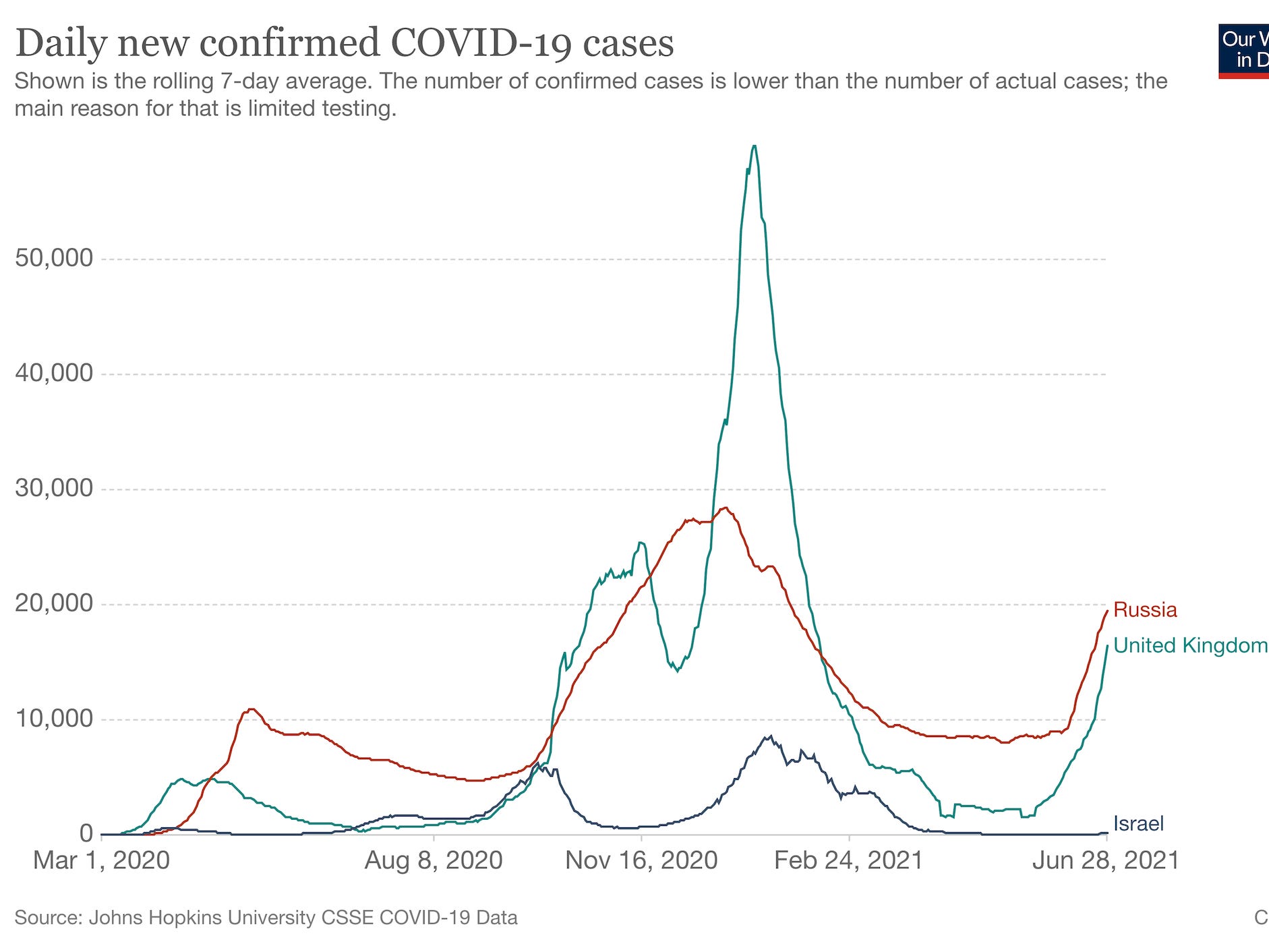 Daily new confirmed COVID-19 cases for Russia, Israel, and the UK as of June 28.

Our World in Data

In the UK, the Delta variant has been driving a surge in COVID-19 cases. As of Monday, the seven-day rolling average of new daily cases was 16,404, five times higher than a month before.

But hospitalization and deaths have not followed that trend. Both are “going up a bit” but remain low, Prime Minister Boris Johnson said on Monday.

On June 28, the seven-day rolling average of new confirmed COVID-19 deaths was 17, compared to eight the month before. The five-fold increase in infections had been followed by a doubling in deaths.

The high rate of vaccination in the country is probably playing a part in this. As of June 27, 48% of the population were fully vaccinated, and 65% had received at least one dose of vaccine, according to Our World in Data.

Israel is seeing a similar trend. The number of daily reported new cases is comparatively low, at about 283 new daily cases as of June 28. But that is up from about 15 new daily cases in the first half of June, according to data from the Health Ministry.

There too, COVID-19 deaths have remained low, hovering between one and zero confirmed COVID-19 deaths over the past two weeks. “At the moment there is no increase in the number of people hospitalized,” Bennett said on Sunday.

By comparison, Russia, which has fully vaccinated about 11% of its population, has seen a sharp rise in new COVID-19 related deaths. There were a weekly average of 575 daily new confirmed COVID-19 deaths on June 28, up from about 370 the month before.

Here are Russian, Israeli, and UK deaths on a graph: 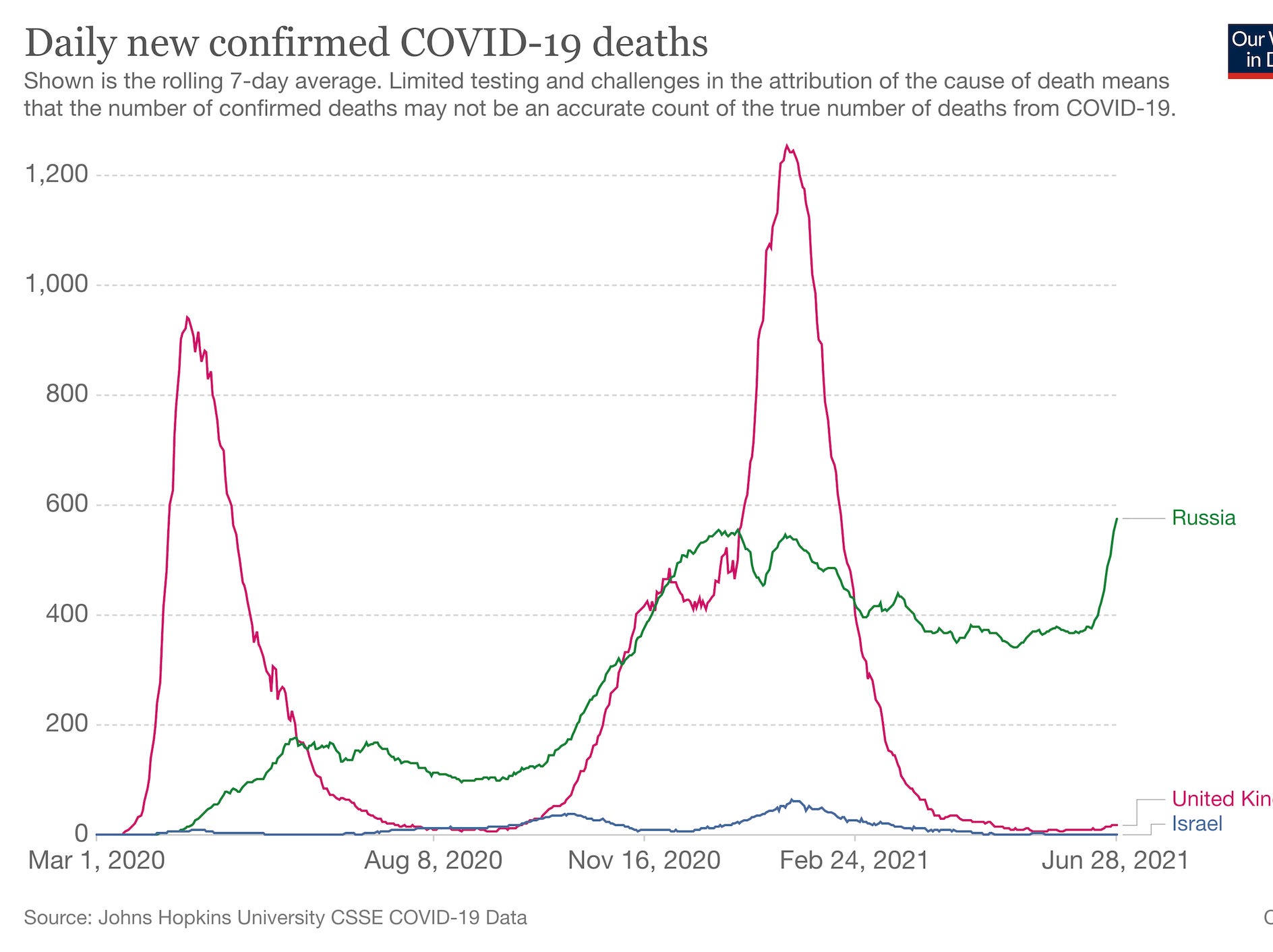 Daily new confirmed COVID-19 deaths in Russia, Israel and the UK as of June 28.

Our World in Data

No return to lockdown

In spite of the rise in cases, the UK is still on track to lift its remaining lockdown measures by July 19, Prime Minister Boris Johnson said on Monday.

Israel has reinstated indoor masking. But more stringent measures such as lockdowns are not on the cards.

“Our strategy is the maximum protection of Israeli citizens with the minimum violation of routine,” Bennet said.

Source: Delta cases are spiking in highly-vaccinated countries, but with fewer deaths and milder government responses

Joe Manchin says he’s ’agreed’ on a Democratic-only reconciliation bill, but not how big it will be