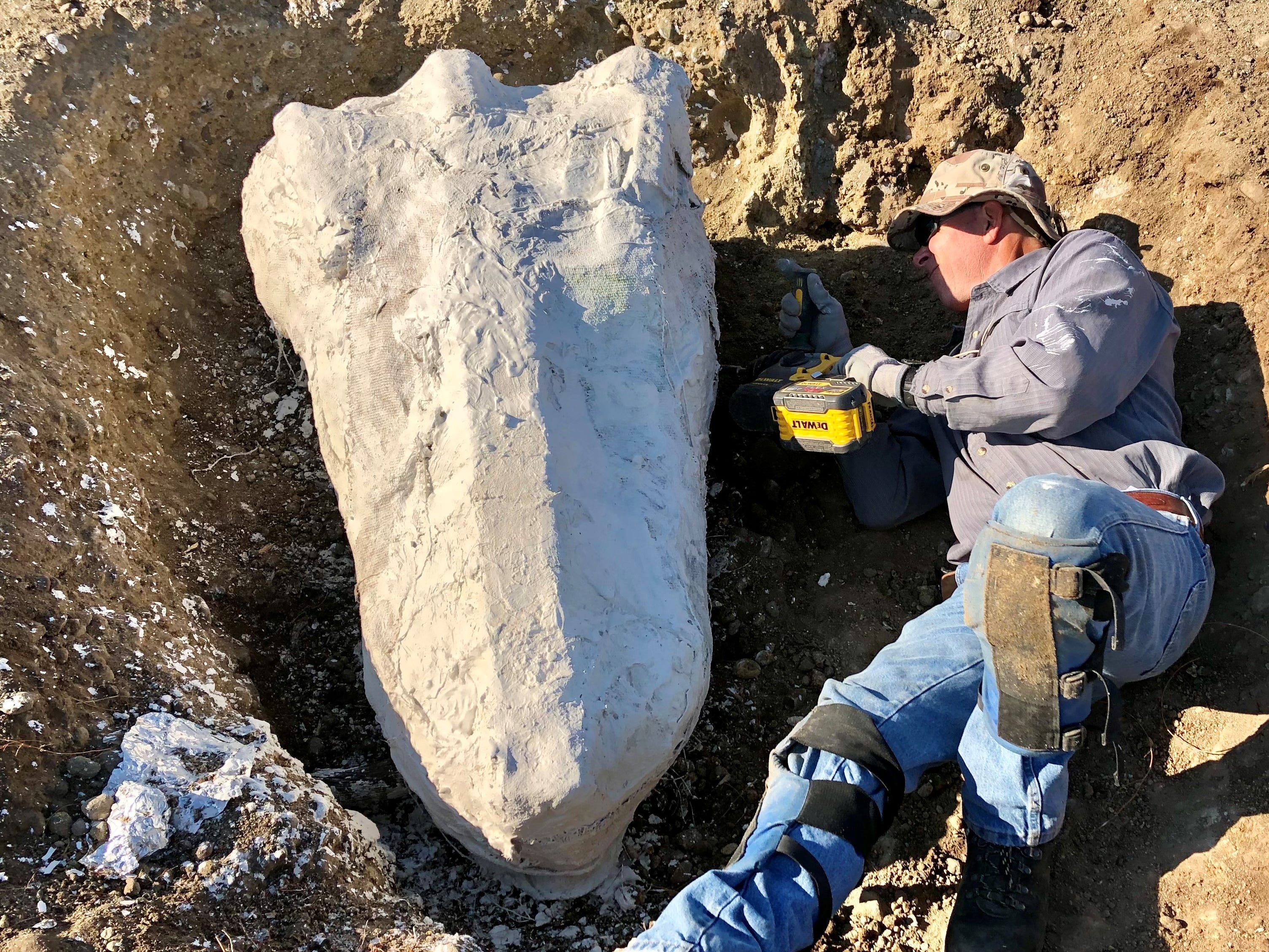 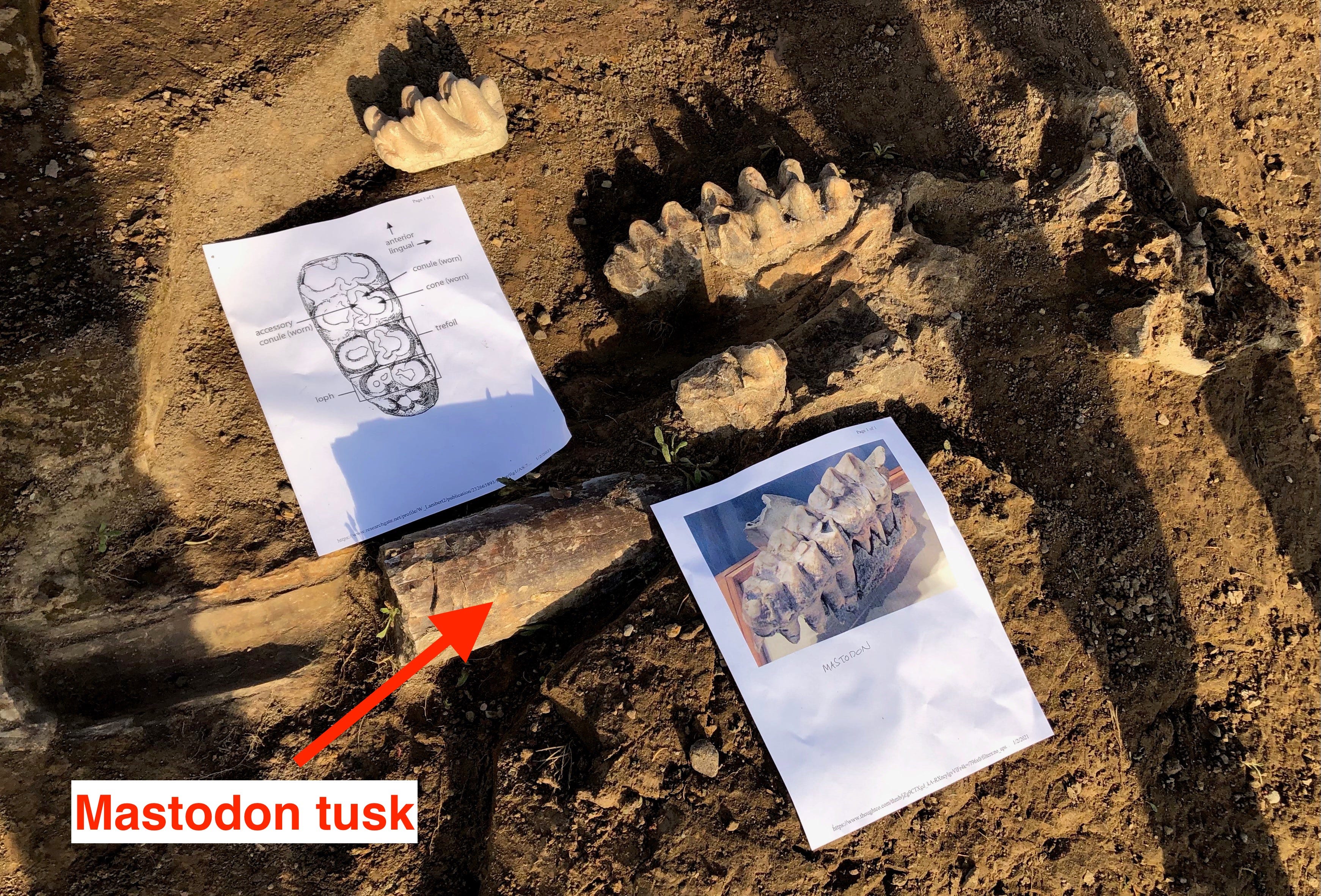 A fossilized mastodon skull and tusk discovered in an area of California east of Oakland.

A ranger patrolling a watershed area east of Oakland, California discovered a trove of hundreds of fossils last summer from nearly a dozen ancient species. The site contains hundreds of petrified trees as well.
It's one of the largest fossil finds in California history, and new fossils are still being unearthed there almost every day.
The discovery include fossils from prehistoric elephants with four tusks, mammoth-like mastodons, tortoises, and camels. The findings have so far all been between 5 and 10 million years old.
The trove's precise location remains a secret to protect the fossils and prevent looting.
The photos below show some of the findings so far.
See more stories on Insider's business page.

Ranger Greg Francek was patrolling land in northern California last summer when he spotted a weird looking rock. “I was curious and had a closer look,” Francek told Insider. 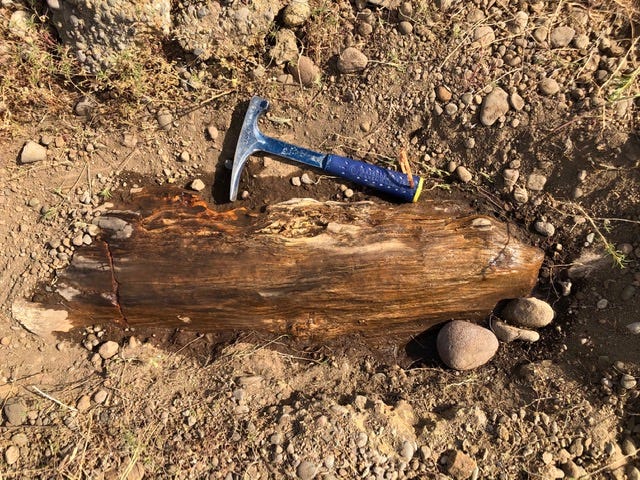 The rock wasn’t a rock at all, but a petrified tree that was millions of years old.

“One end of the tree was partially exposed, and — to my surprise — I could see the tree rings,” Francek said.

The land Francek was patrolling is east of the San Francisco Bay — he has monitored watershed land for California’s East Bay Municipal Utility District (EBMUD) as a naturalist for more than a decade. Francek knew he’d come across something special, so he called paleontologist Russell Shapiro at California State University, Chico.

It wasn’t the first time Shapiro had been asked to look at potential fossils. “We get that call a lot,” he told Insider. But when Francek took Shapiro to see the ancient tree, they discovered a stunning trove of animal fossils. 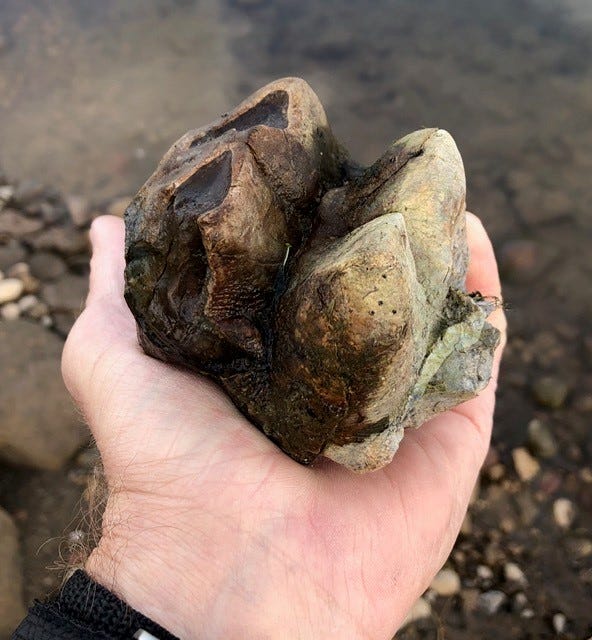 A photo of a mastodon tooth discovered in an area of California east of Oakland.

“The very first day, I could look on the ground and go, ‘Well, that’s an elephant. That’s a rhinoceros. That’s a tortoise. That’s a camel,'” Shapiro said. “We found all this just by tripping over it.”

Shapiro knew it was an unprecedented discovery: Francek, it turns out, had stumbled across one of the largest fossil finds ever found in California.

“You kind of look around at the landscape and just think, ‘Oh, my god, there’s gonna be so much stuff here,'” Shapiro said.

In the 10 months since that first discovery, the duo has helped to unearth several hundred fossil specimens from nearly a dozen species. All are between 5 and 10 million years old. 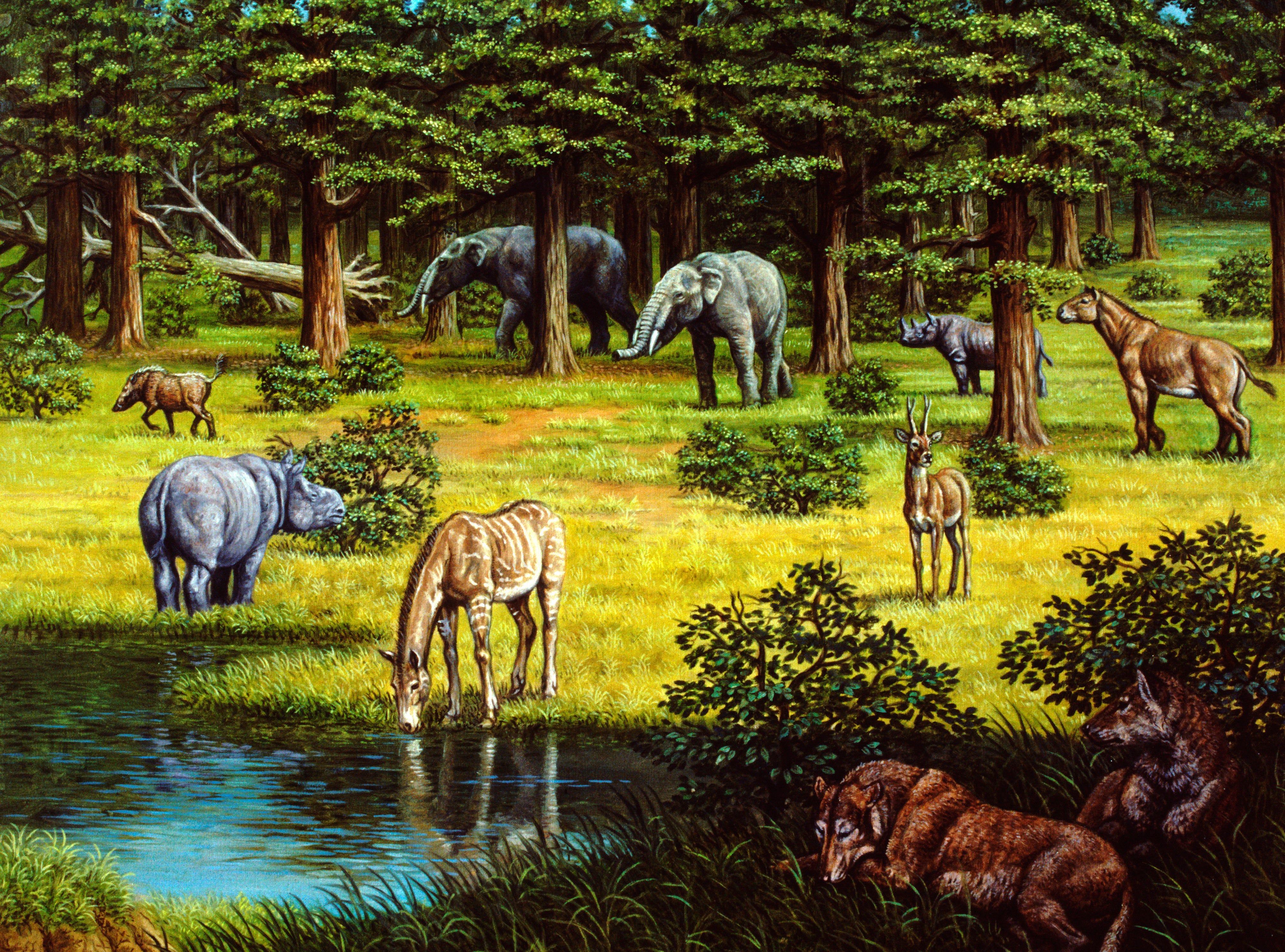 Ancient wildlife that lived during the Miocene epoch, between 23 million and 5.3 million years ago.

Now, a team from EBMUD and CSU, Chico are steadily excavating the site. The fossils they’ve found offer a glimpse into an era of history known as the Miocene epoch, which occurred between 5 and 23.5 million years ago.

California looked quite different during the Miocene — there were no Sierra Nevada mountains, according to Shapiro, and dry grasslands were peppered with volcanoes. Still, the creatures that inhabited the land bore some resemblance to animals alive today.

Francek has discovered fossils of animals like rhinos, tortoises, and tapirs, which still exist, as well as extinct species like mastodons – shaggy, woolly mammoth-like beasts with tusks. 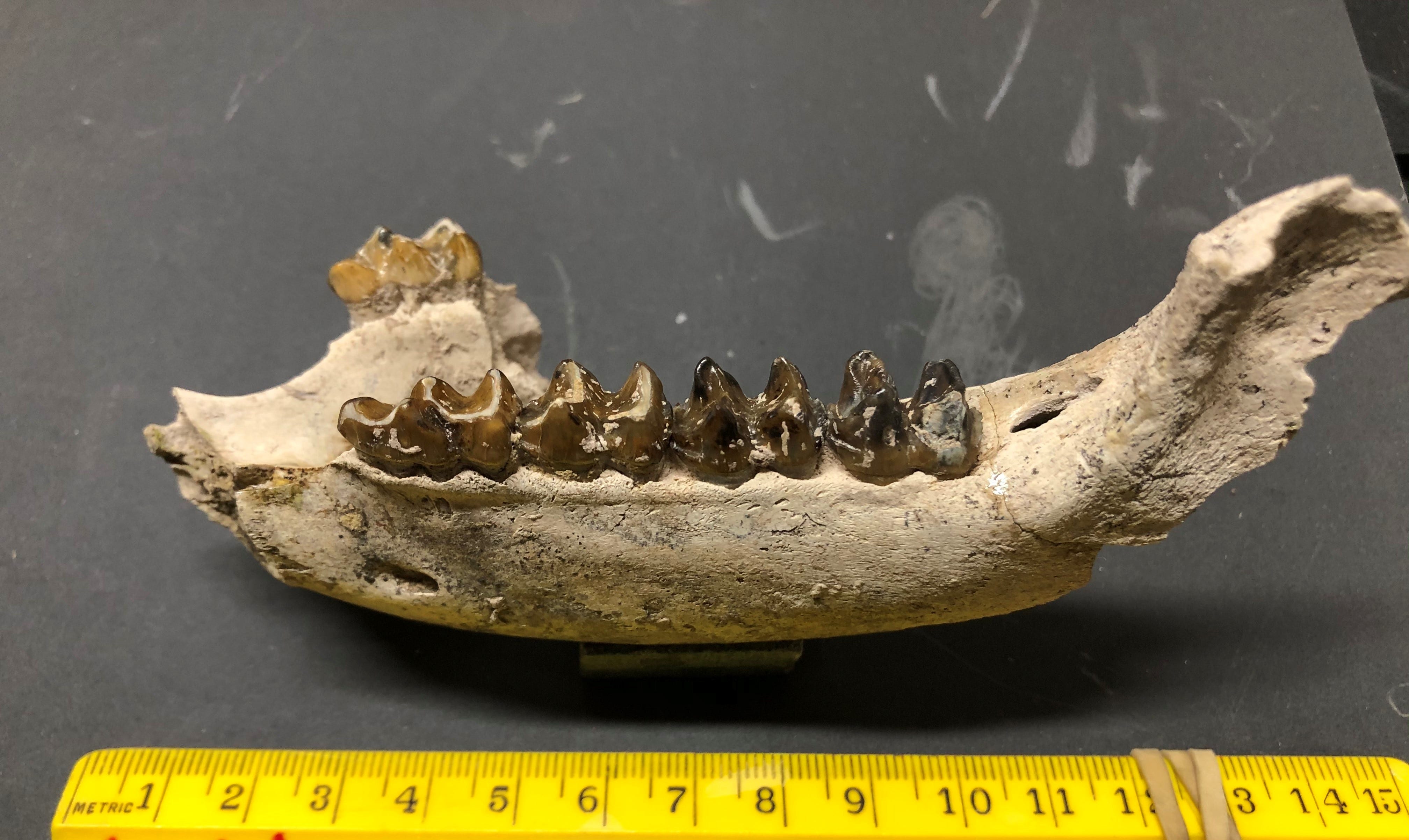 A tapir jawbone discovered in an area of northern California east of Oakland.

Shapiro recalled excavating a particular tapir jaw (pictured above) — he said he thinks tapirs are some of the cutest animals “because they look like a pig, but they have a nose like an elephant.”

Francek said it’s tough to pick a favorite fossil from the site, especially because he continues to find more whenever he visits. 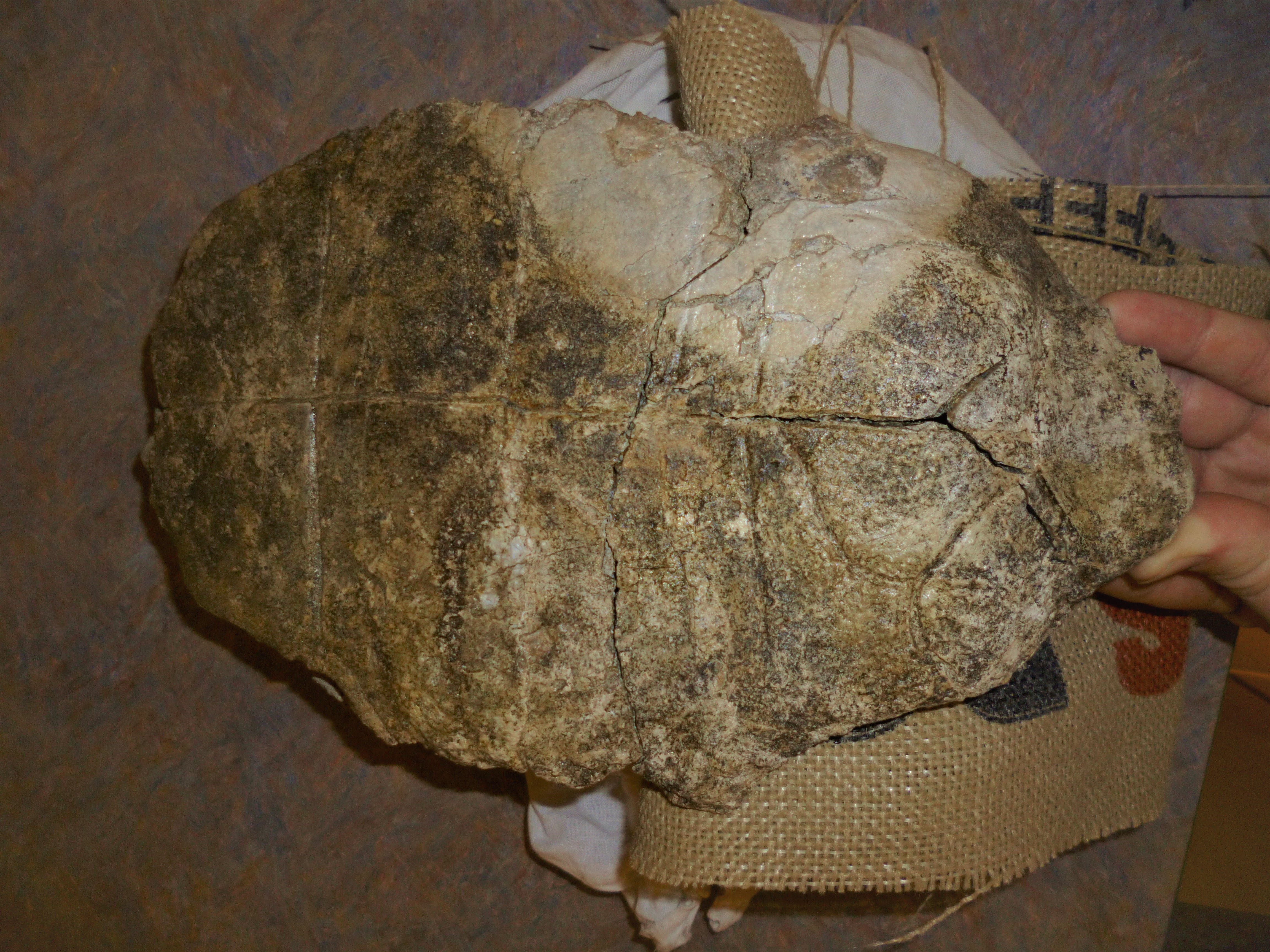 A shell from an ancient tortoise, discovered in an area of California east of Oakland.

“The giant camels are so cool. I like horses. And I like to think about the tortoises walking around the landscape like little armored tanks,” he said.

“I guess the creature that has my imagination working overtime is the gomphothere,” Francek added, “a four-tusked ancestor to the modern elephant.” 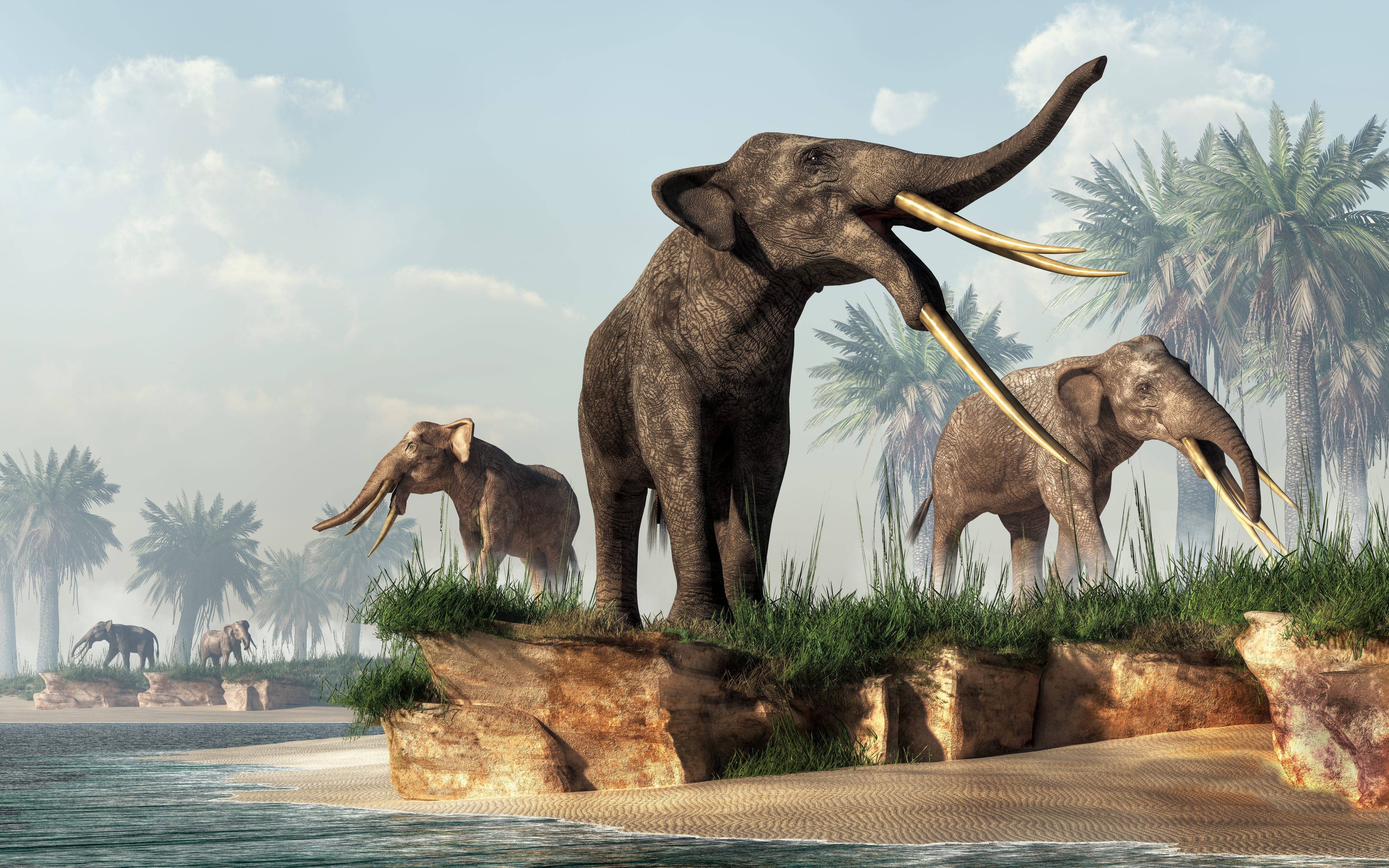 An artist's illustration of gomphotheres, early elephants that lived in North America between 12 million and 1.6 million years ago.

Gomphotheres were widespread in North America during the Miocene. They had tusks protruding from above and below their mouths.

Francek has found fossils from numerous gomphotheres, including an enormous, complete lower jaw and tusks. 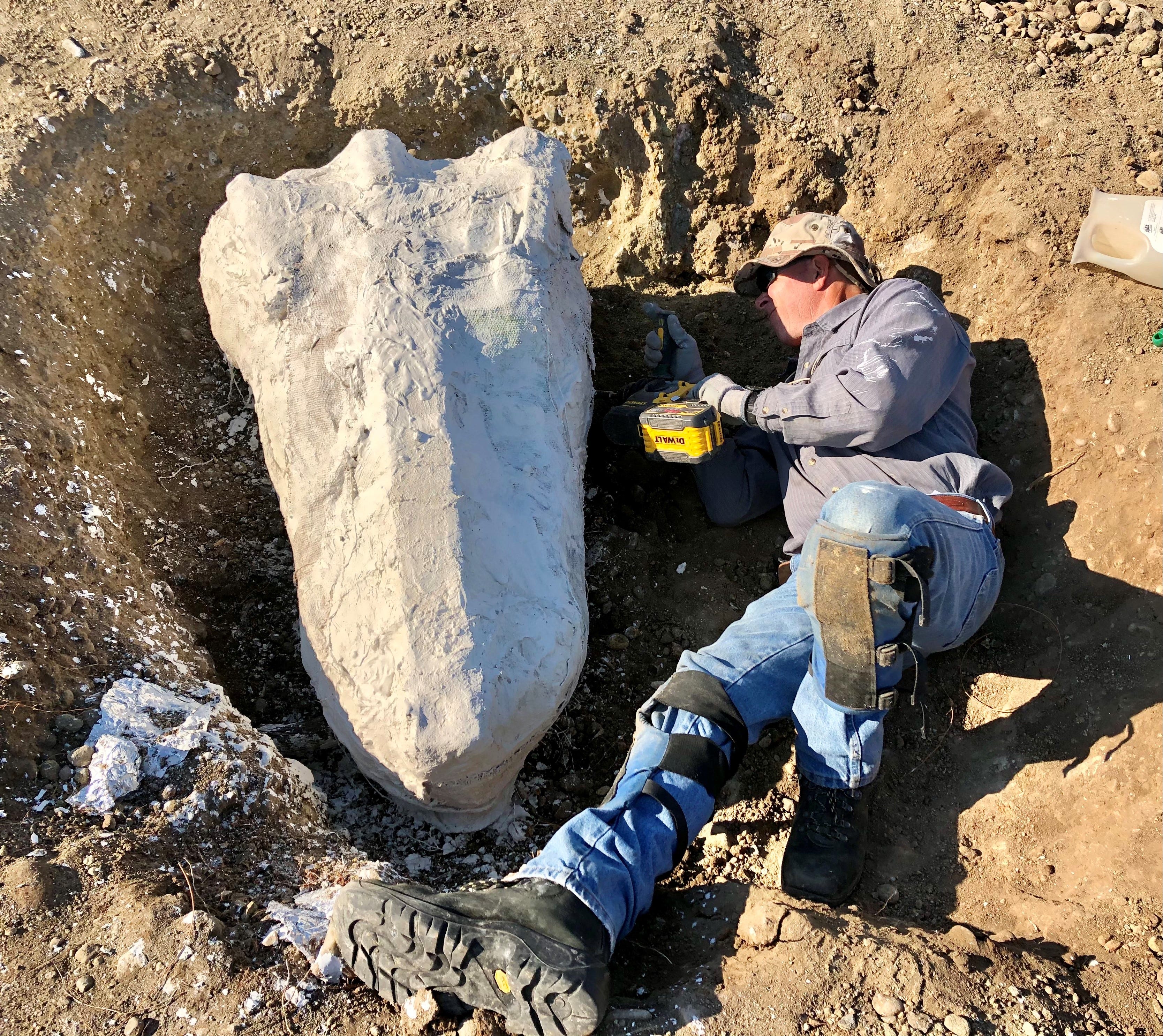 That jaw, he said, “required 124 hours of excavation with hammer and chisel, and a tractor to lift it out of the ground.”

A skeleton of a bone-crushing dog, Epicyon haydeni, in the Los Angeles Natural History Museum.

In addition to fossils of weasel and fox relatives, they found evidence of bone-crushing dogs — prehistoric dog-like creatures that split off from the species that eventually became our pets.

These ancient dogs had strong jaws, Shapiro said: “They evolved the ability to chomp bone.”

He thinks these dogs were the dominant carnivores in the area millions of years ago, before they went extinct at the end of the Miocene.

The hundreds of fossilized trees found at the site so far can help scientists understand what happened to California’s climate at the end of the Miocene. 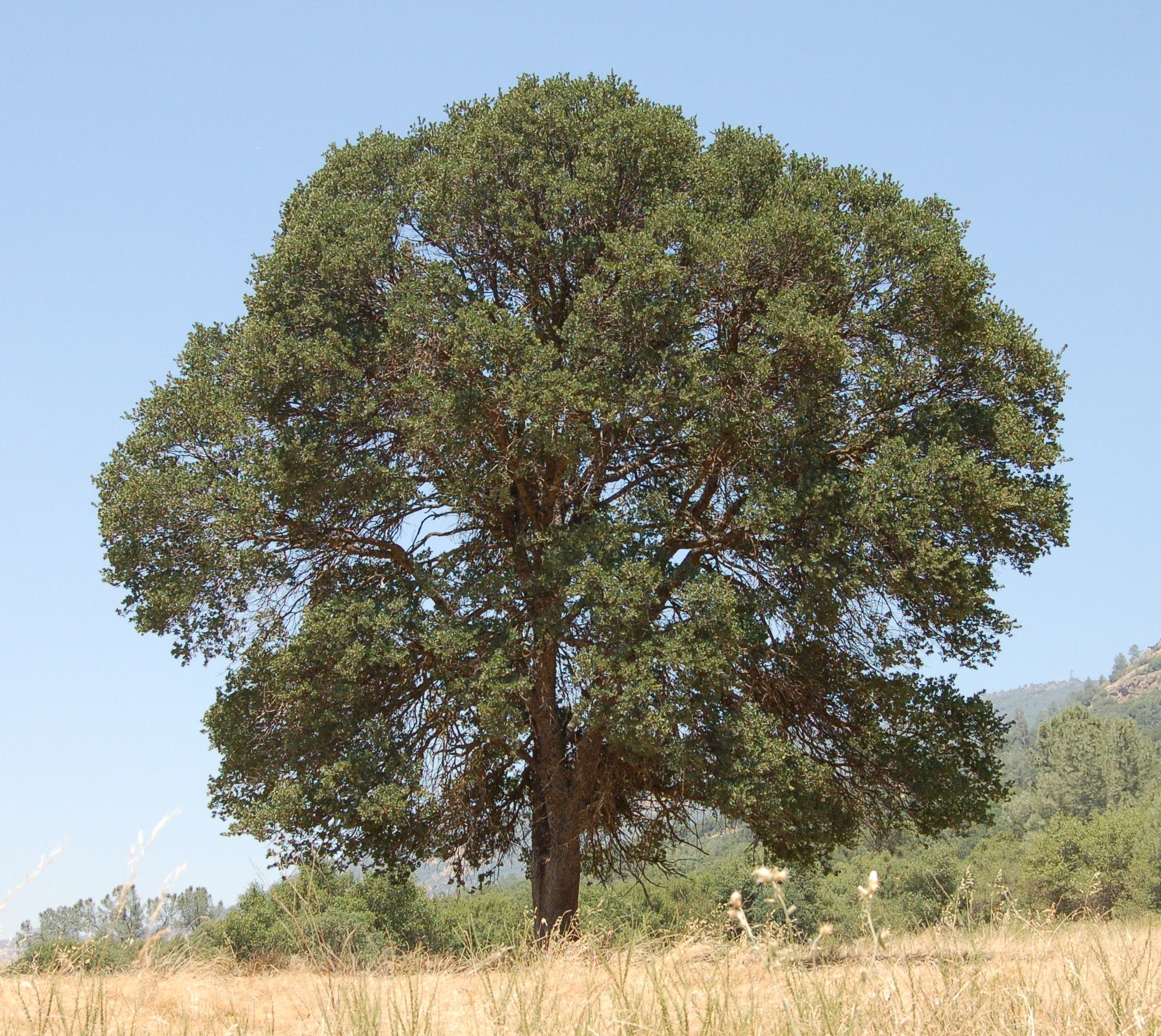 A large Blue Oak in a pasture in Mariposa County, California.

During those years, the Earth was starting to get colder, paving way for the first global ice age 2.4 million years ago.

“We can really tell that the temperatures were starting to drop quickly,” Shapiro said. “Right before this period, you find more tropical plants in California and elsewhere. And then right around this time, you’re seeing the spread of oaks and other plants like redwood trees that really prefer a cooler climate.”

Shapiro and Francek think the trove has more to offer. Francek said he’s been back to the site almost every day since last summer looking for new finds. 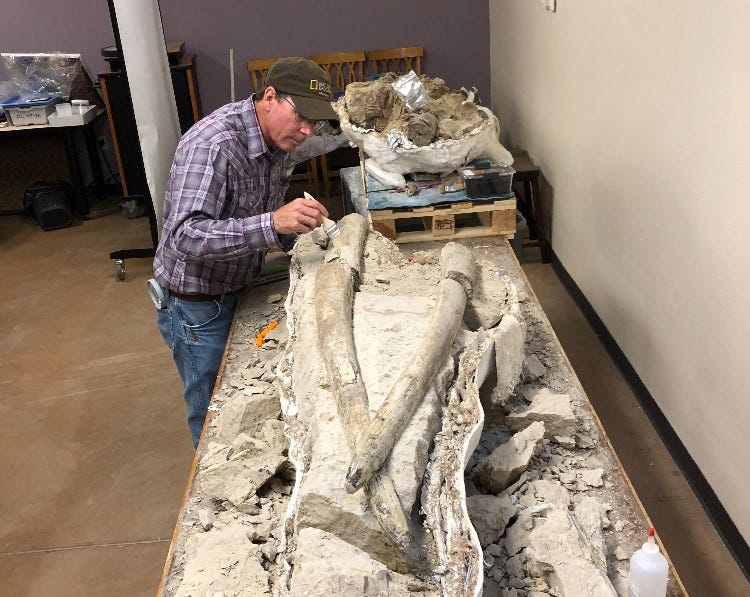 When he discovers something new, Francek takes photos, documents the location, contacts Shapiro, and starts trying to figure out what the critter might be. Recently, he uncovered a mastodon skull, complete with its tusks, fossilized in a rock.

“Every time he goes out, he finds something new, Shapiro said. “I’m getting used to him texting me photos almost every day.”

Once fully excavated, the fossils get taken to a lab in Chico. Shapiro said the team has finally secured a lab large enough to properly study all the findings. They’re working to count them and date the fossils more precisely. 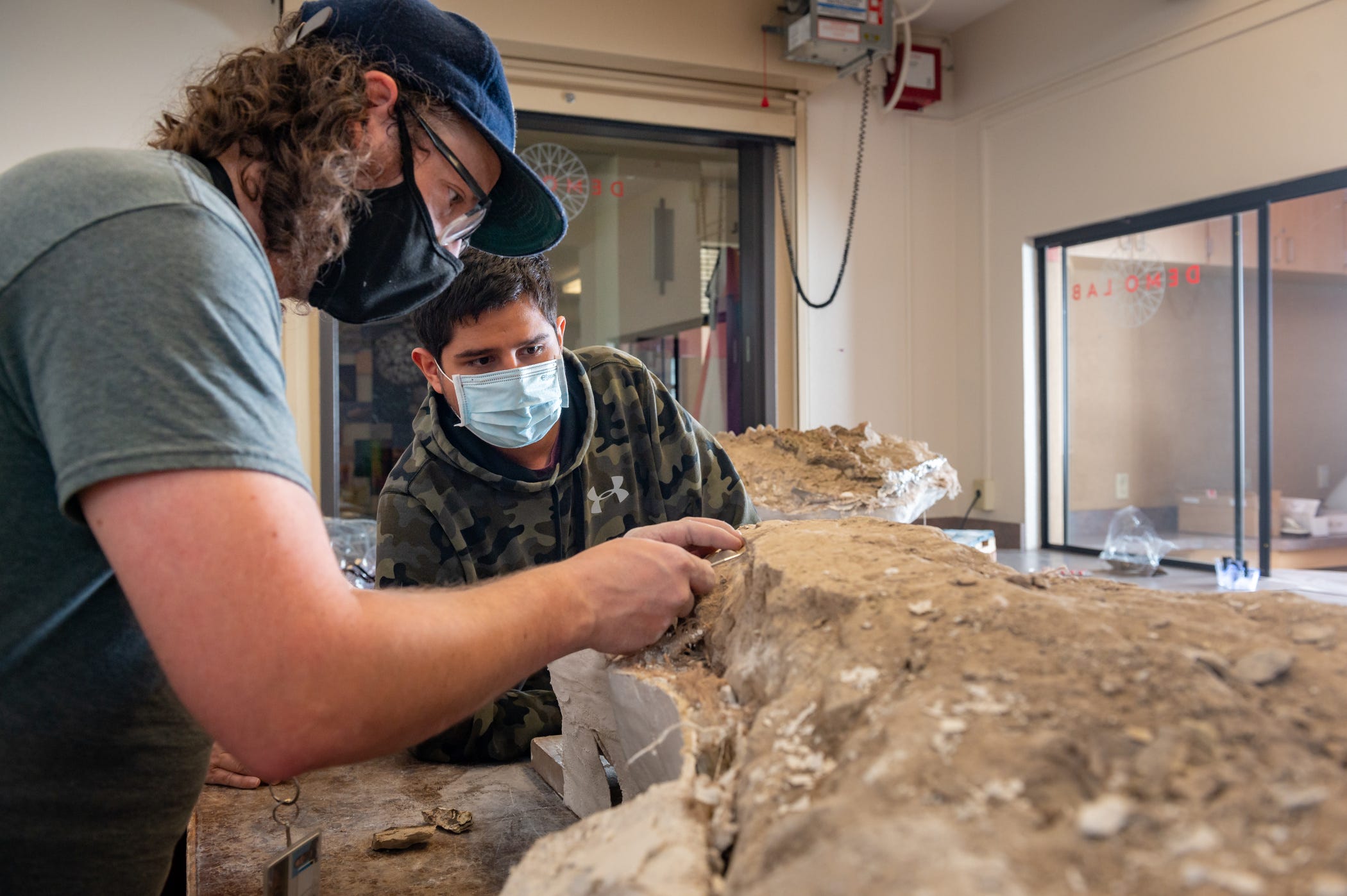 Two scientists chisel away at mastodon tusks discovered in an area of California east of Oakland.

“All of these bones come from pretty much one geologic layer,” Shapiro said.

That suggests the ancient creatures were fossilized around the same time.

The trove’s precise location remains a secret, however, in order to keep the area safe from vandals and looters. 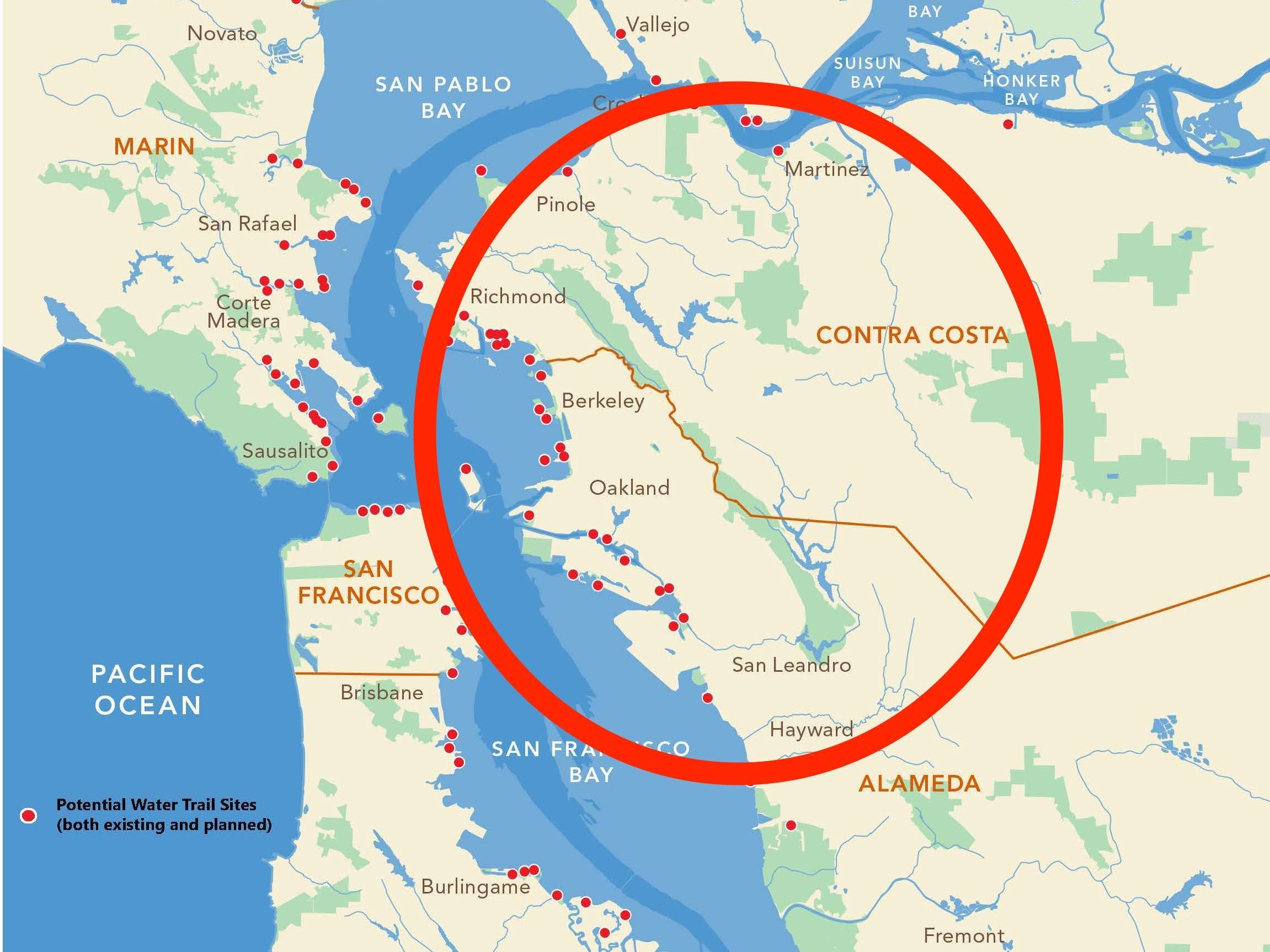 A rough outline of the East Bay Municipal Utility District's area of coverage.

Since excavations are ongoing, EBMUD does not allow the public to visit the site. Instead, it has set up an online tour of the findings for users to explore.

The secrecy is warranted: After Francek’s initial discovery, Shapiro recalled the ranger’s excitement at the prospect of showing him that first petrified tree. But when they arrived part of it was missing. “It was like a punch to the gut to find that some of the petrified tree remains had been stolen and vandalized,” Francek said.

After that, the team quickly secured the remaining specimens and installed an around-the-clock patrol of the site.

“We intentionally waited nearly a year to announce the discovery so that we could establish solid security measures,” Francek added.

Source: One of the biggest fossil finds in California history has revealed ancient elephants, camels, and bone-crushing dogs

From WallStreetBets to TikTok, finance is still all about ’bro culture’ - but a FinTok ’financial feminist’ and her over 150,000 followers are trying to change that