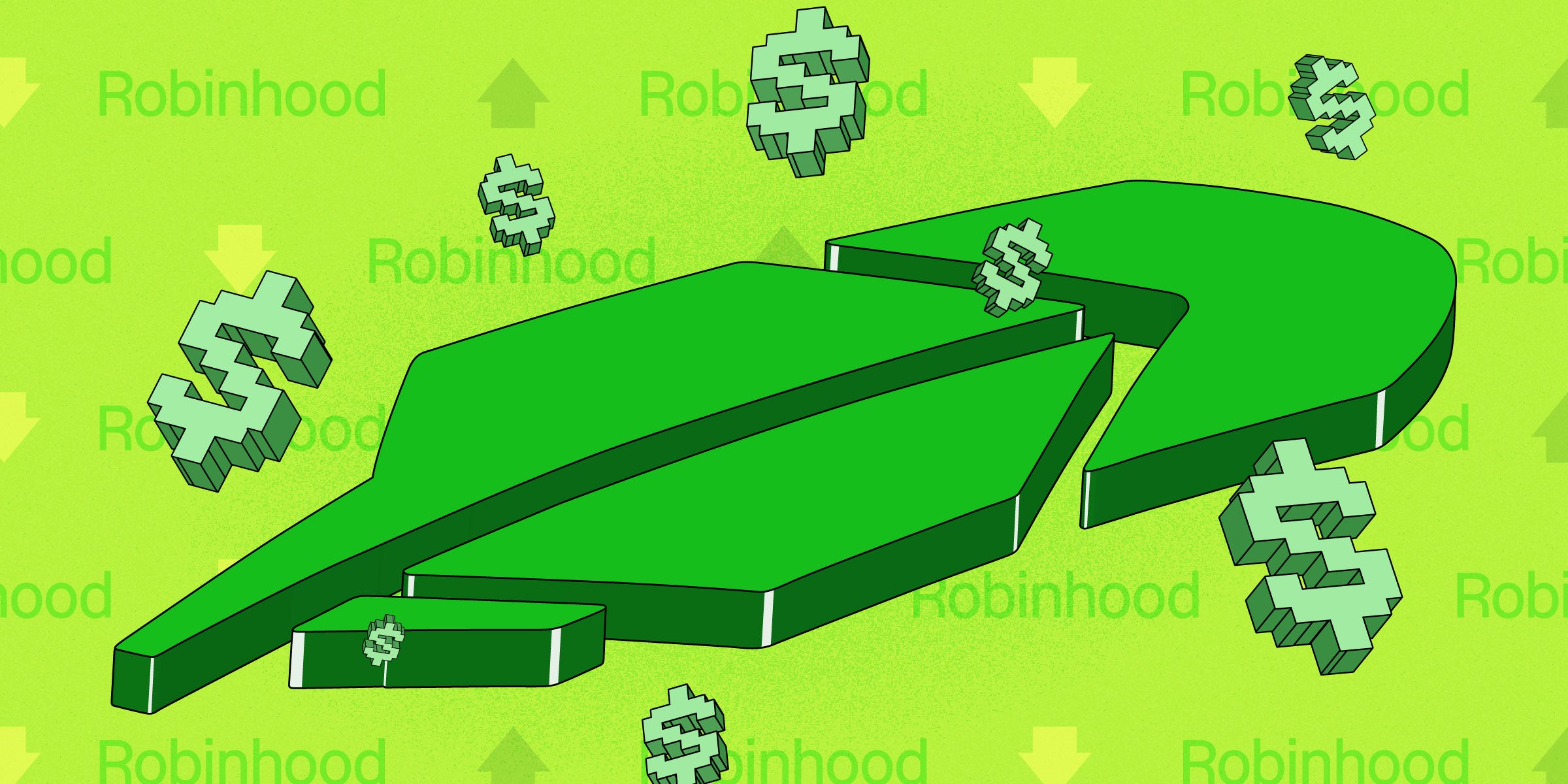 I opened brokerage accounts with three trading apps this week and compared the experience of using each.
Robinhood by far has the best looking app. But if you want more resources to help you make investing decisions, use WeBull.
Robinhood launched in 2013 and is now seeking to go public. WeBull and Public both launched in 2017.
See more stories on Insider's business page.

Robinhood launched in 2013 and quickly gripped new and young investors wanting to try their hands at retail trading.

The trading app, which is seeking to go public with a valuation as high as $30 billion, had about 13 million users at the end of 2020.

But the app came under intense scrutiny from lawmakers, regulators, and customers after it halted trading of GameStop as retail traders drove up the stock price to all-time highs in January.

Some have said the app makes investing too much like a game, as others complained of market manipulation amid the GameStop frenzy.

The situation has allowed competitors to muscle in.

WeBull, the Chinese-owned brokerage that launched in 2017, said it saw a 16-fold jump in new account signups following the Robinhood backlash, Bloomberg reported at the time. Meanwhile, Public, which also launched in 2017, has doubled in size year-to-date with more than 1 million users.

These trading apps are all competing for attention from Millennial and Gen Z investors alongside more established brokerages, like TD Ameritrade, Fidelity, and others.

For this story, I downloaded each of the three apps to compare the user interface, the variety of features, security, and the educational resources, to see which one came out on top.

The bottom line? Robinhood was hands down the most enjoyable to use and interact with, but WeBull came out on top with readily available data and resources to help me improve my investing strategies.

My view as a first-time retail investor

I will start by saying I've never done this before. I started my professional journalism career at Bloomberg and am now the Millennial Investing reporter on the markets team at Insider. Those roles come with strict rules on what I can and can't do in terms of investing.

For example, I write a lot about meme stocks like GameStop and AMC. If I were to invest in one, that would be a conflict of interest and would land me in hot water with my employer. Besides contributing to a 401(k), I've stayed away from any other investing.

To open accounts with each of the apps, I had to answer a lengthy list of questions, from my investment experience to a lot of personal identifying information, and then input my banking information. This experience is standard across all services.

Though I did not claim the offer, all of the apps I tested award users one free stock as a perk of signing up.

Also, importantly, all of these services are commission-free. This is the case for both stocks and crypto on Robinhood and WeBull, while Public does not offer crypto trading at this time. 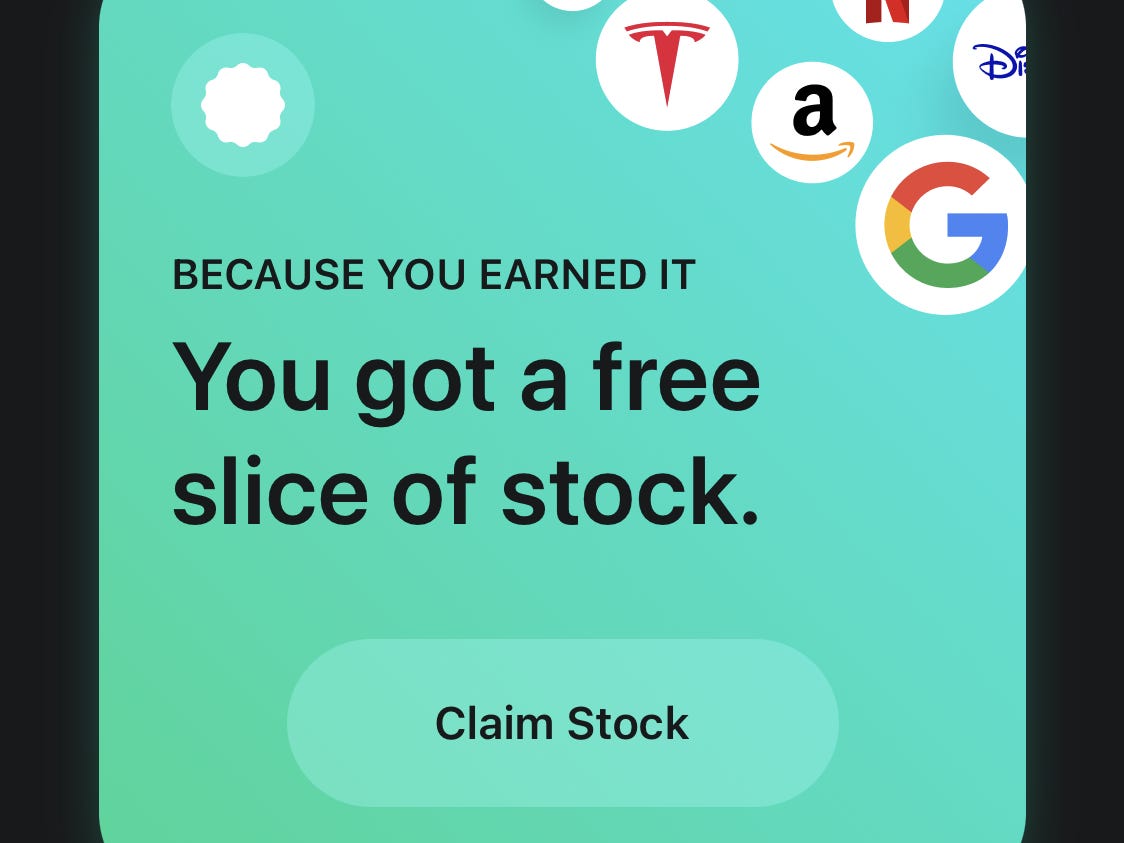 I see why Robinhood has been described as “gamifying” investing. The app is well-designed and exciting.

My retail investing journey began with Robinhood. I got the go-ahead to transfer exactly $1 to my new brokerage account to invest in an exchange-traded fund. I chose the Vanguard S&P 500 ETF, which trades under the ticker VOO.

With $1 in buying power, I received .002602 shares, the app said. I swiped up to submit the purchase. It said my order was completed and showed me a summary.

When I clicked “Done,” a full-screen graphic appeared saying, “Congrats on making your first trade, Natasha!” 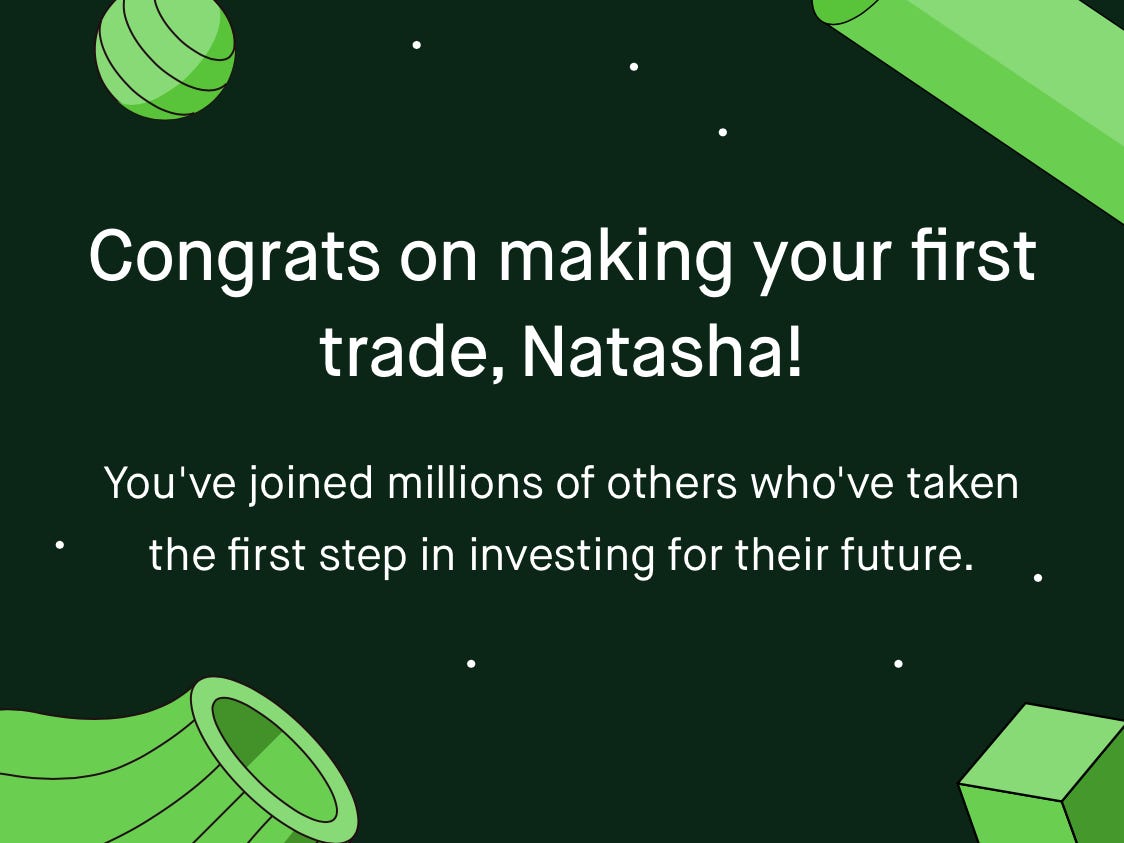 As someone who writes about markets for a living, this was extremely fun. If I'd had more than $1, I would have clicked the shiny green button on the bottom that read, “Continue your journey” to buy more.

I started to understand how young people could become addicted to an investing app.

Public made the buying experience just as easy. Instead of the bright white-and-green color scheme on Robinhood, Public has a sleek black-blue-and-white design.

I easily found the Vanguard ETF, input my $1 of buying power, and clicked “confirm.” No confetti, but it was straightforward and easy. 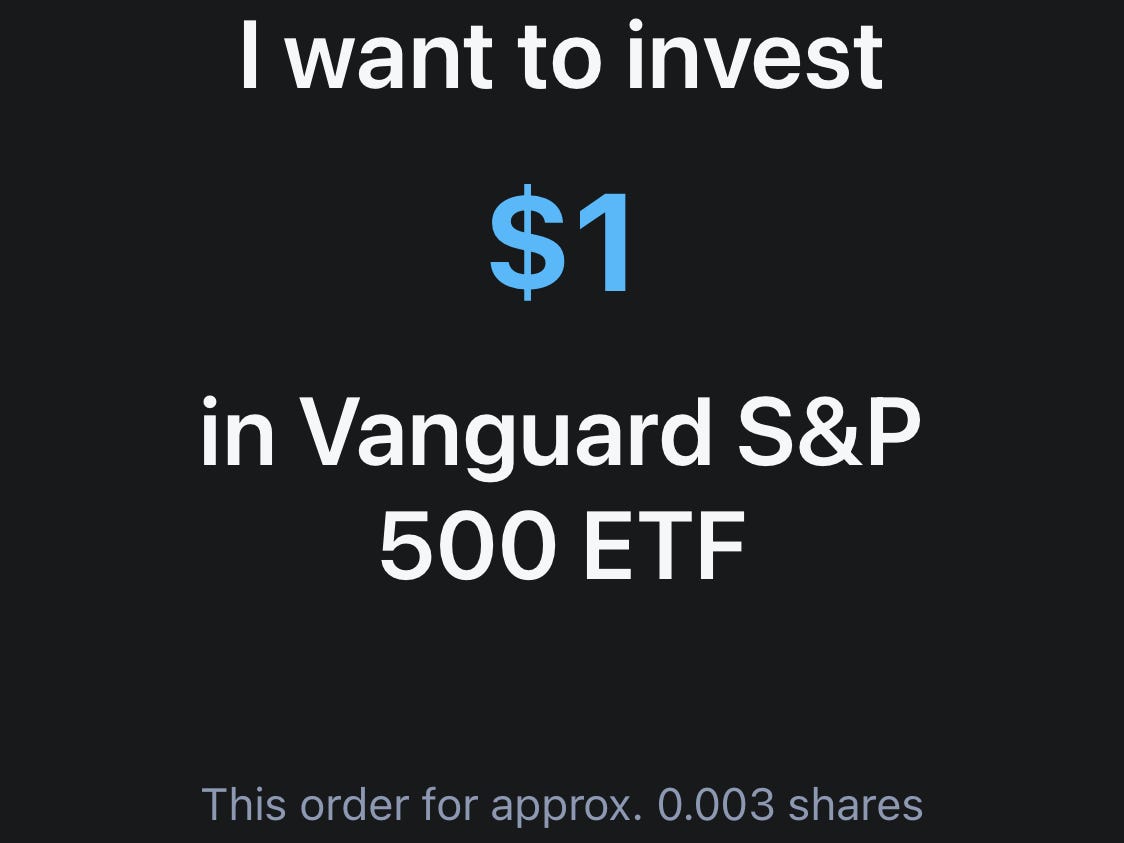 WeBull was more of a challenge. I transferred my $1 from my bank account only to discover the app doesn't offer fractional trading, meaning I had to buy a whole share, which would have cost $386.91 as of 2:45 p.m. on Friday.

The discovery was a let down. I would either have to find an ETF trading at $1, which does not exist, or transfer more money for something more expensive.

I decided on a single share of the Financial Select Sector SPDR ETF, trading under the ticker symbol XLF, for $37.54.

After transferring more funds, I hit the blue “trade” button on the ETF's main page, input the quantity as 1, and hit “confirm.” It brought up a receipt page that read “working” and would allow me to cancel or modify my order in the meantime. Again no fireworks, but a relatively simple process.

If you overlook the lack of fractional trading, which can be a great way for investors to own otherwise prohibitively expensive stocks, WeBull felt like the most serious investing app. Here's why.

First of all, it had the most security features. I opted to set an unlock pattern for each time I open the app. On top of that, when I decide to go into my brokerage account within the app, I have to enter a six-digit pin.

It felt like bank-level security, which is something I found important out of a broker that has all of my personal information and bank account details.

Robinhood and Public have security features, too, just not as many. Robinhood requires my phone passcode each time I open the app. On Public, I opted to turn on the face-ID feature for more security.

Though the deluge of data meant the app wasn't as sleek as Robinhood, it also meant I had more access to important information before investing.

That's not to say Robinhood and Public don't have market data. They do (on Robinhood investors can pay $5 for a subscription to market research and level 2 data), but neither app has near the amount of information WeBull provides up front.

In terms of educating young or new investors, WeBull also wins. The app regularly sent me messages with how-tos on investing and explainers on topics like initial public offerings. 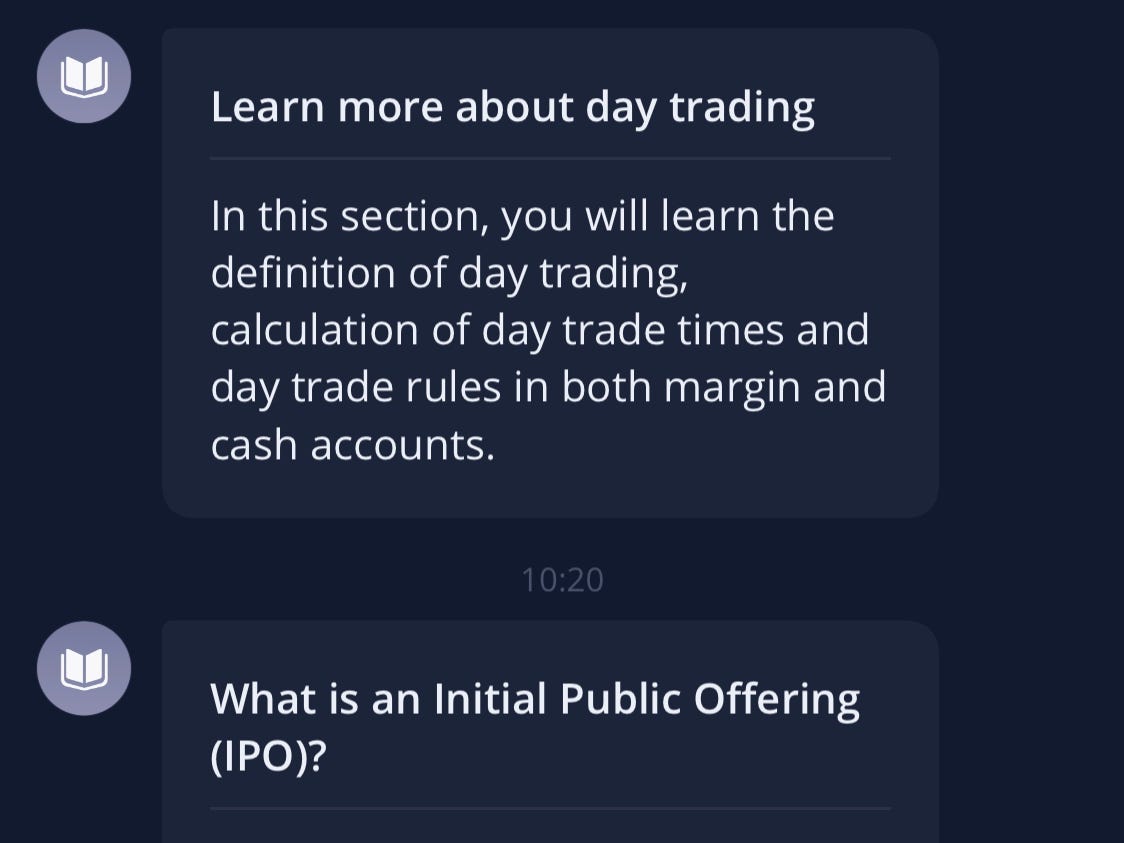 There wasn't much for educational resources within the Robinhood app. Public offered some. All three gave access to relevant news articles.

WeBull also had a social media feature, where users can share their views and investments.

Public, though, has a much more visible social aspect, and markets that as a selling point. Its slogan is “Public makes the stock market social,” and it recently launched a live audio feature, similar to that of the Clubhouse app.

Among the apps, investors have to choose among a sleek and exciting platform with Robinhood, a less sleek yet more informational app in WeBull, or a social-media driven platform in Public.

Overall, my experience would lead me to choose WeBull if I was in the market for a trading and investment platform.

Source: I used Robinhood, WeBull, and Public for the first time. They all have their advantages, but one outshines the competition with its resources for new traders.