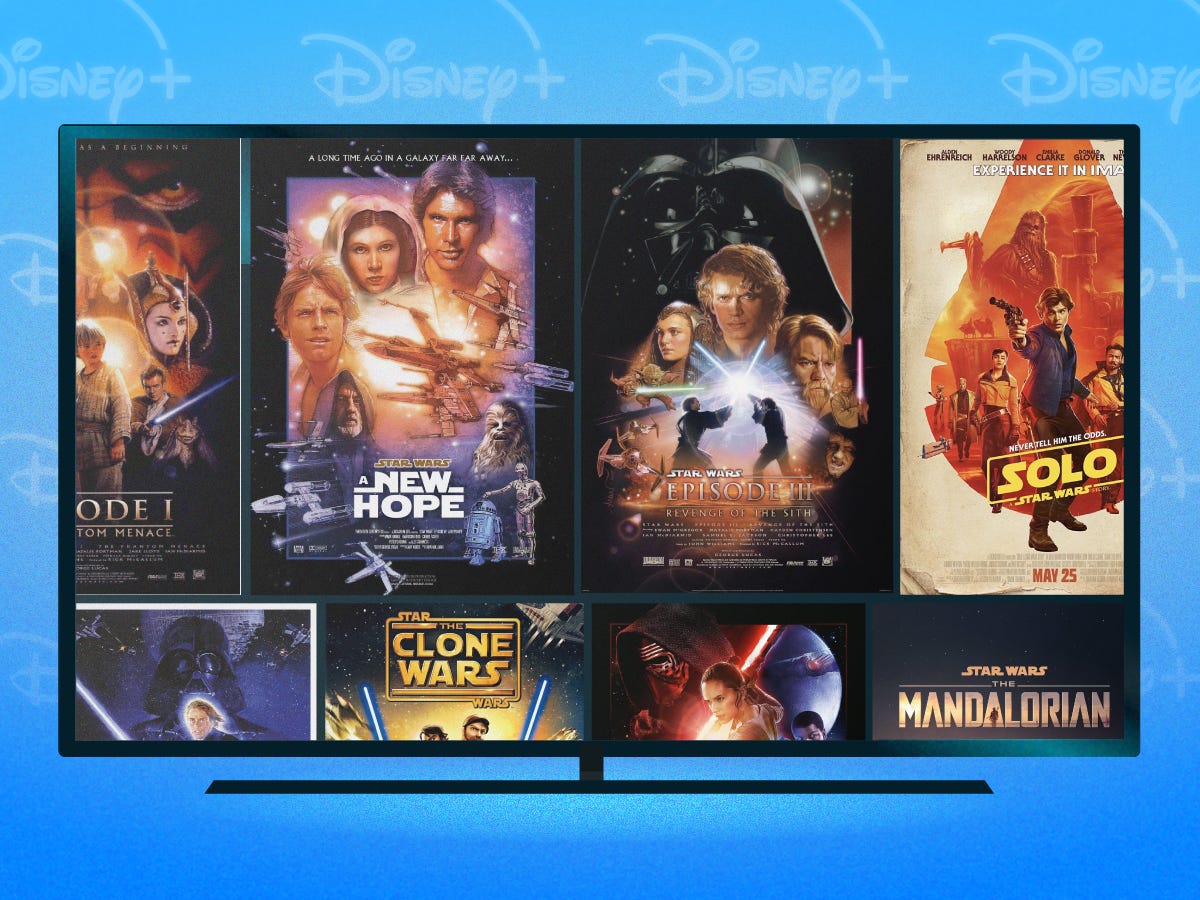 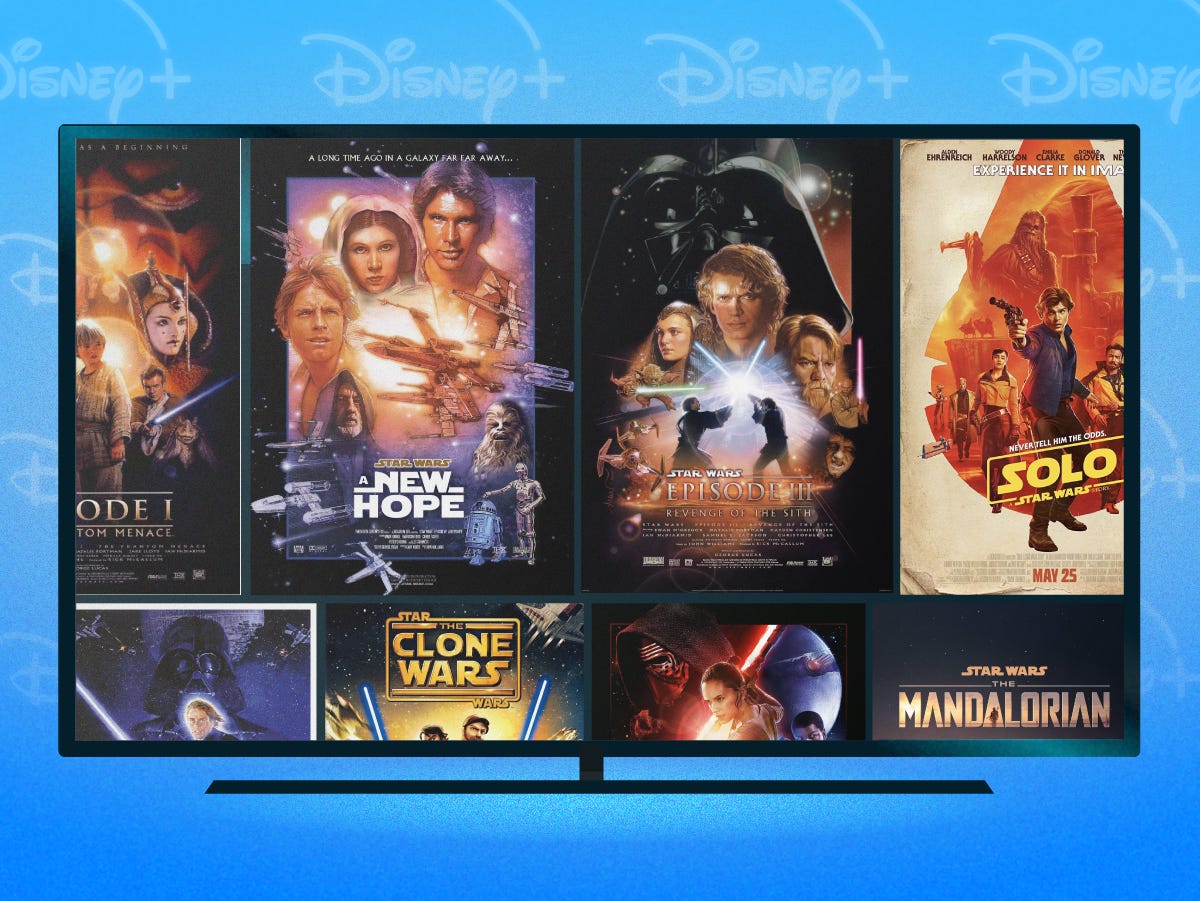 Disney Plus offers every Star Wars movie from the original trilogy through “The Rise of Skywalker.”
The service is also home to exclusive Star Wars shows, like “The Mandalorian” and “The Bad Batch.”
Disney Plus costs $8 a month or $80 a year.
Monthly Subscription Service (small)

The Disney Plus streaming service is home to a large selection of movies and TV shows from all of the studio's major brands, including the Star Wars franchise. You can sign up for $8 a month or $80 a year.

Every Star Wars movie, starting with 1977's “A New Hope” and concluding with 2019's “The Rise of Skywalker,” is available to watch right now on Disney Plus. New original Star Wars shows are also available to stream, and a full slate of movies and series have been revealed for the coming years.

If you're a Star Wars fan looking for your favorite title to watch, we've broken down all the basics you need to know about streaming Star Wars on Disney Plus, including a full rundown of available movies and shows.

What Star Wars movies and shows can I stream on Disney Plus?

Disney Plus features every major Star Wars movie released so far. This includes all of the episodic entries in the franchise, from “A New Hope” through “The Rise of Skywalker.” All of the movies are available in 4K HDR with Dolby Vision and Dolby Atmos on supported devices.

Upcoming series include a live-action show focused on Obi-Wan Kenobi and another focused on Anakin Skywalker's student Ahsoka. Multiple “Star Wars” movies have been announced as well, including one based on the comic book and video game series “Rogue Squadron,” and another created by “Thor: Ragnarok” director Taika Waititi.

Between all of the currently available Star Wars titles and all of the upcoming shows, there is a ton to stream. With that in mind, we've listed every single Star Wars movie and show announced for Disney Plus so far.

Here are all the Star Wars movies and shows on Disney Plus: 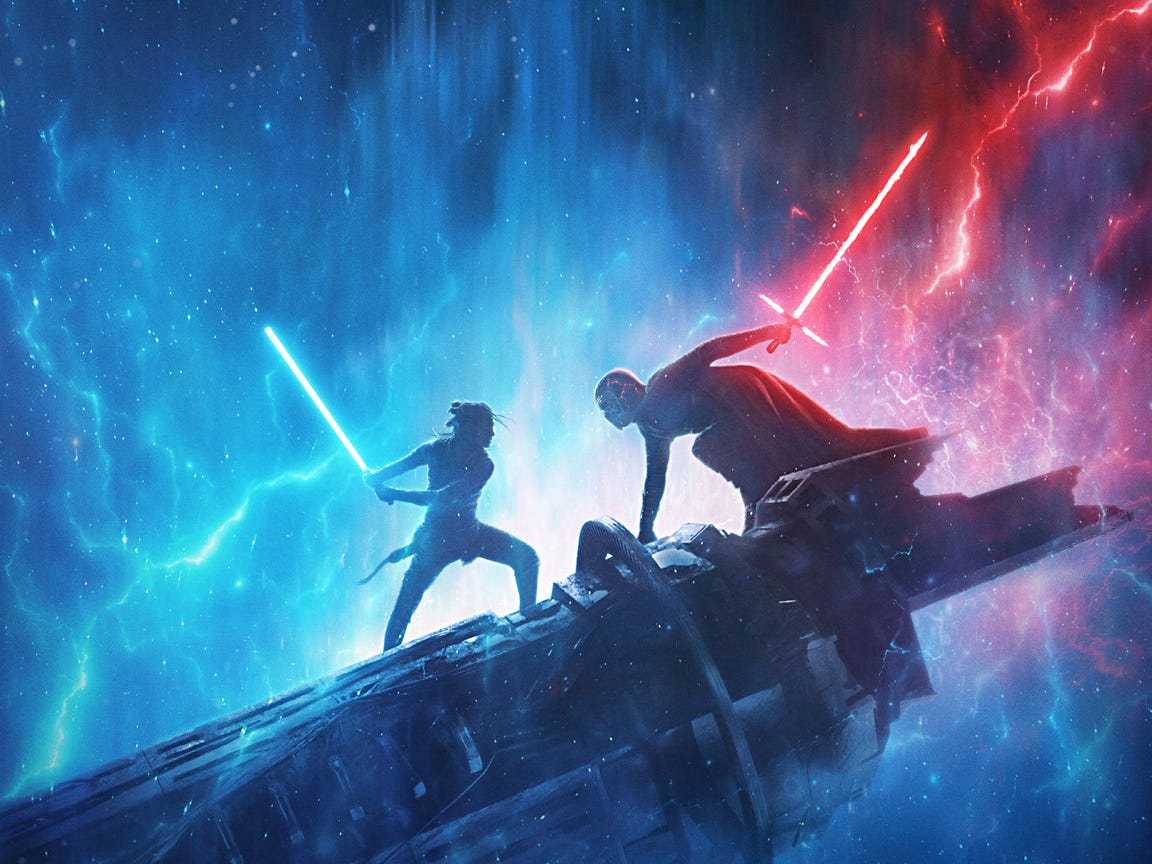 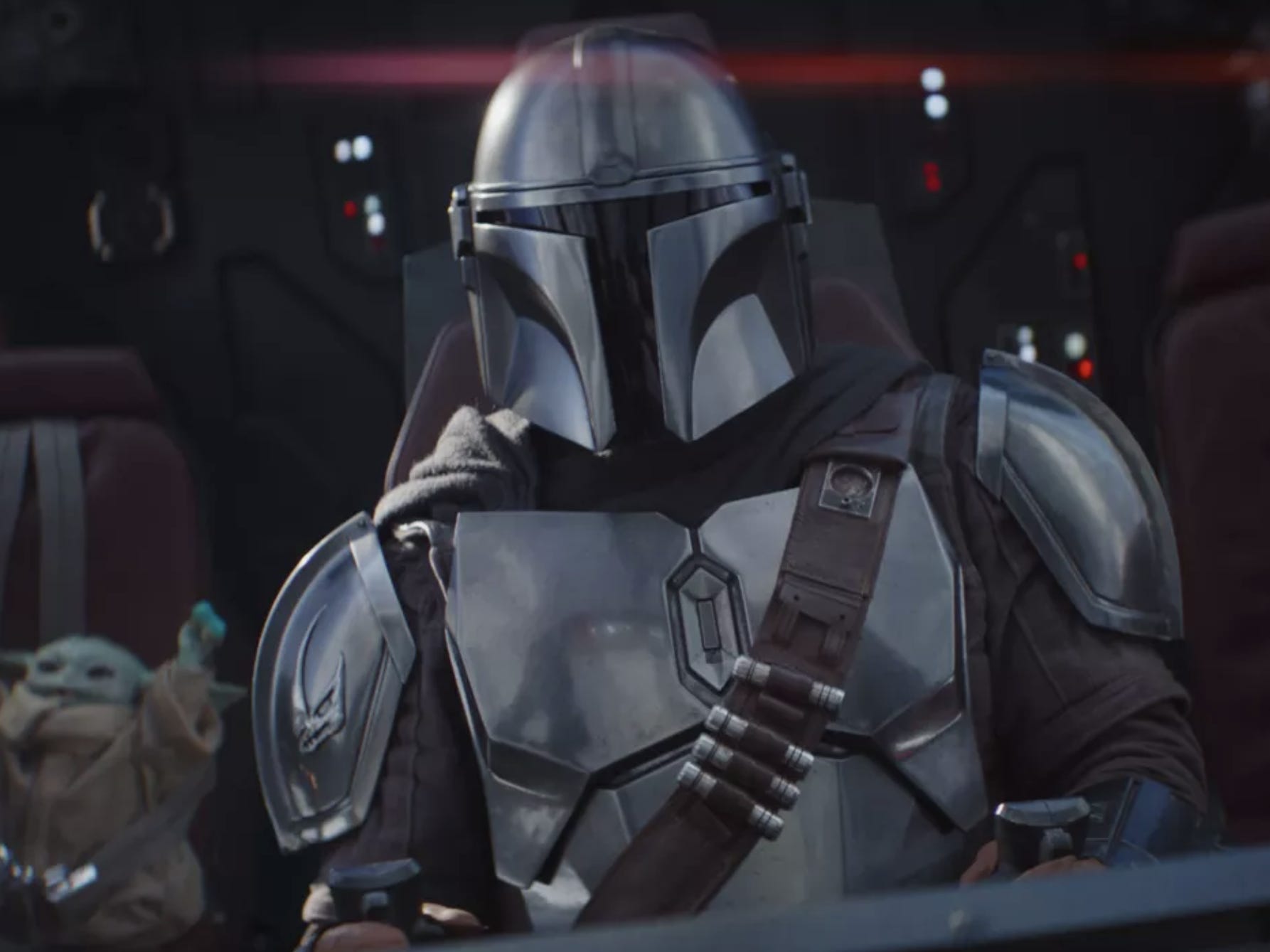 Set five years after the fall of the Empire in the original “Star Wars” trilogy, “The Mandalorian” focuses on a bounty hunter who finds himself on a mission to protect a creature with a powerful connection to the Force.

Two full seasons of “The Mandalorian” are now available to stream. A third season is in development, and the show sparked multiple spin-off series, including “Ahsoka” and “The Book of Boba Fett.”

‘The Bad Batch” is an animated series following a group of elite Republic soldiers in the aftermath of “The Clone Wars.” While the Republic troopers are clones of bounty hunter Jango Fett, each member of the Bad Batch has unique genetic skills that help contribute to the team.

‘The Bad Batch”  premiered with a special 70-minute episode on May 4, Star Wars Day, and continues with new episodes every Friday. 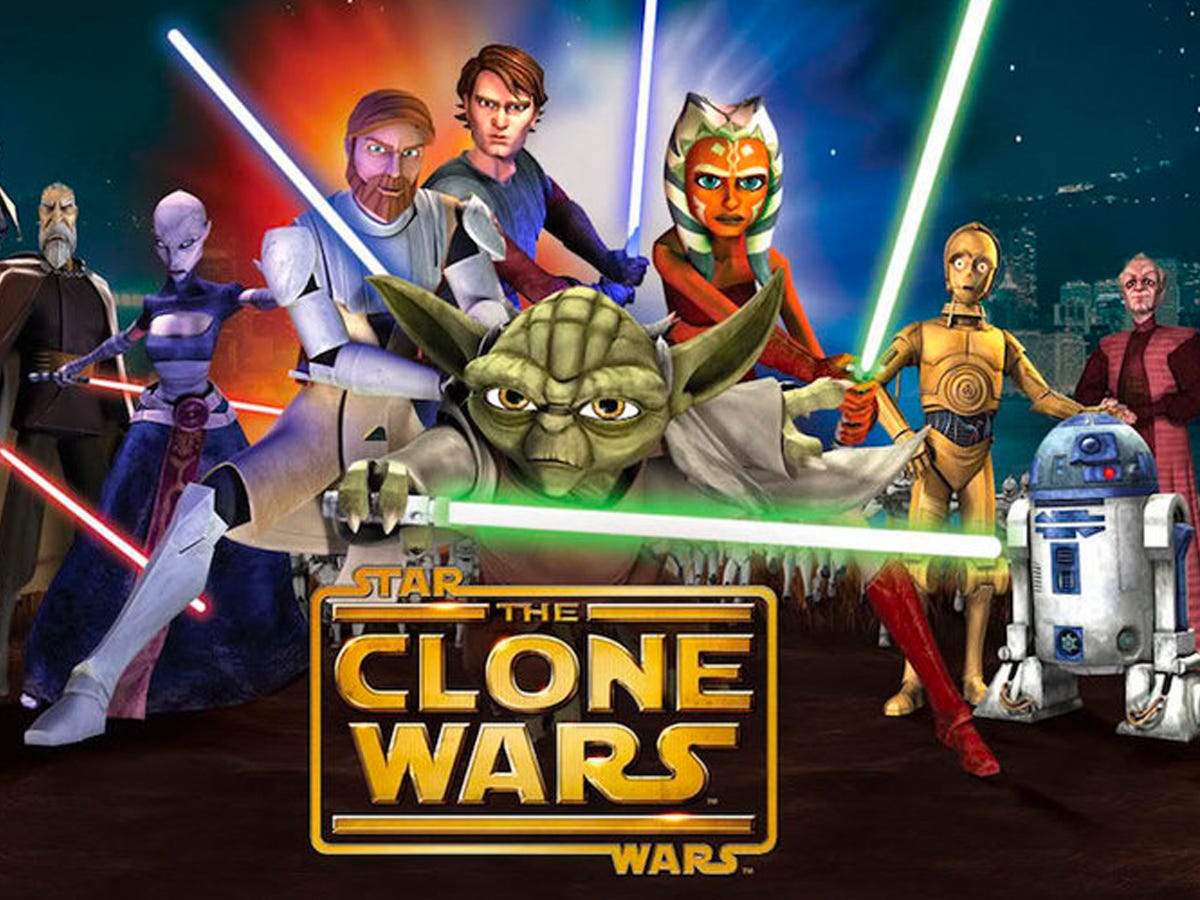 All seven seasons of “Star Wars: The Clone Wars” are now streaming on Disney Plus.

The animated show originally came to an end after its sixth season back in 2014, but Disney revived the series for one final season on Disney Plus.  Season seven consists of 12 episodes. 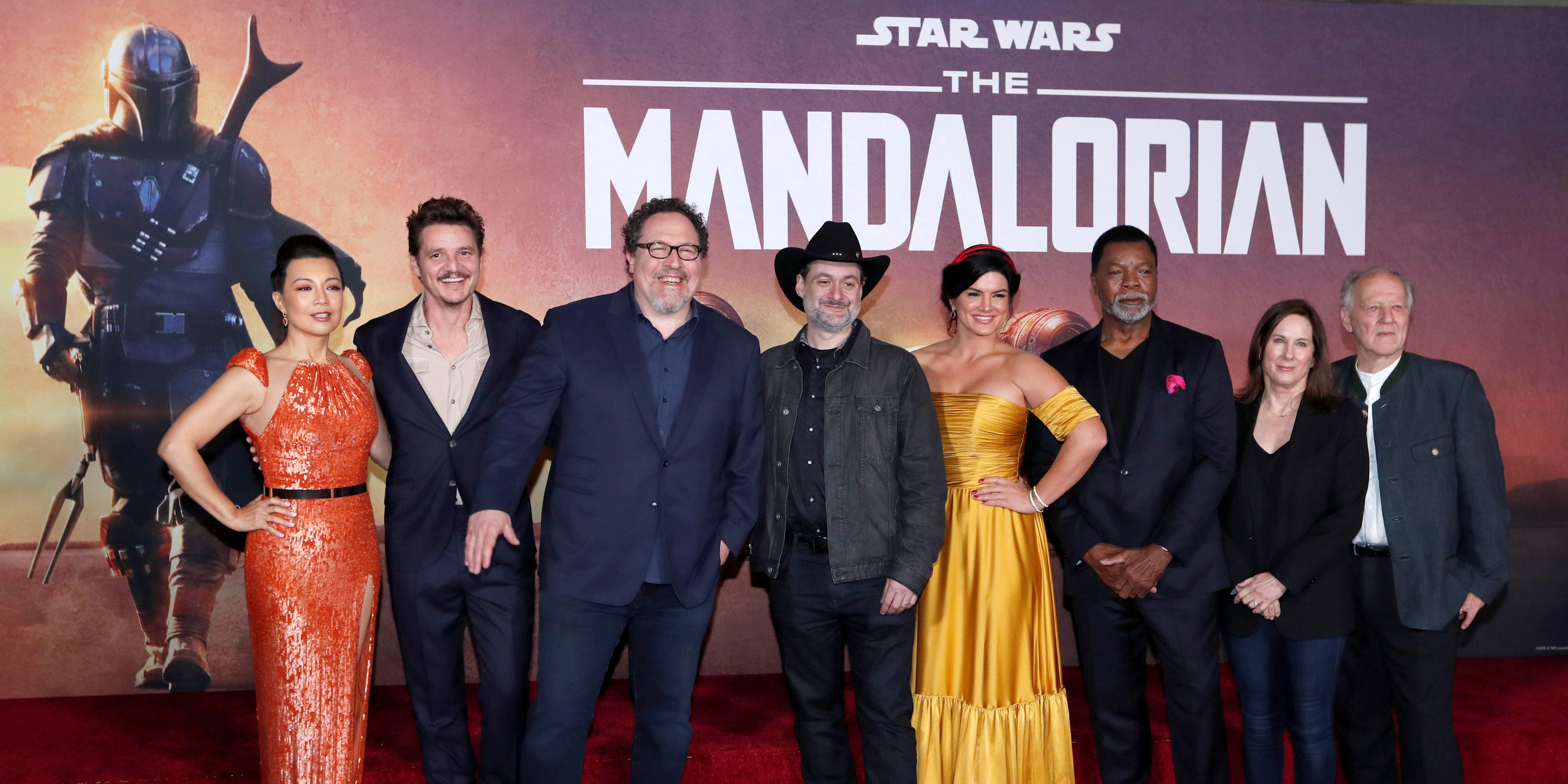 The creators and cast of “The Mandalorian” celebrating the series' premiere.

This eight-part documentary series offers a behind-the-scenes look at the production of “The Mandalorian.” The show includes interviews, never-before-seen footage, and roundtable conversations with the cast and crew. Executive Producer Jon Favreau serves as the documentary’s host. 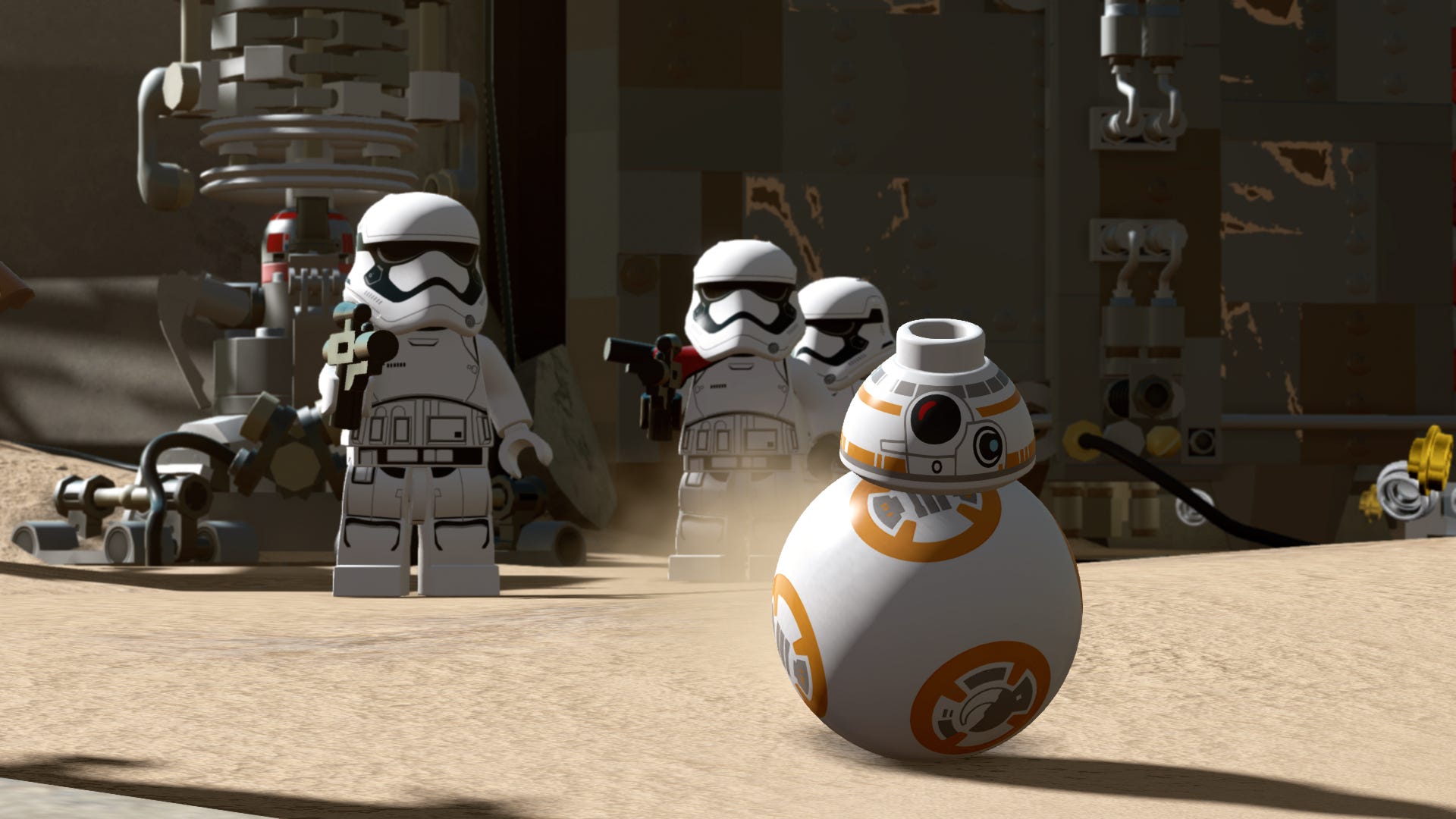 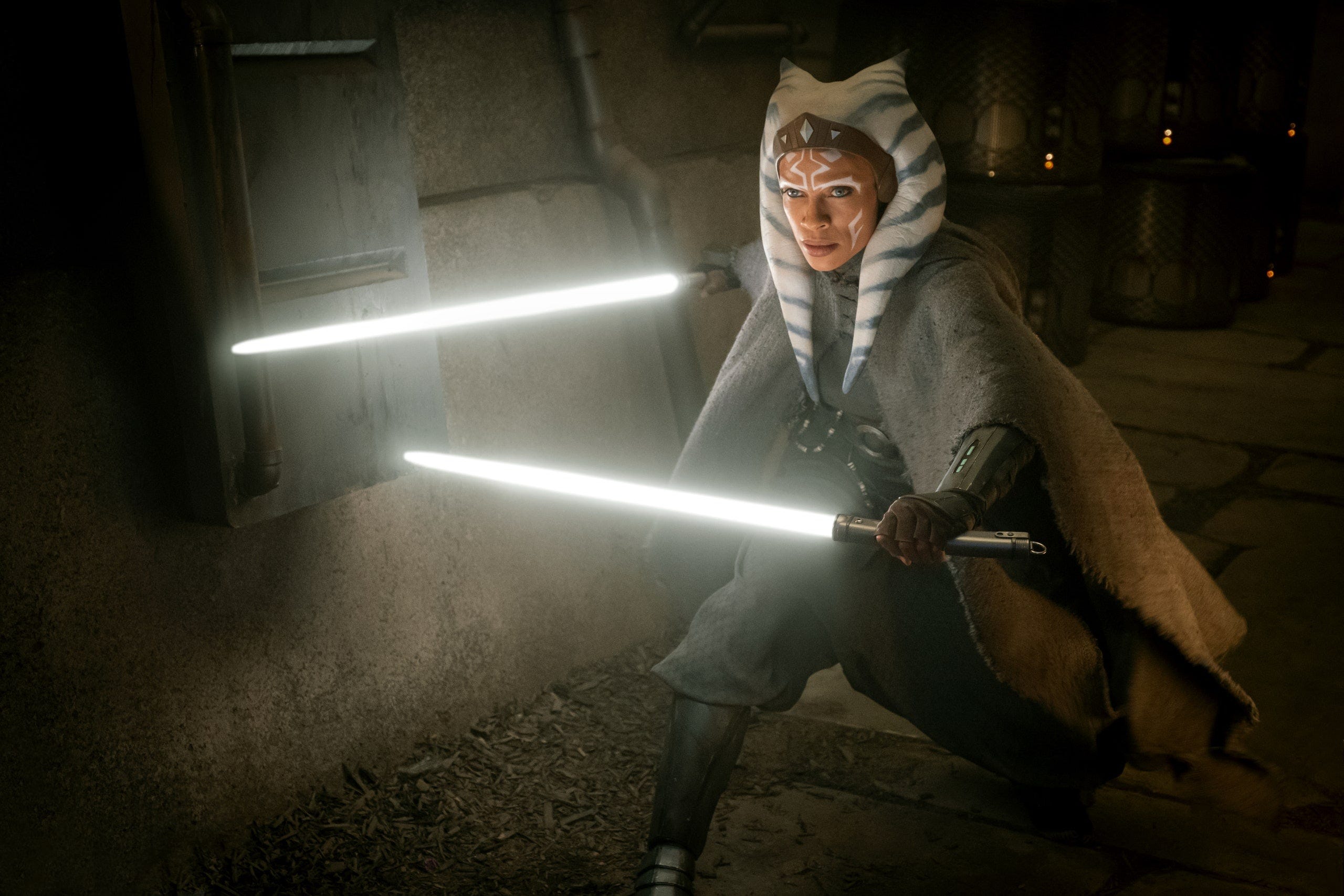 Ahsoka is a Jedi first introduced in “The Clone Wars” animated series, but the Disney Plus show will feature an adult version of the character played by Rosario Dawson. Ahsoka made her first live-action appearance during season two of “The Mandalorian.” The new series focuses on a villain named Grand Admiral Thrawn, a name that’s quite familiar with fans of “Star Wars” comic books and extended universe novels. Disney has not announced a premiere date yet. 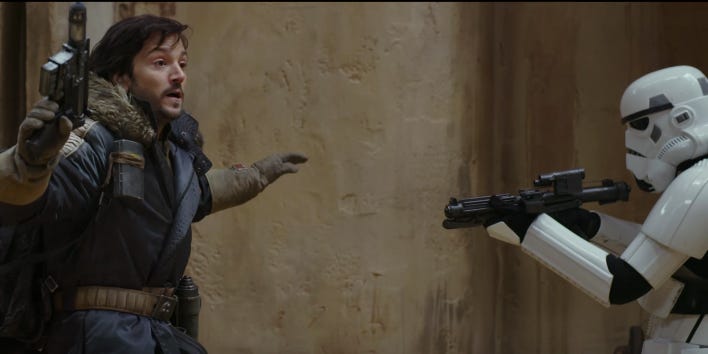 “Andor” is a spy thriller with Diego Luna reprising his role as Cassian Andor from 2016’s “Rogue One.” Alan Tudyk also stars as the voice behind the droid K-2SO. As of publication time, there is no date for when this will be released. 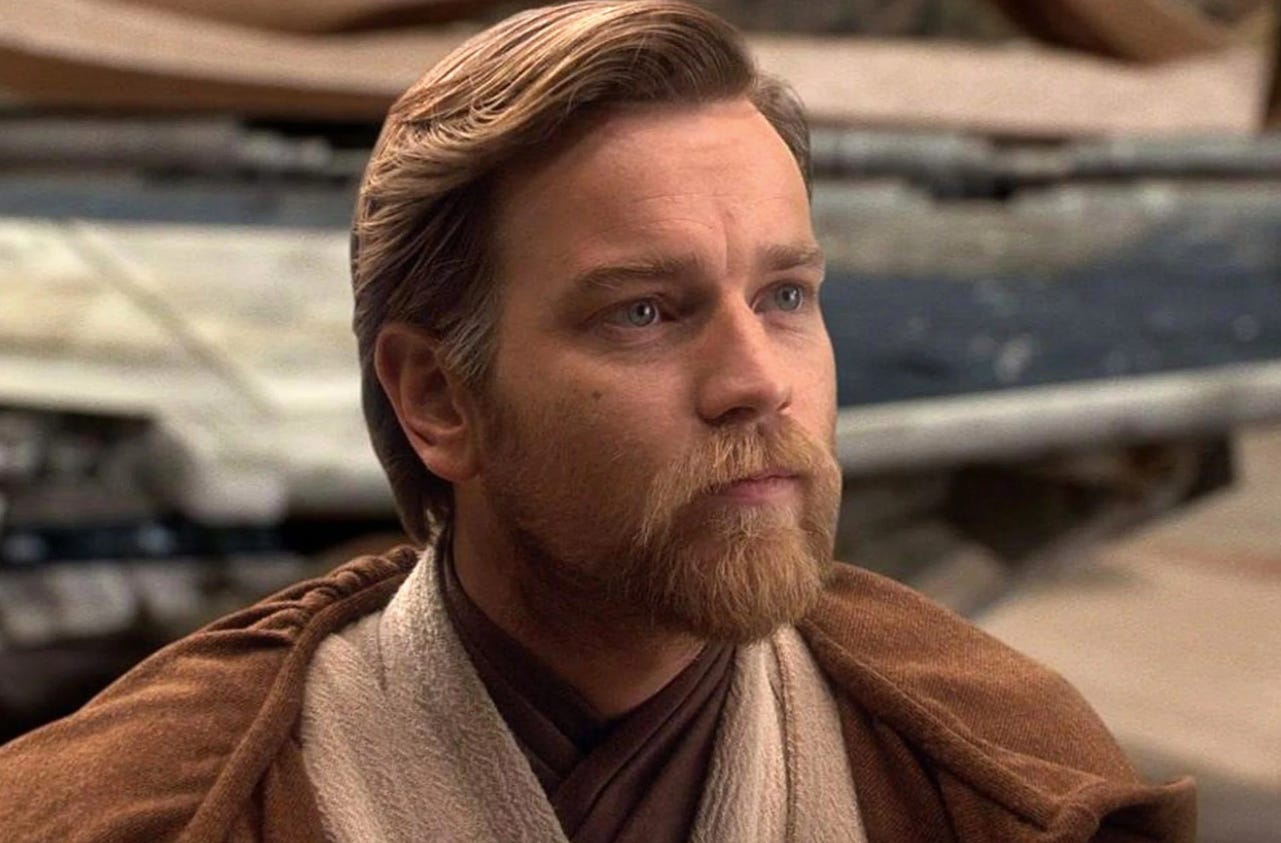 One of the most anticipated Star Wars projects boasts the return of Ewan McGregor in the role of Obi-Wan Kenobi.

The as-yet-untitled Kenobi series is set eight years after the events of “Star Wars: Revenge of the Sith.” Following several delays, the show is now scheduled to start filming in March 2021. Deborah Chow is attached to direct the series. Chow previously directed two episodes of “The Mandalorian.” 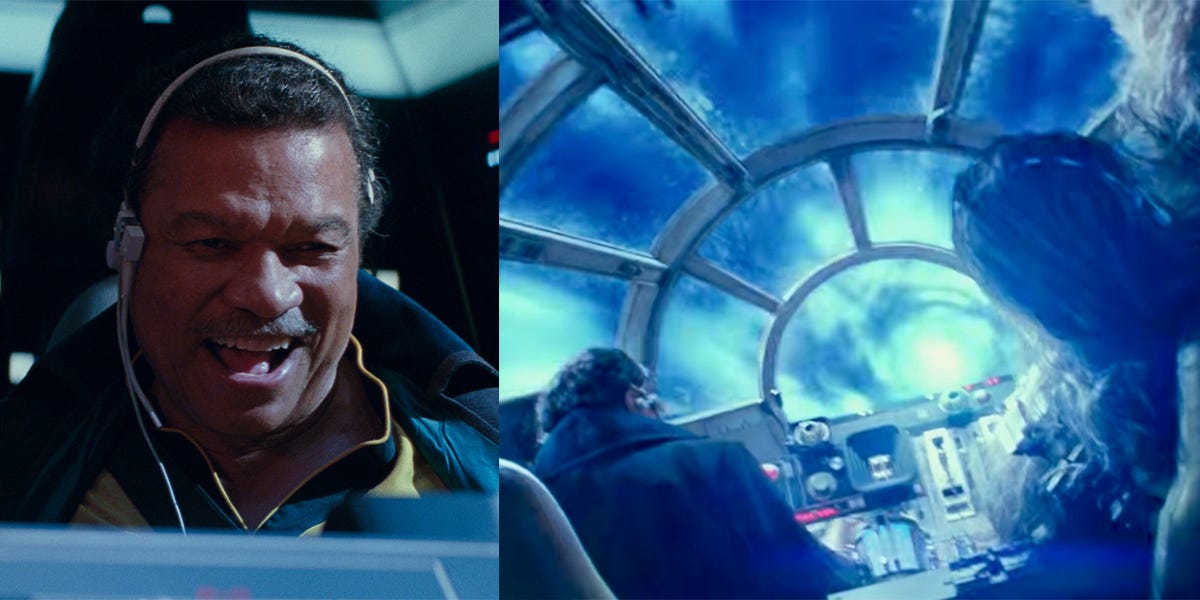 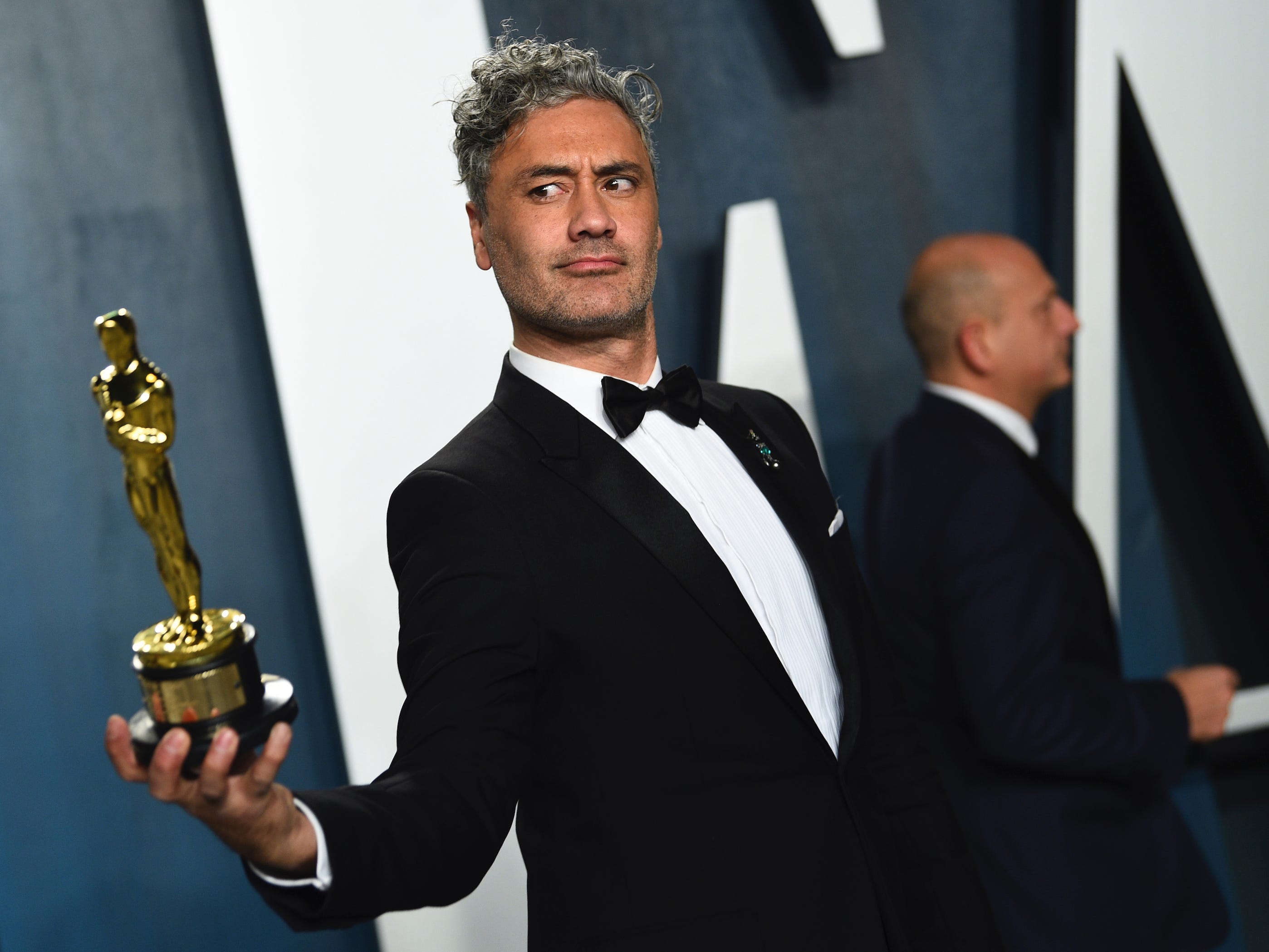 Taika Waititi, award-winning director of films like “Thor Ragnarok” and “Jojo Rabbit,” is developing his own film set in the “Star Wars” universe. Waititi’s previously worked on “The Mandalorian,” voicing the droid character IG-11 and directing the finale of season one. 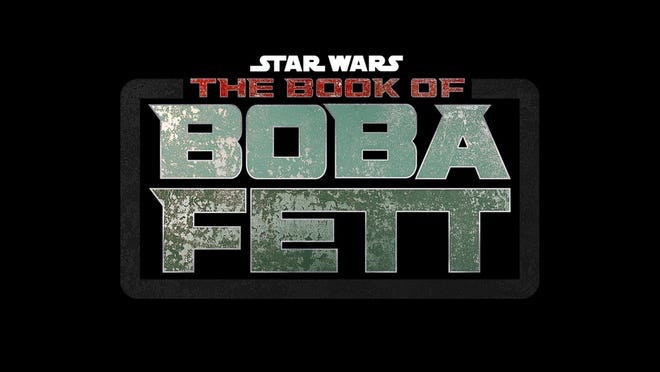 Temuera Morrison returns to his role as Boba Fett, the iconic bounty hunter from the original trilogy. “The Book of Boba Fett” comes decades after the character was presumed dead in “Star Wars: Return of the Jedi,” and will follow Fett’s ascension as the leader of the criminal underworld on Luke Skywalker’s home planet of Tatooine. 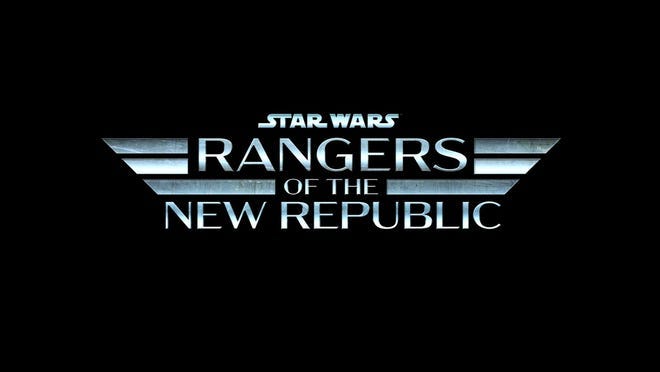 “Rangers of the New Republic” is a new series created by “The Mandalorian” showrunners Jon Favreau and Dave Filoni. The show is expected to connect with “The Mandalorian” and “Ahsoka,” but it’s not clear if the new series will feature any existing characters from the “Star Wars” universe. A release date has not been announced yet. 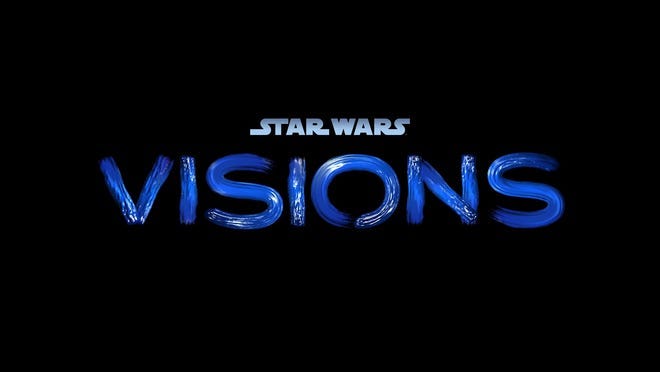 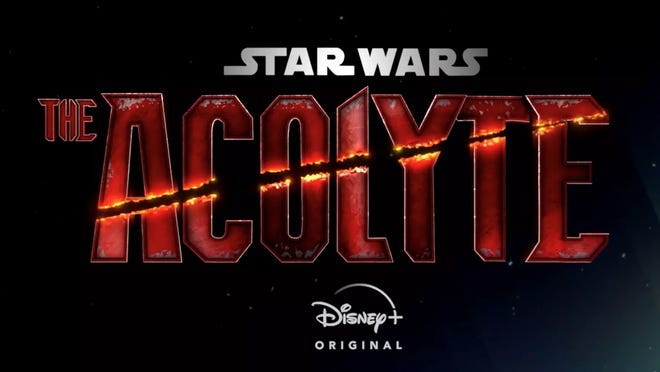 Disney describes ‘The Acolyte” as a mystery-thriller that explores the dark side of the Force in the final days of the High Republic, an era that came hundreds of years before the “Star Wars” films. Leslye Headland, a co-creator of the Netflix series “Russian Doll,” will write and produce the show. 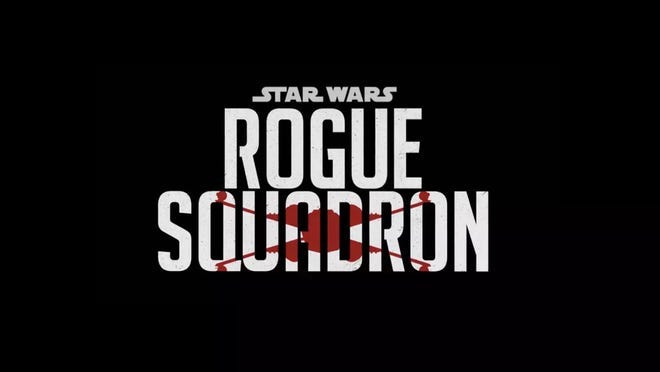 ‘Rogue Squadron” is a new film coming in 2023 from “Wonder Woman” director Patty Jenkins. The “Rogue Squadron” name has been used for comic books and video games that focus on the Republic’s ace pilots. While details on the film are slim, you can expect plenty of high-flying starfighter battles based on the name alone.

R2-D2 and C-3PO, the lovable robots who accompany the ‘Star Wars’ heroes across multiple adventures, will receive their own animated film, ‘A Droid Story.’

What is Disney Plus and how much does it cost?

Here is a full breakdown of the prices.

Each membership gets you ad-free streaming and unlimited downloads for a growing collection of movies and shows from Disney, Pixar, Marvel, Star Wars, National Geographic, and 20th Century Fox.

Read everything else you should know about Disney Plus here:

Source: Every Star Wars movie and show you can stream on Disney Plus – from ’A New Hope’ to ’The Mandalorian’