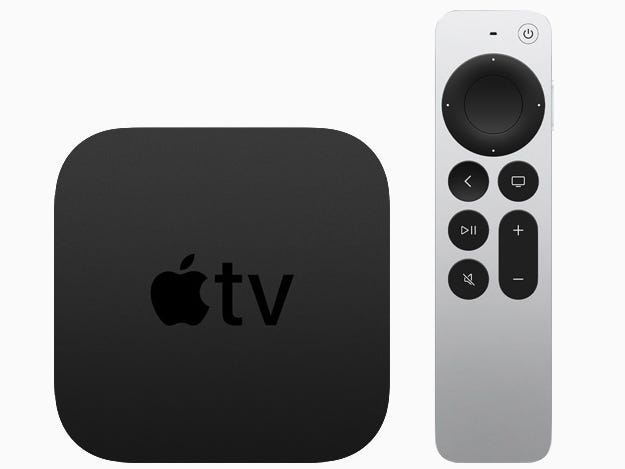 Apple announced a new Apple TV 4K during its Spring Loaded event.
The fifth-generation Apple TV starts at $179 and was made available for preorder on April 30.
Apple also announced a new iMac and a new item-tracking accessory called AirTags.

Apple just revealed a new version of the Apple TV 4K, the company's signature set-top streaming box. The new Apple TV starts at $179, the same price as the current model, and was made available for preorder on April 30.

Apple TV 4K will begin replacing the current model in stores in the second half of May. Apple introduced the new product during its Spring Loaded event on April 20, alongside a new iMac and new accessory called AirTag.

Apple last updated the Apple TV in 2017, and the new model will still be capable of 4K playback in Dolby Vision and HDR10 for enhanced colors and contrast. Unlike the previous model, the new Apple TV 4K will use the A12 bionic processor.

The more powerful hardware will enable support for high frame rate (HFR) content and improve overall performance – all for the same starting price as the 2017 model. In addition, a new color balance feature will let you use your iPhone's sensors to calibrate the Apple TV's display settings to best match your TV and room lighting.

A brand-new Siri remote is also included. The remote is cased with 100% recycled aluminum and features a touch-enabled directional pad and jog wheel for easy control. The Siri voice control button is now on the right side, in a similar position to the iPhone.

The new Siri remote will also be packaged with the standard Apple TV HD model. The Apple TV HD costs $149. The new $59 Siri remote is available separately for preorder and works with older versions of Apple TV.

Source: The new Apple TV 4K adds a better Siri remote and more power for $179 – here’s how to preorder

I try a lot of skincare for my job, and Maelove makes some of the best products I’ve ever reviewed