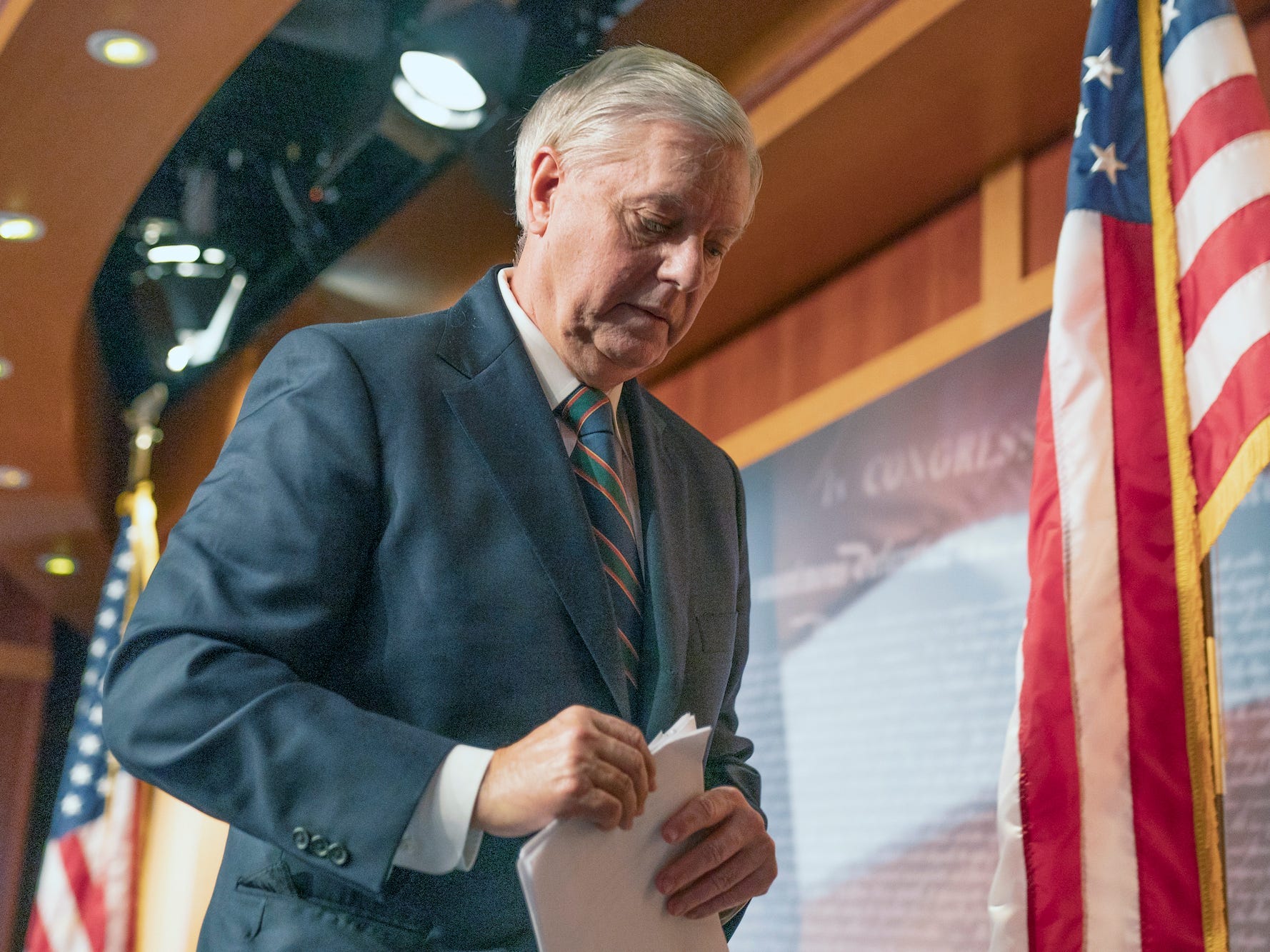 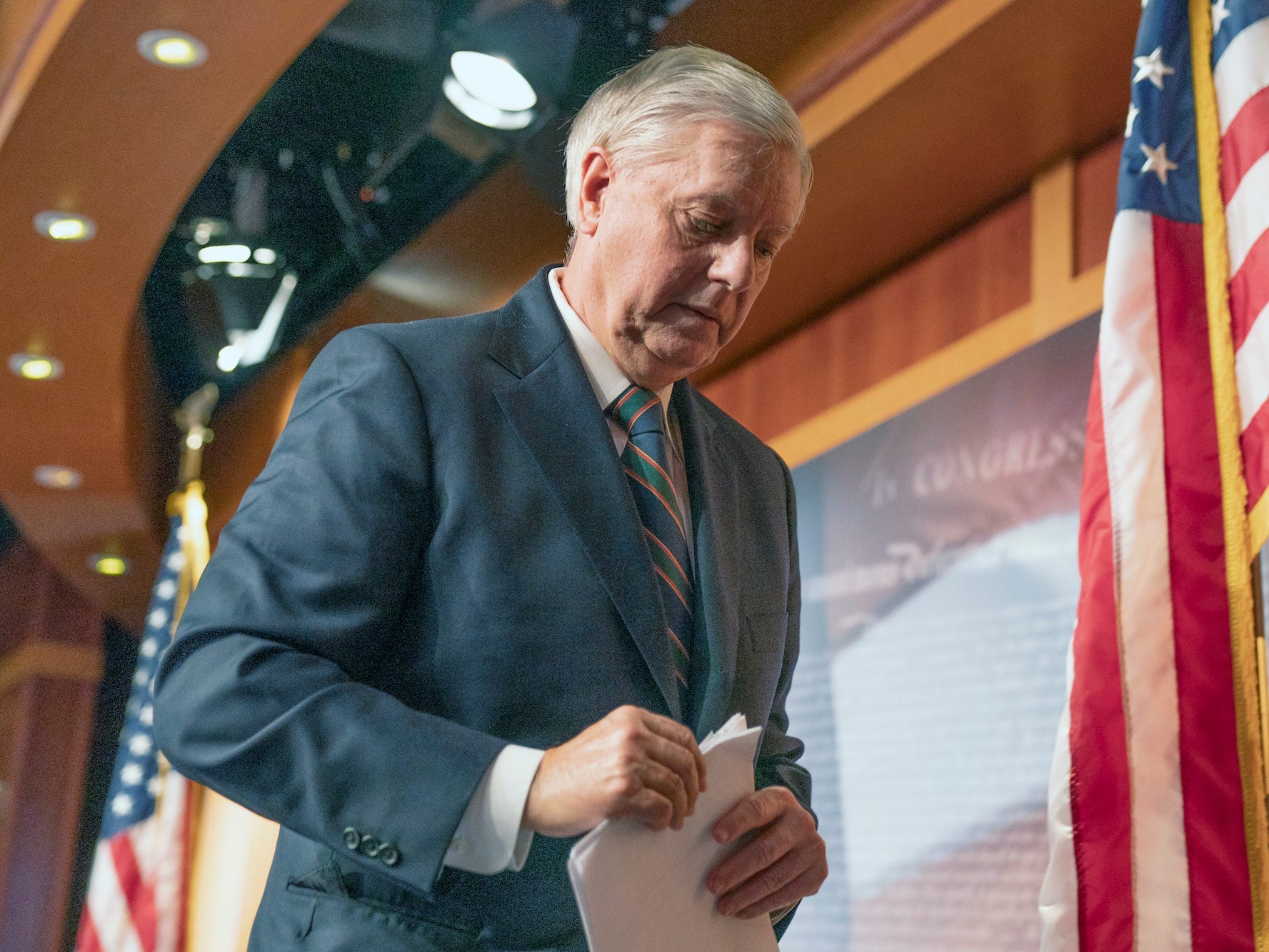 Republican lawmakers responded to Biden's decision to withdraw all US troops from Afghanistan.
Hawkish lawmakers' positions on a US pullout were similar to when Trump proposed it, though their protestations this time around were much more voluble.
Lindsey Graham called the move “dumber than dirt,” saying Biden was “paving the way for another 9/11.”
See more stories on Insider's business page.

Several top Republican lawmakers have responded harshly to Biden's decision this week to pull US troops from Afghanistan.

Biden announced on Wednesday after 20 years, the US will withdraw some 2,500 troops from Afghanistan by September 11 this year, the anniversary of the terrorist attacks on the World Trade Center and the Pentagon.

“We were attacked. We went to war with clear goals. We achieved those objectives,” Biden said on Wednesday. “Bin Laden is dead and al Qaeda is degraded in Afghanistan and it's time to end the forever war.”

But some Republican leaders did not share his sentiments.

While many of their positions on an Afghanistan withdrawal remained by and large the same as they were six months ago, hawkish Republicans responded harshly to Biden's announcement in a stark contrast from the comparatively mild response that they leveled at former President Trump when he proposed the same plan.

President Trump said in November that he wanted “all” troops home by Christmas, and for a full withdrawal to be completed by January 15, before Biden's inauguration.

At the time, South Carolina Sen. Lindsey Graham said: “We have a chance to end this war in Afghanistan smartly and well. But we're going to need a residual US force, a counterterrorism presence for years to come, because I don't trust the Taliban to police al Qaeda and ISIS.”

Six months later, Graham is among the most passionate deniers of Biden's decision for troop withdrawal, calling it “dumber than dirt and devilishly dangerous.”

“President Biden will have, in essence, canceled an insurance policy against another 9/11,” Graham said in a statement reported by The Hill.

He went on to say that a residual counterterrorism force would essentially be the US's insurance policy against the rise of radical Islam in Afghanistan. This insurance, if taken away, he said, could pave the way for “another attack against our homeland or our allies.”

Graham continued to repeat claims that a US withdrawal from Afghanistan would spark another 9/11 in a Fox News interview, telling Sean Hannity that Afghanistan will “disintegrate into civil war.

He then held a press conference on Wednesday, warning women in Afghanistan and the US that “terrorists were coming for them.”

“I pray for you, the women of America. The people will do what they're doing to their own women, they'll hurt us all,” Graham said.

Graham continued with his speech, gesticulating at a printed-out photo of the Twin Towers burning, saying: “What makes you think this won't happen again?”

Mitch McConnell: US withdrawal a “gift” to enemies 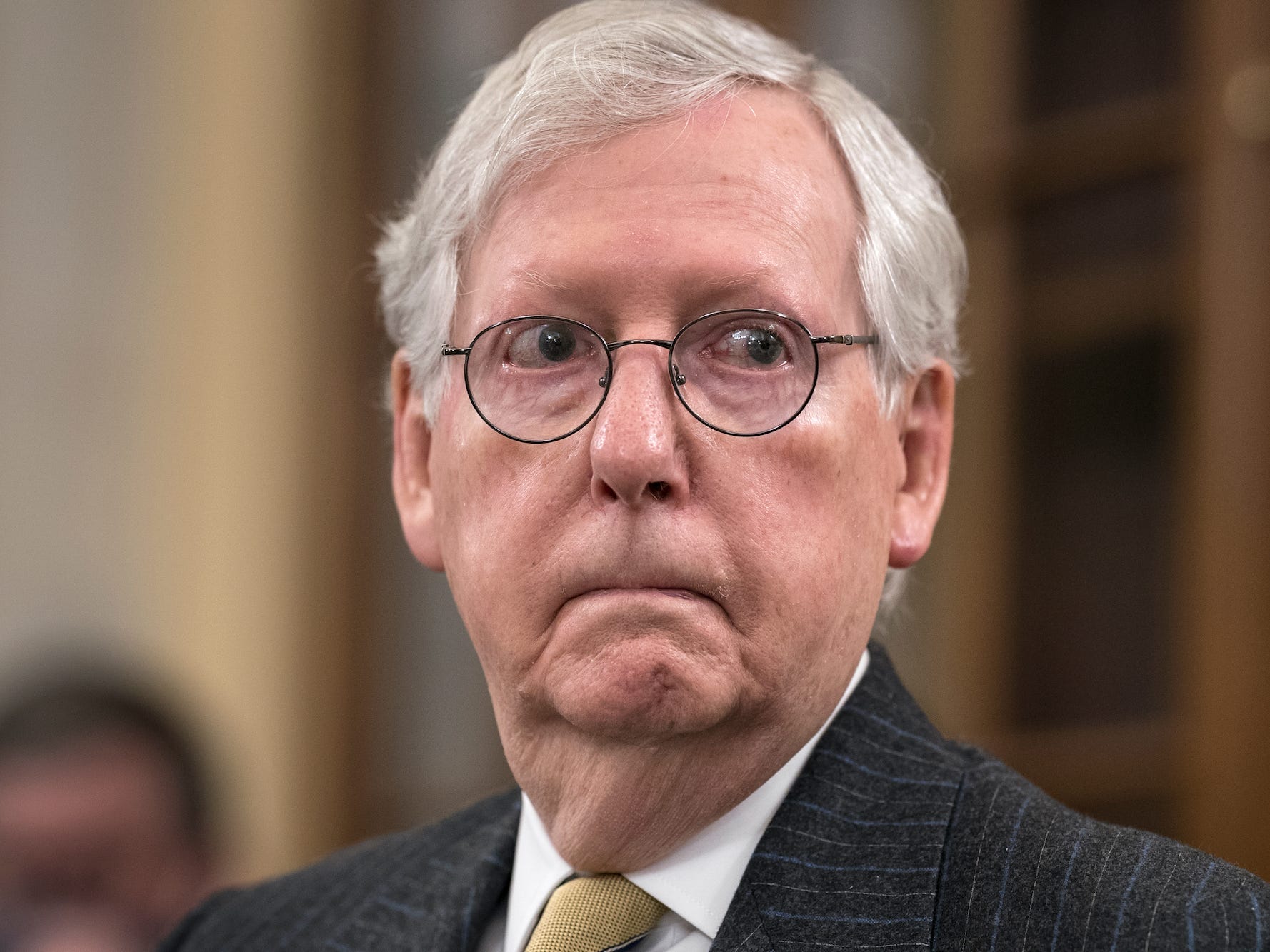 Senate Minority Leader Mitch McConnell, R-Ky., listens as the Senate Rules Committee holds a hearing on the “For the People Act,” which would expand access to voting and other voting reforms, at the Capitol in Washington, Wednesday, March 24, 2021.

Sen. Minority Leader Mitch McConnell has consistently rejected a withdrawal from Afghanistan. McConnell warned on Tuesday that pulling out the troops would be a “grave mistake.”

Speaking on the Senate floor, McConnell said: “The administration decided to abandon U.S. efforts in Afghanistan, which have helped keep radical Islamic terrorism in check. And bizarrely, they've decided to do so by September the 11th.”

“Apparently, we're to help our adversaries ring in the anniversary of the 9/11 attacks by gift-wrapping the country and handing it right back to them,” he added.”

He went on to call the withdrawal of US forces a “retreat in the face of an enemy that has not yet been vanquished, and an abdication of American leadership.”

In November 2020, McConnell broke with Trump and spoke up against the extraction of US troops from Afghanistan, warning against a “premature American exit,” saying it would “hurt our allies and delight the people who wish us harm.” But in the same breath, he also gave the former president credit for emerging victorious over terrorists, and other geopolitical wins in North Korea.

House Republican Liz Cheney of Wyoming called Biden's decision a “huge propaganda victory” for terrorists. Cheney is the daughter of Dick Cheney, who served as vice-president under former President George W. Bush on 9/11.

Speaking to The Hill, Cheney said: “Any withdrawal of forces based on a political timeline… that is not based on conditions on the ground puts American security at risk.”

She added that she was “not sure” why September 11 was selected as the deadline for a full withdrawal.

“I can tell you that that is a huge victory, a huge propaganda victory for the Taliban, for al Qaeda. The notion that on the day that they attacked us, we are going to mark that anniversary by withdrawing our forces?” she said.

Cheney had also previously criticized Trump for brokering a “peace deal” with the Taliban, saying US withdrawal should be dictated by conditions on the ground, not “arbitrary deadlines.” Sen. Jim Inhofe of Oklahoma, appeared to flip flop on Afghanistan.Inhofe, who until recently was the leader of the Senate Armed Services Committee, released a statement in November offering his support of Trump's plan for troop withdrawal in the region.

“I have been assured by Acting Secretary of Defense (Christopher) Miller and the president's national security adviser, Ambassador (Robert) O'Brien, that they are consulting with our allies, and that, with their plan, we will be able to carry out our mission of protecting the American people from terrorist attacks originating in Afghanistan, safeguarding Afghan gains and supporting our partners and allies,” Inhofe said.

But in a statement released Tuesday, Inhofe called Biden's move “reckless,” “dangerous,” and “a political decision on something where there isn't any justification.”

“No one wants a forever war, but I've consistently said any withdrawal must be conditions-based,” he continued. “Arbitrary deadlines would likely put our troops in danger, jeopardize all the progress we've made, and lead to civil war in Afghanistan.”

Cruz, who is known to be a vocal critic of Biden, said he was “glad the troops are coming home,” while Lummis said she was “pleased,” and even wished the withdrawal could have taken place by the initial deadline of May 1.

Some Democrats have also expressed concern over a hasty withdrawal.

Sen. Tammy Duckworth, a retired Army National Guard lieutenant colonel, said during a Fox News interview in March: “I want our troops to come home, absolutely. But, I want them to come home in a way that we don't have to send them back three months later, six months later. And so, as a soldier, you never tell your enemy, 'hey by the way we're leaving next week on Tuesday at 3 pm.' You don't do that. You don't tell your enemy what your actions are going to be that's just common sense.'”

Source: Top GOP hawks come out in full force against an Afghanistan withdrawal by September 11