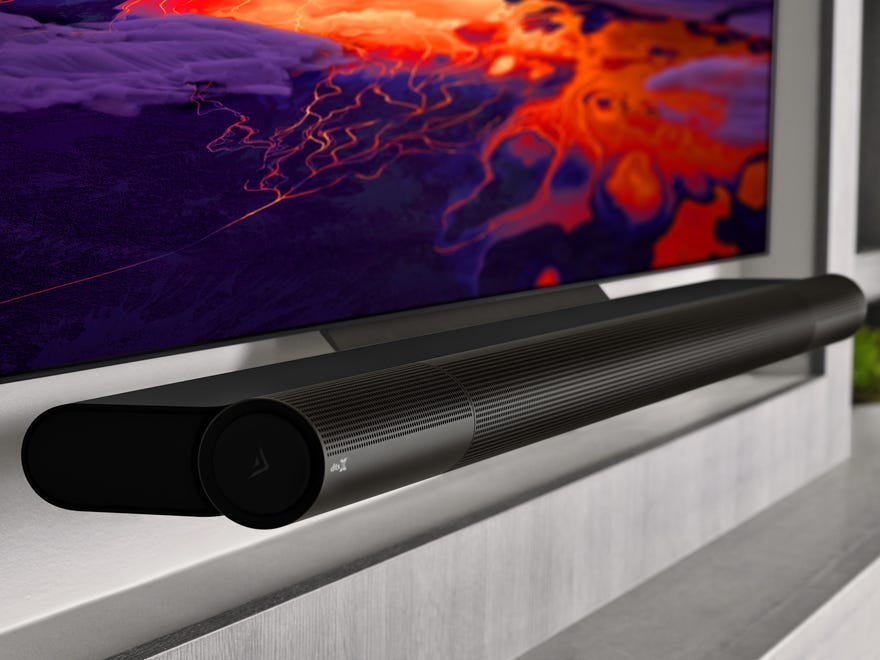 Vizio's Elevate is more than a typical soundbar; it's a full home theater system for under $1,000.
The device features unique rotating speakers and immersive 5.1.4 Dolby Atmos performance.
The Elevate is perfect for buyers who don't have the cash or space for larger speakers and a receiver.
Table of Contents: Masthead StickyElevate 5.1.4 Soundbar (small)

Putting together a proper Dolby Atmos home theater system can be a complicated and expensive task. For a traditional setup, you need multiple speakers and a separate AV receiver to power and process everything.

Though this type of configuration offers the best performance, there are many buyers who simply don't have the space and budget for that kind of investment. And that's where a Dolby Atmos soundbar system like the Vizio Elevate comes in.

The Elevate is designed to offer a full 5.1.4 surround sound solution in a convenient package, complete with a soundbar, satellite speakers, and a subwoofer. The system comes with everything you need and it even features built-in amplification so you don't have to buy a receiver.

With its up-firing speakers, the Elevate can make it seem like sound effects are coming from above your head. The front speakers also feature a clever rotating design, which allows them to automatically switch from up-firing to front-firing positions depending on what you're watching.

I've been reviewing home theater products for nearly a decade, and after spending a month with the Elevate, I've come away impressed by the soundbar's performance and value. The system's software is a little glitchy, but you'd be hard pressed to find a better 5.1.4 home theater package for this price.

The Elevate features a sleek, industrial design with an all black finish and aluminum build. Though a system like this is compact compared to a traditional home theater setup, keep in mind that the Elevate and its subwoofer are fairly large compared to most soundbar packages.

The system offers support for a total of 5.1.4 channels. This means there are five ear-level channels, one subwoofer, and four up-firing channels for height effects.

The height channels work by angling sound up to bounce effects off your ceiling. This makes it sound as if the audio is coming from above your head. Vizio takes the Elevate further by incorporating special rotating drivers. 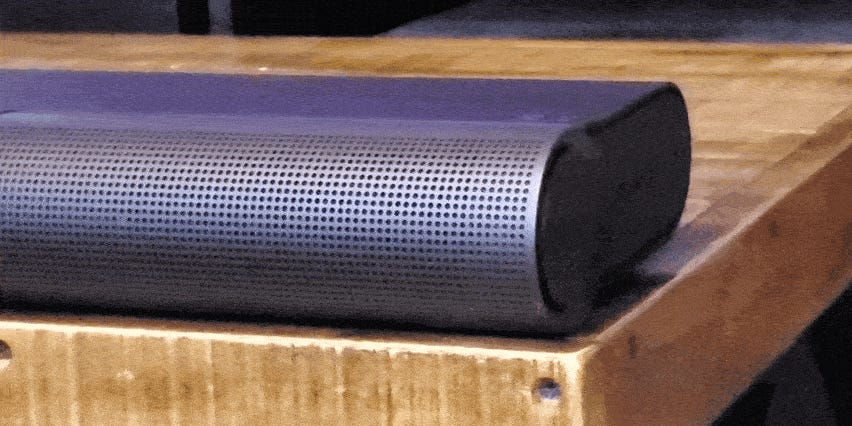 The Vizio Elevate features a rotating speaker that can switch between up-firing and front-firing audio.

The front height speakers can automatically rotate up or forward depending on what you're listening to. When they're up you can hear overhead effects. When they're down, they help to create a wider front soundstage.

Various inputs are included on the back of the bar, including one HDMI eARC to receive audio from your TV, as well as two HDMI inputs to connect additional sources, like a game console or Blu-ray player. Full 4K HDR video passthrough is supported, and the Elevate supports both Dolby Atmos and DTS:X decoding. DTS:X was incompatible with older Vizio soundbars, so it's nice to have on this model.

Vizio also includes a handy remote with a small text display to scroll through settings and modes. Unlike previous models, this year's remote is even backlit. 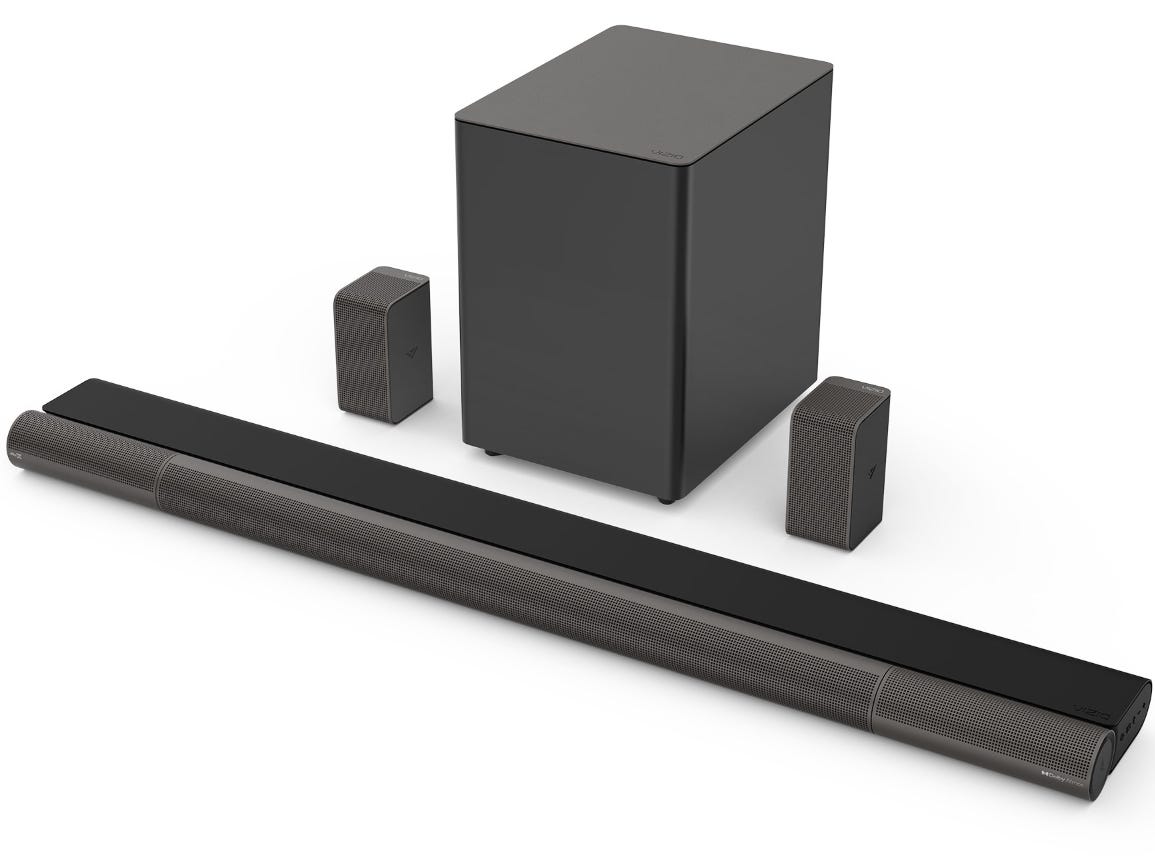 The system includes a soundbar, two satellite speakers, and a subwoofer.

To get the system set up, you simply need to plug the power cables in, connect the soundbar to your TV, and run the satellite speaker cables to the subwoofer. The subwoofer wirelessly connects to the soundbar. Though having to use cables for the satellites is less convenient than a fully wireless design, the included speaker wires are long enough to suit small and medium rooms.

To update the firmware and enable Chromecast music streaming you can download the Vizio SmartCast mobile app. I had some issues getting the app to find the soundbar during my initial setup, but after restarting it was able to connect.

You can adjust settings using the remote or the SmartCast app. This includes setting your preference for the rotating speakers. For the most accurate audio experience with movies, I recommend using the Elevate Auto setting and the Direct EQ mode. 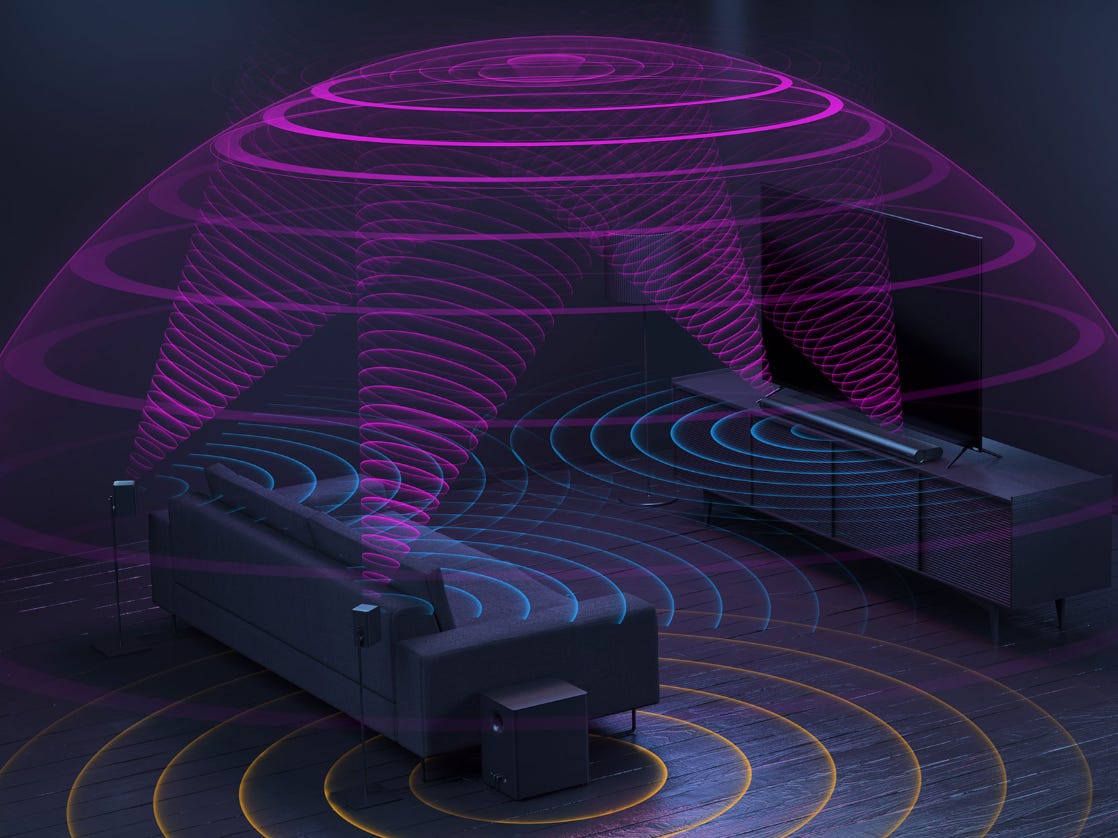 The Elevate's up-firing speakers bounce sound off the ceiling to create overhead effects.

For a 5.1.4 soundbar in this price range, the Vizio Elevate delivers fantastic sound quality. To be clear, this isn't an audiophile system that can equal a dedicated home theater rig with floorstanding and bookshelf speakers, but as a space-saving and cost-saving alternative, it's a winner.

The bar itself has good separation and imaging, while the inclusion of separate satellite speakers provides genuine surround sound immersion. The up-firing channels also do a solid job simulating overhead sound, but the effect can be hit and miss depending on where you sit.

To test the system's performance I watched a bunch of Dolby Atmos and DTS:X titles on Blu-ray and streaming services, including “Jumanji: The Next Level,” “Vertigo,” “The Mandalorian,” and various clips from demo discs designed to show off systems like this.

Throughout all my testing, the Elevate engaged with an enveloping dome of sound, fully engulfing the room with audio from all directions. Having the heights in the front and back helps to avoid any gaps, creating a complete Atmos experience.

When switching to regular surround sound, the system performs equally well, rotating the heights down to create a wider front soundstage. Music also sounds good, though tracks can sound a little bright and small when using the Direct EQ mode. Switching to the Music preset opens things up nicely, creating a bit more depth.

The wireless subwoofer offers ample kick for medium-sized rooms. That said, I find the sub to be a little too aggressive. Room-shaking bass makes sense during explosions, but when low frequencies become overpowering watching a Netflix rom-com like “Holidate,” you know something is a little off.

Some key bass cues I use as test material in “Inception” and “The Tree of Life” also sound a little too harsh, leading to some unwanted vibrations that make the subwoofer stick out in my room. I ultimately prefer to have the Elevate's sub adjusted five levels below the default setting. This helps dial it in, but can rob the system of some punch. In other words, finding just the right balance is a little trickier than I'd like.

Still, the overall experience you get with the Elevate is genuinely impressive. I typically use an Onkyo 5.1.4 system with a dedicated receiver, separate bookshelf speakers, and a 10-inch subwoofer. Though I still prefer that setup, the Vizio Elevate's performance isn't that far off, and it's a much simpler and cheaper solution.

Problems with the Elevate Soundbar

As impressed as I am with the Elevate, the system isn't perfect. I've encountered some odd glitches here and there, as well as some issues with the soundbar's software.

After getting the Elevate set up, the first thing I did was boot up an episode of “The Mandalorian.” Despite everything being connected properly, there was no audio and the Elevate's remote stopped working. Suddenly, the subwoofer kicked in at full blast for no reason forcing me to quickly turn the system off for fear of angering my neighbors.

This strange glitch only happened once, however, so I consider it more of an anomaly than a major issue. There have been a few other times when the remote becomes unresponsive, though, and the SmartCast app loses connection with the soundbar occasionally.

The rotating drivers work just fine during my testing, but I 'm a little concerned there could be some issues with their longevity after lots of use. Finally, there is a faint high-pitched noise audible if you put your ears close to the satellite speakers. This isn't noticeable during regular playback, though, so I don't consider it to be a real problem.

While not ideal, I don't think any of these hiccups outweigh the Elevate's many strengths.

Should you buy it? 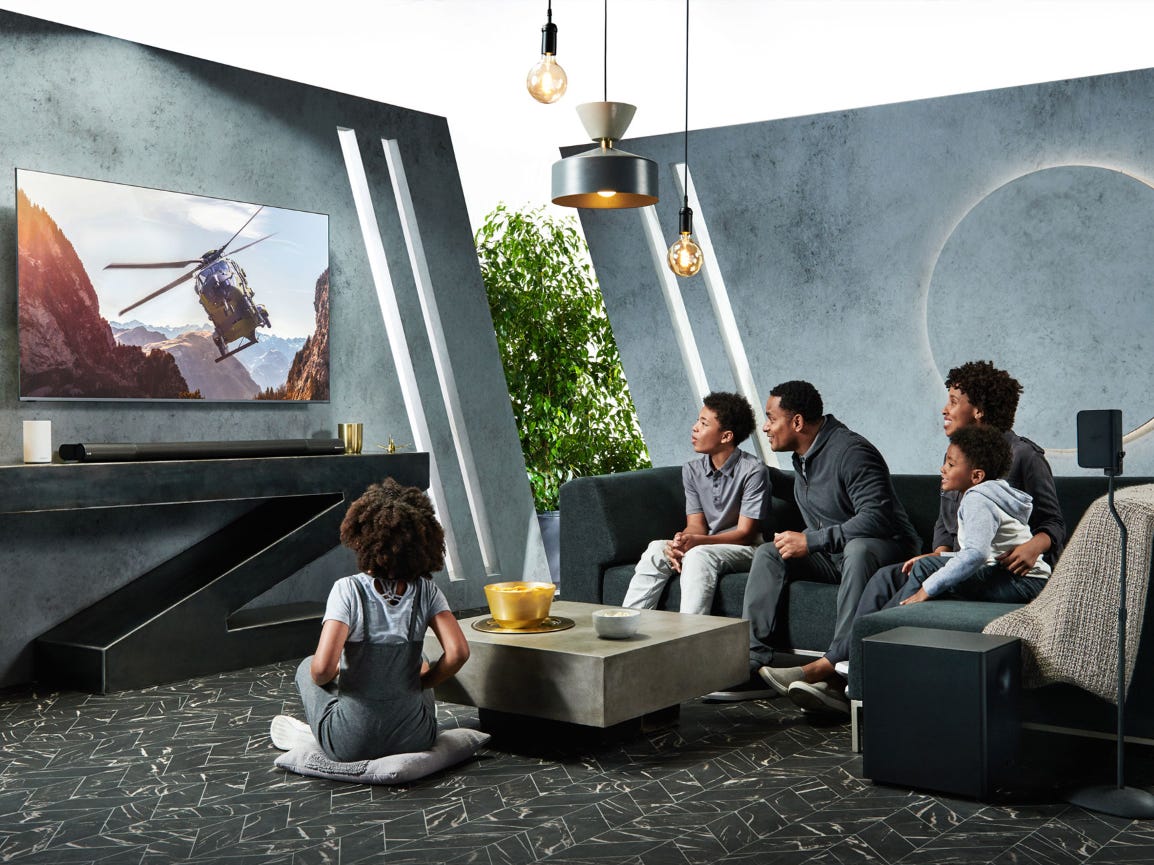 The Vizio Elevate is a good buy for anyone who wants a genuine 5.1.4 Dolby Atmos home theater system under $1,000.

Piecing together an equivalent package with separate speakers and an AV receiver is basically impossible in this price range. In fact, most 9.2 channel receivers – which is what you'd need to power 5.1.4 speakers – cost at least $1,000 on their own.

If you have that kind of cash, you can configure a larger speaker setup that sounds better than the Elevate. But, that kind of investment simply isn't realistic for everyone. Conversely, you can find plenty of smaller and cheaper soundbars, but they just don't offer the level of immersion you get with the Elevate.

The Elevate is designed for home theater fans who want to spend less and save a little space without losing out on a full Dolby Atmos surround sound experience. And in that sense, it delivers exceptional value and performance.

What are your alternatives?

When it comes to similar Dolby Atmos soundbars with satellite speakers, the Elevate has some competition from brands like Samsung, as well alternative models from Vizio itself.

That said, the HW-Q950T lacks Vizio's unique rotating speakers. The HW-Q950T is also typically sold for at least $350 more than the Elevate.

It's also worth considering two of Vizio's cheaper 5.1.4 soundbars: the SB46514-F6 and the SB36514-G6. The SB36514-G6 is smaller compared to the Elevate, while the SB46514-F6 is more similar in size. Both of these models lack eARC and DTS:X support, however, and neither have rotating speakers or a backlit remote. 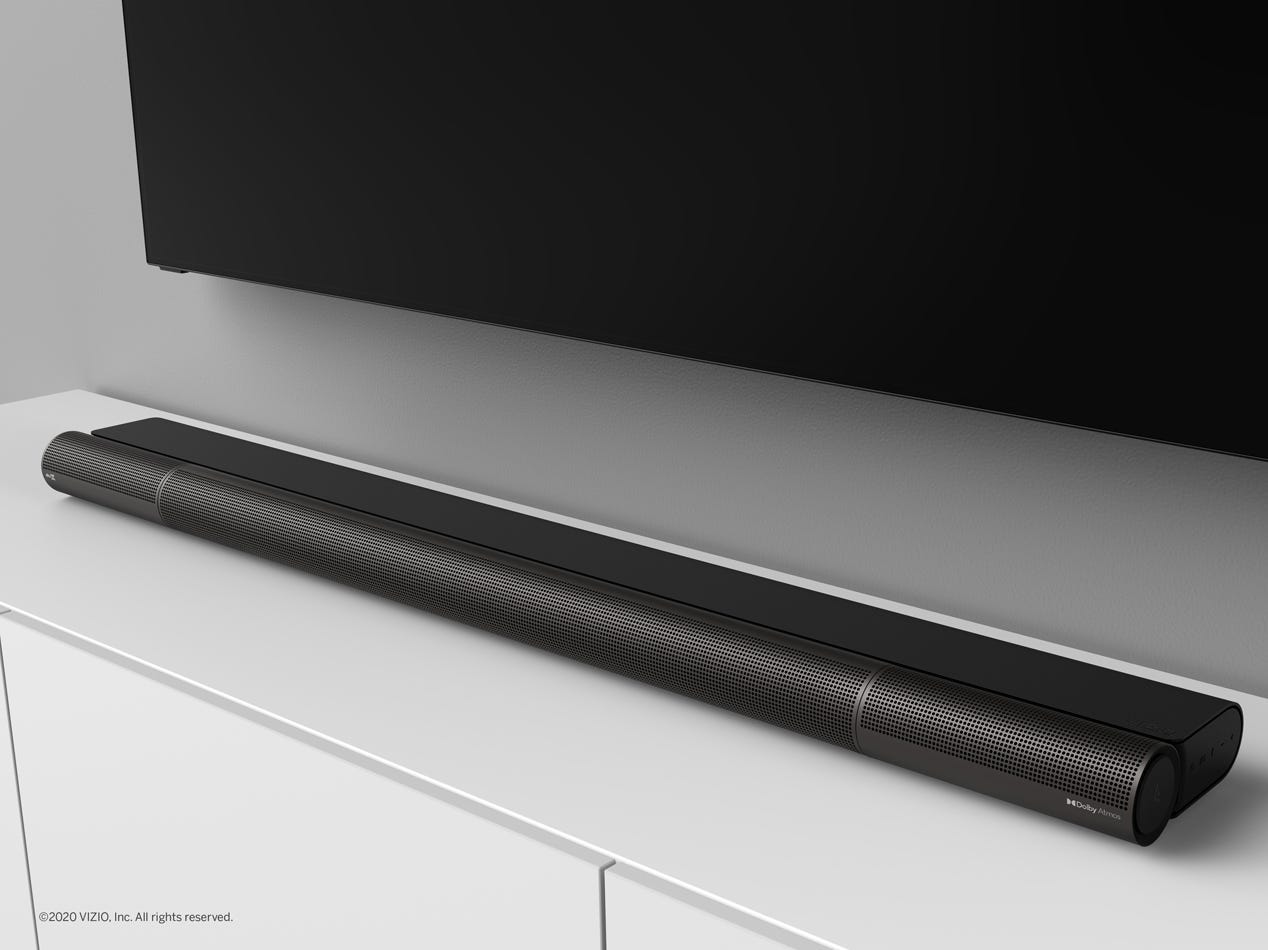 If you don't have the space or money to invest in a traditional home theater setup, then the Vizio Elevate 5.1.4 soundbar is the next best thing.

For a retail price of $1,000, you get everything you need for a complete Dolby Atmos experience – no costly AV receiver required. And it sounds fantastic for the money. The system is even frequently on sale for around $900, which makes it an even better buy.

Source: Vizio’s Elevate is more than just a soundbar – it’s one of the best $1,000 Dolby Atmos home theater systems you can buy

How to fly in ’Minecraft’ in either Creative or Survival mode