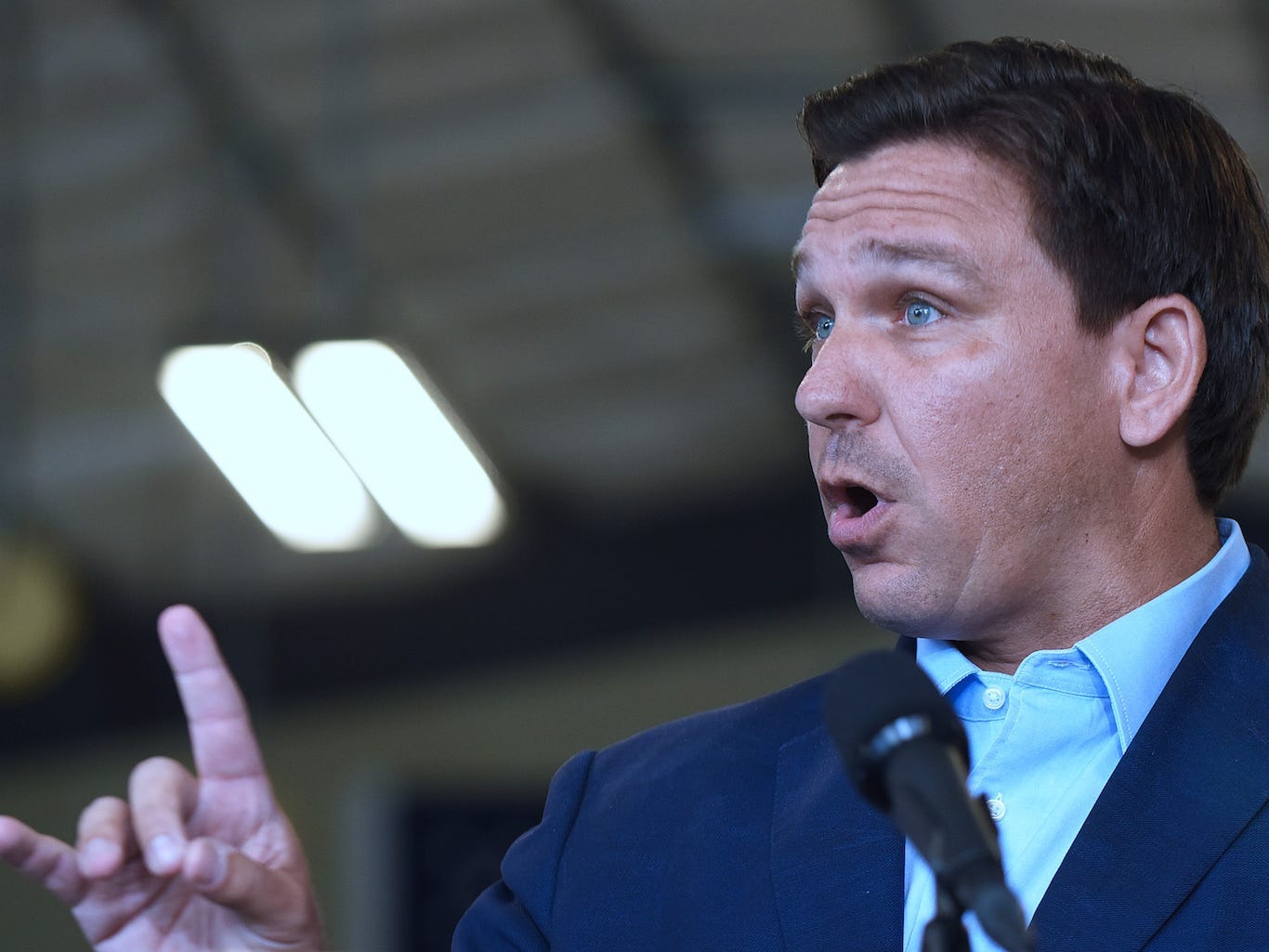 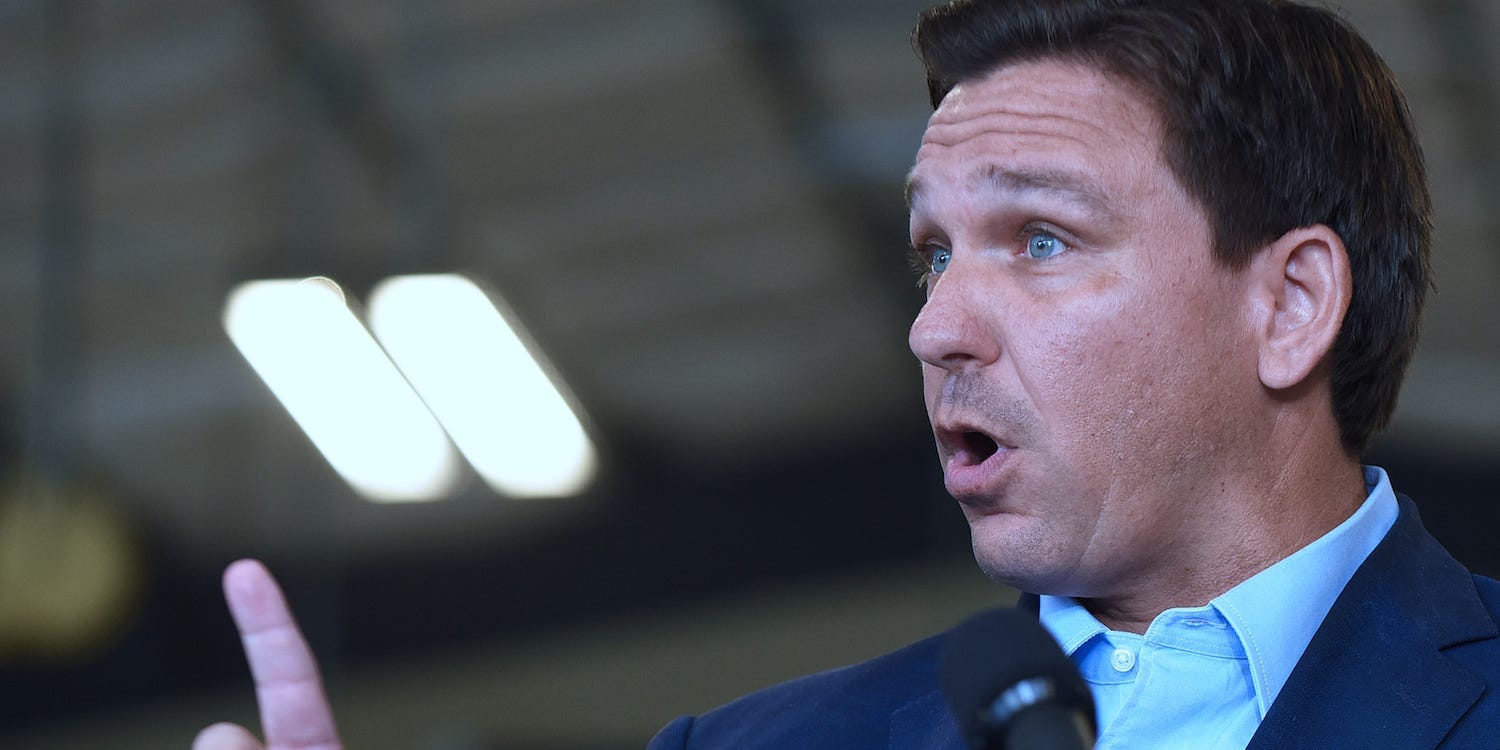 Florida Governor Ron DeSantis responds to a question from the media at a press conference at the Eau Gallie High School aviation hangar in Melbourne, Florida, on March 22, 2021.

Gov. Ron DeSantis declared a state of emergency after a leak was detected at an old phosphate plant pond.
The pond, located in Tampa Bay, stores water that contains small amounts of radium and uranium.
Residents living close to the reservoir received a warning via text message asking them to evacuate.
See more stories on Insider's business page.

Florida Gov. Ron DeSantis declared a state of emergency on Saturday after a leak was detected at an old phosphate plant pond in the Tampa Bay area that could potentially lead to a dangerous acidic flood.

Residents living close to the old Piney Point phosphate mine, located north of Bradenton, near Tampa, have been asked to evacuate their homes. Those living within a half-a-mile radius of the reservoir received a text message alert on Saturday notifying them the collapse was “imminent,” the Guardian reported.

State officials said they first discovered the leak on Friday. It was located in one wall of the 77-acre pond that holds about 600 million gallons of water, containing phosphorus, nitrogen, and small amounts of radium and uranium.

The stacks can also release large concentrations of radon gas.

Read more: People flocked to Florida and Texas for a lower cost of living during the pandemic. Some were shocked when their healthcare got way more expensive.

“A portion of the containment wall at the leak site shifted laterally, signifying that structural collapse could occur at any time,” Manatee County Director of Public Safety Jake Saur warned, according to CBS News.

Officials say they are most concerned about the flooding the rupture could cause, adding that the water that would be discharged is only “slightly acidic,” according to a statement issued by Manatee County on Twitter.

“The water meets water quality standards for marine waters with the exception of pH, total phosphorus, total nitrogen, and total ammonia nitrogen,” the statement said.“It is slightly acidic, but not at a level that is expected to be a concern, nor is it expected to be toxic.”

Workers have been desperately trying to figure out ways to stop the environmental catastrophe from happening.

Authorities were working round the clock on Saturday to pump out as much water as possible in order to minimize the effect of the potential flood. However, this process is time-consuming and can take up to 12 days.

Some workers tried to plug the hole with rocks and other materials on Friday afternoon but were unsuccessful.

“Due to a possible breach of mixed saltwater from the south reservoir at the Piney Point facility, I have declared a State of Emergency for Manatee County to ensure resources are allocated for necessary response & recovery,” DeSantis tweeted on Saturday. The governor has ordered more pumps and cranes to be transported to the area.

George Kruse, a Manatee County commissioner, said he traveled to the plant on Saturday to assess the situation but had to leave the area quickly after realizing it was a safety hazard.

“We determined that it was no longer safe to be anywhere near Piney Point, so we all kind of raced off the stacks as fast as we could,” Kruse said, according to the Guardian.

According to local media reports, locals in the area have been trying to sound the alarm on the old phosphate plans for years.

The problem goes back to 1989, where a 23,000-gallon leak of sulfuric acid from a holding tank by the pond forced the evacuation of hundreds of nearby residents.

There are at least 70 gypsum stacks in the country, about 27 of which are in Florida.

Source: Florida declares state of emergency as reservoir holding millions of gallons of radioactive wastewater ’could collapse’ at any time

The top 9 shows on Netflix this week, from ’Nailed It!’ to ’The Irregulars’

Lawyer for Matt Gaetz associate: ’I am sure Matt Gaetz is not feeling very comfortable today’