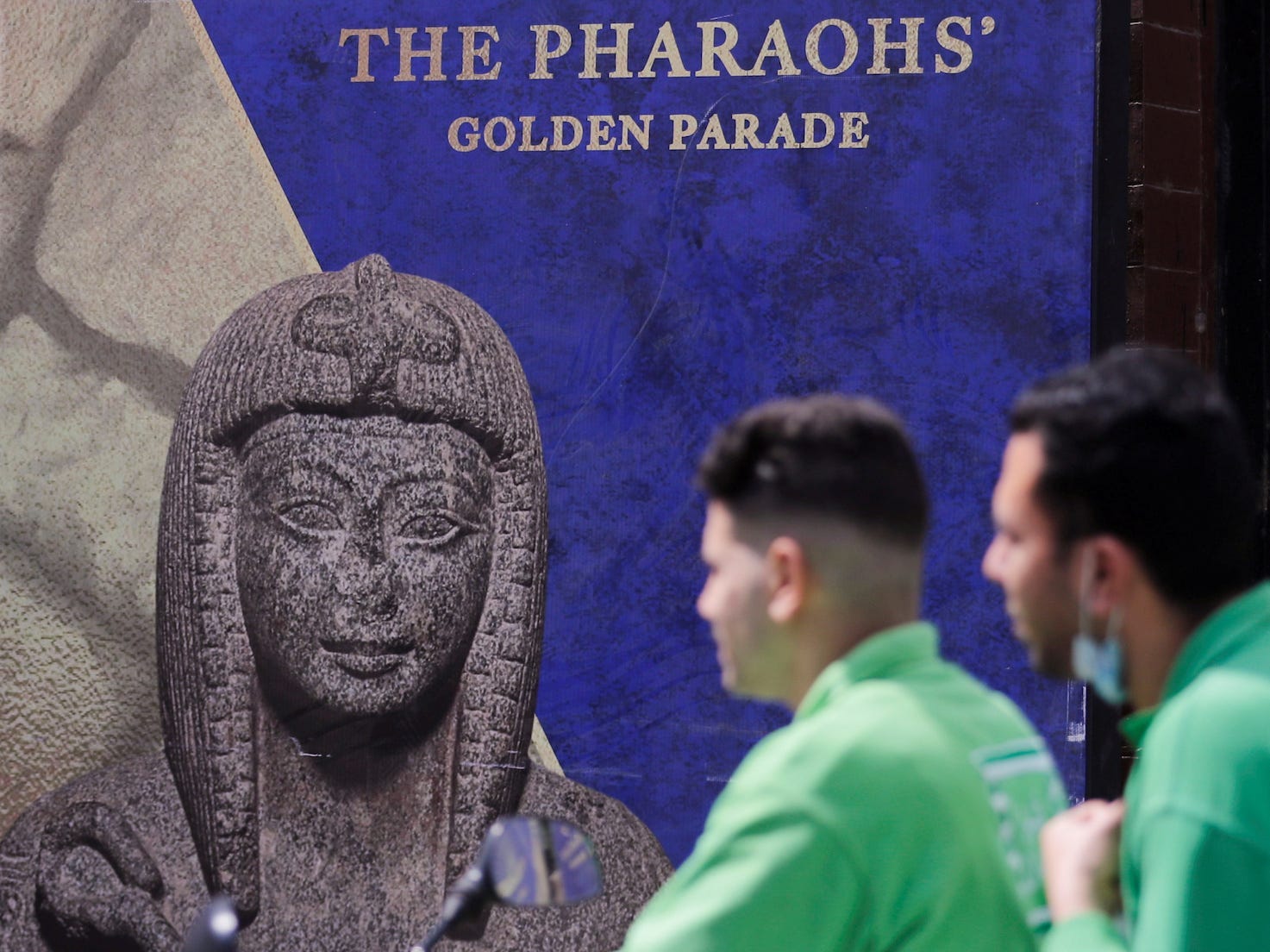 Men pass in front of poster for pharaohs golden parade in Cairo, Egypt, on April 1, 2021.

More than 20 of Egypt's ancient royal mummies will be transported to a new museum on Saturday.
Among them are the notable mummies of Seti I, Ahmose-Nefertari, and Ramses II.
They will be transported to the National Museum of Egyptian Civilization in special capsules.
See more stories on Insider's business page.

A grand parade displaying more than a dozen of Egypt's royal ancient mummies is set to pass through Cairo's streets on Saturday.

The convoy will transport 18 kings and four queens from the Egyptian Museum in Tahrir Square to the National Museum of Egyptian Civilization in Fustat, a city about 3 miles outside the capital.

Each mummy will be carried in a specially-designed glass capsule with shock-absorbers so the ancient royals won't get damaged during transportation, Egyptian archaeologist Zahi Hawass told Reuters.

The capsules will then be placed on carts that will look similar to horse-drawn war chariots and designed to provide stability.

The multi-million dollar spectacle has been designed to get people excited about Egypt's rich antiquities collections after the coronavirus pandemic put an abrupt halt on the tourist industry.

The procession of mummies will be carried in chronological order of their reigns. They will include Seti I, who died in 1279 BC, Ahmose-Nefertari, and Ramses II, the most famous pharaoh of the New Kingdom and remembered for signing the first-ever known peace treaty.

The oldest is that of Seqenenre Tao, who reigned in the 16th century BC and is thought to have had a violent death.

“By doing it like this, with great pomp and circumstance, the mummies are getting their due,” said Salima Ikram, an Egyptologist at the American University in Cairo, according to Al Jazeera.

“These are the kings of Egypt, these are the pharaohs. And so, it is a way of showing respect,” Ikram added.

Hundreds of people are expected to line the streets to witness the historic procession, the BBC reported.

Egypt, which has had more than 200,000 coronavirus cases, was on a strict lockdown in the summer of 2020 but has since lifted restrictions on open-aired gatherings.

The parade will also be live-streamed online for people outside of Cairo to watch.

The mummies will be housed in the Royal Hall of Mummies and will go on display to the general public from April 18.

Source: 22 ancient royal mummies encased in glass pods will be paraded through Egypt’s capital as they head to a new home