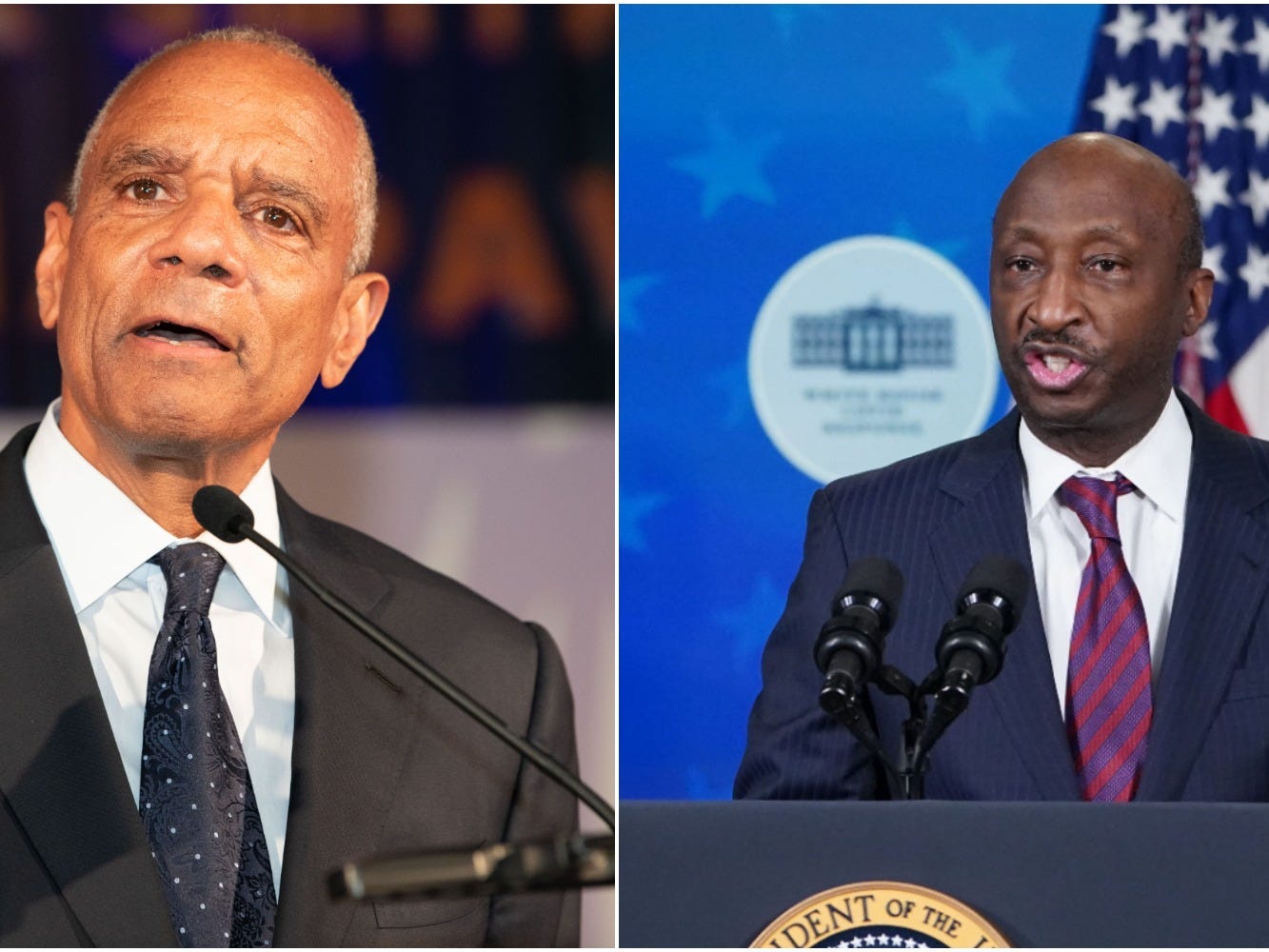 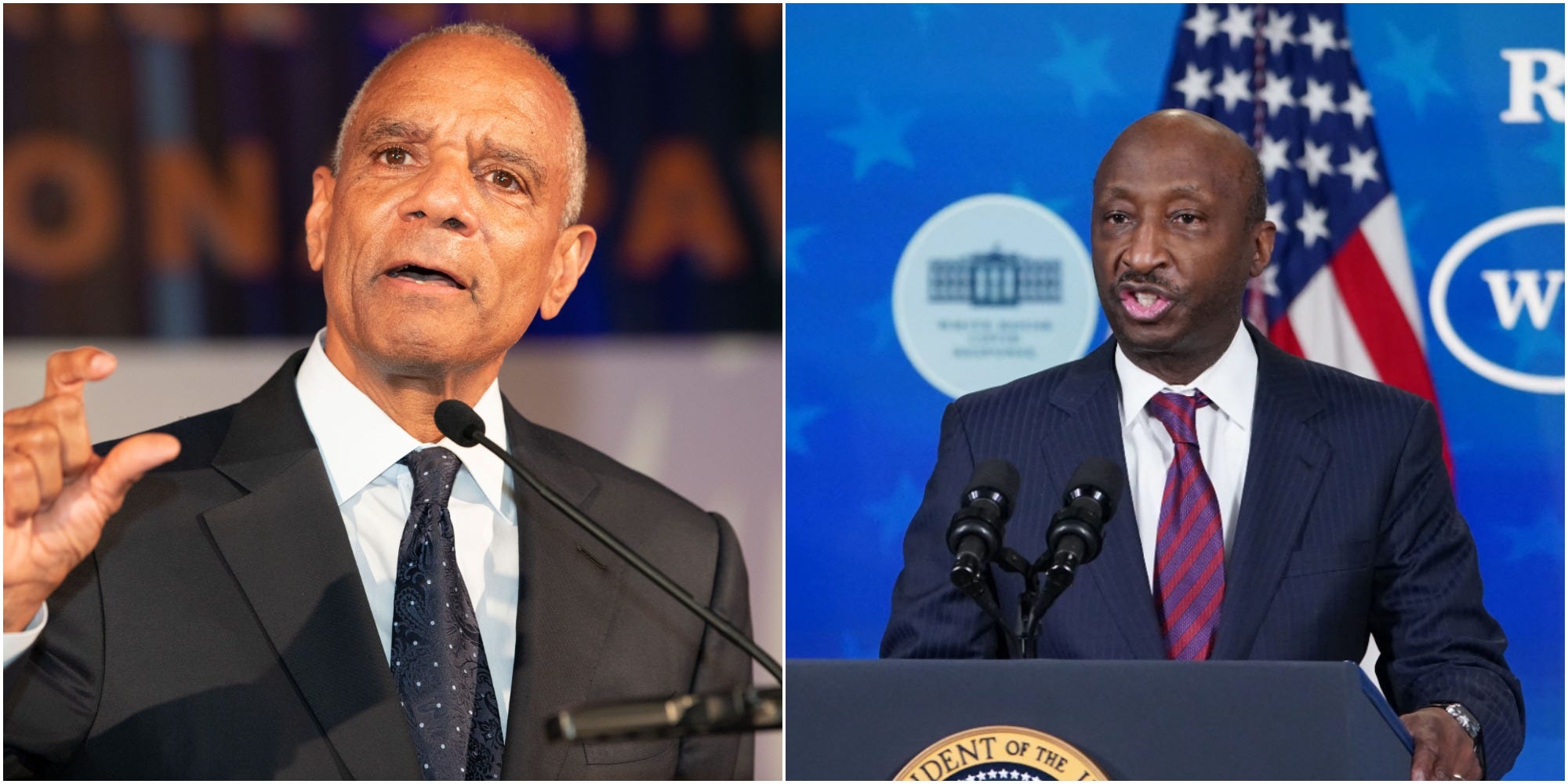 Kenneth Chenault speaks onstage in 2018 and Merck CEO, Kenneth Frazier, speaks at a briefing on the production of the Covid-19 vaccine in 2021

72 Black executives are urging US companies to speak out about new voting laws, the NYT reports.
They claim the new bill, being advanced by Republicans, could restrict the rights of Black voters.
Former American Express CEO, Kenneth Chenault and Merck CEO Kenneth Frazier are in charge of the letter.
See more stories on Insider's business page.

Top Black business leaders in the US are calling on companies to fight against restrictive voting rights laws being put in place in at least 43 states, according to a report from The New York Times on Wednesday.

So far, 72 Black executives have signed a letter to American firms, urging them to publicly oppose new laws by Republicans that they said would restrict the rights of Black voters. It comes after Georgia signed a bill on March 25 that the business leaders allege is discriminatory against Black voters.

Former American Express CEO, Kenneth Chenault, who is now a director at Berkshire Hathaway, and Merck CEO Kenneth Frazier are spearheading the letter about the new voting bill, known as SB 202, or the Election Integrity Act of 2021.

“As Black business leaders, we cannot sit silently in the face of this gathering threat to our nation's democratic values and allow the fundamental right of Americans, to cast their votes for whomever they choose, to be trampled upon yet again,” the letter said, per a CNN report.

“We call upon our colleagues in Corporate America to join us in taking a non-partisan stand for equality and democracy. Each of us stands ready to work with you on what can and must be done,” it said.

Read more: I asked MyPillow whether it sells customer data to political committees. Mike Lindell called back – and things got interesting.

The letter doesn't specifically mention companies' names. But critics of the bill have called on major firms in Georgia, such as Coca-Cola and Delta Airlines, to speak out after Gov. Brian Kemp signed it. Delta CEO Ed Bastian said Wednesday in a public memo that “the final bill is unacceptable and does not match Delta's values.”

Democratic officials and civil rights groups have criticized the new law, saying it suppresses voters, particularly those who are Black. President Joe Biden called it a “blatant attack on the Constitution” and likened it to “Jim Crow in the 21st century.”

In an interview with CNN on Wednesday, Chenault said: “What we're calling on corporations to do is not just say they believe strongly in the right to vote. It's to publicly and directly oppose any discriminatory legislation and all measures designed to limit any individuals ability to vote.”

The election bill also says volunteers shouldn't hand out water and snacks to voters waiting in line and there should be no “ballot selfies” taken. Another controversial measure is adopting stricter voter ID laws for absentee ballots.

Apple CEO Tim Cook is the most recent executive to condemn Georgia's new election law. On Thursday, Cook said: “It ought to be easier than ever for every eligible citizen to exercise their right to vote.”

We’ve love Goldbelly for sending food and treats to loved ones, and right now you can get Easter and Passover favorites delivered

Officials found an unaccompanied 4-year-old boy walking toward the US border, as Biden faces a surge in migrant children trying to enter