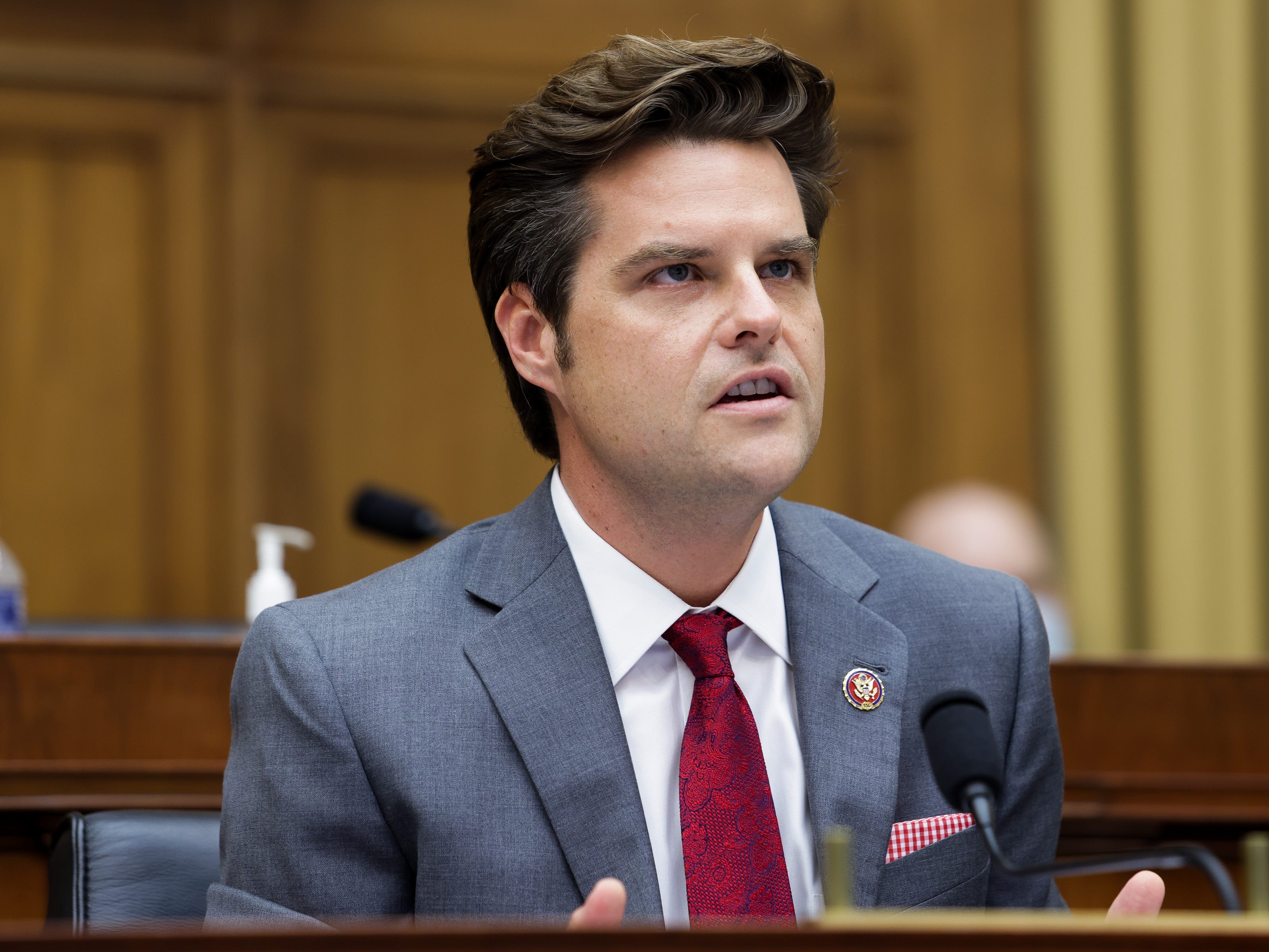 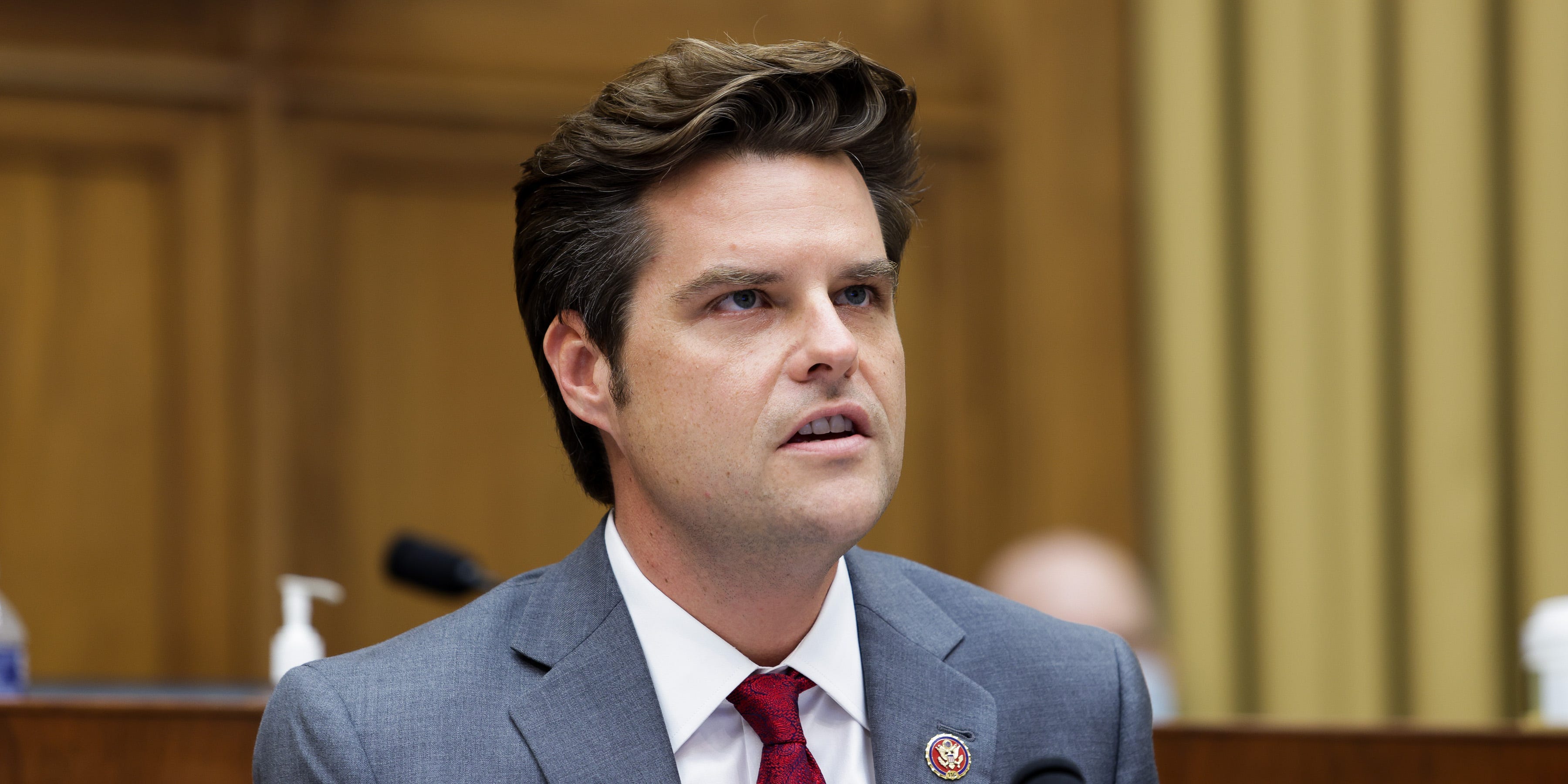 The DOJ is reportedly investigating whether Gaetz had a sexual relationship with a 17-year-old girl.
Investigators are also looking into whether he violated sex-trafficking laws, The New York Times reported.
In 2017, Gaetz was the only member of Congress to vote against an anti-human trafficking bill.
See more stories on Insider's business page.

A controversial past vote by Rep. Matt Gaetz of Florida has taken on new significance following reports that the Republican lawmaker is under federal investigation over whether he violated sex trafficking laws.

The Justice Department is investigating whether Gaetz, 38, had a sexual relationship with a 17-year-old girl and violated federal laws against sex trafficking in the process, The New York Times reported Tuesday.

This isn't the first time Gaetz has taken heat over trafficking.

In 2017, Gaetz was the lone member of Congress to vote against an anti-human trafficking bill that gave the federal government more money to fight the illegal trade across the country.

The Combating Human Trafficking in Commercial Vehicles Act designated a trafficking prevention coordinator at the Department of Transportation and created a committee to develop best practices for states and transportation stakeholders to combat human trafficking.

The Senate unanimously passed the bipartisan bill in 2017, after which it went to the House of Representatives, where it passed – though not unanimously – 418 to 1. Former President Donald Trump signed the bill into law in January 2018.

Gaetz was the only representative to vote against the bill.

Florida's two senators at the time, Bill Nelson and Marco Rubio, were both co-sponsors of the Senate version of the bill.

Following the vote, Gaetz defended his solo stance in a Facebook Live video broadcast. The lawmaker said he voted against the bill because it represented “mission creep” in creating the committee at the federal level.

“Unless there is an overwhelming, compelling reason that our existing agencies in the federal government can't handle that problem, I vote no because voters in Northwest Florida did not send me to Washington to go and create more federal government,” Gaetz said.

The representative also pointed to his former role as chairman of the Criminal Justice Committee in the Florida Legislature where he made it easier for prosecutors to bring charges against traffickers in the state.

Now Gaetz faces an investigation by the Department of Justice over whether or not he violated sex-trafficking laws during his alleged sexual relationship with a 17-year-old girl.

“The allegations against me are as searing as they are false. I believe that there are people at the Department of Justice who are trying to criminalize my sexual conduct, you know, when I was a single guy,” Gaetz said to Axios, confirming the investigation.

The inquiry is part of a larger investigation into Gaetz ally Joel Greenberg, a Florida tax collector who was charged last year with 14 felony counts related to allegations that he stalked a political opponent, used a state database to create fake IDs, and sex trafficked a minor between the ages of 14 and 17.

Gaetz has been quick to deny the allegations against him and claims the investigation is part of “an organized criminal extortion” scheme against him. In a series of tweets responding to news of the investigation, Gaetz said the probe is based on “lies” being pushed against him by a former Justice Department official.

“Over the past several weeks my family and I have been victims of an organized criminal extortion involving a former DOJ official seeking $25 million while threatening to smear my name. We have been cooperating with federal authorities in this matter and my father has even been wearing a wire at the FBI's direction to catch these criminals. The planted leak to the New York Times tonight was intended to thwart that investigation. No part of the allegations against me are true, and the people pushing these lies are targets of the ongoing extortion investigation. I demand the DOJ immediately release the tapes, made at their direction, which implicate their former colleague in crimes against me based on false allegations.”

Source: Matt Gaetz is under investigation on suspicion of violating federal sex-trafficking laws. In 2017, he cast the only vote against a human trafficking bill.