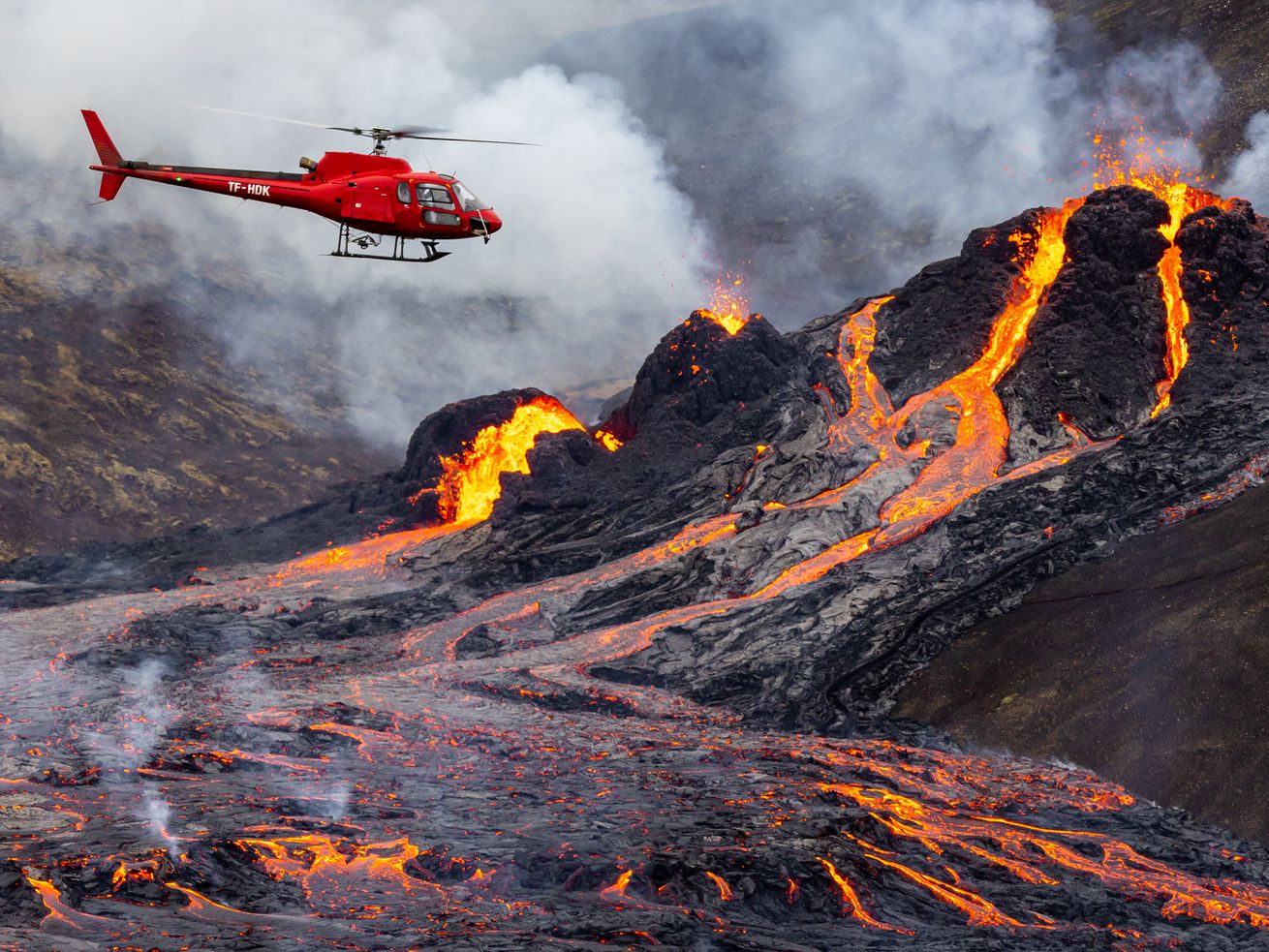 The eruption near Reykjavik followed months of earthquakes, and led to beautiful orange and red skies.

After months of earthquakes, a long-dormant volcano in the southwest of Iceland erupted on Friday night, leading to dramatic videos and splendid red skies near the country’s capital city.

According to the Icelandic Meteorological Office, the eruption near Mount Fagradalsfjall, about 20 miles southwest of Reykjavik, took place at 8:45 pm. Though considered small, the eruption created a fissure about 1,640 feet long, and spewed more than 10 million square feet of lava, sometimes in fountains reaching heights of more than 300 feet.

A new video of the eruption at Geldingardalur valley in Reykjanes peninsula. Taken from the Coast Guard helicopter. #Reykjanes #Eruption #Fagradalsfjall pic.twitter.com/B862heMzQL

It was the first volcanic eruption in this part of Iceland — the Reykjanes Peninsula, home to Reykjavik, where most of the country’s residents live — in 781 years. And it was the first time this particular volcano had gone off in about 6,000 years.

The eruption, in the Geldinga Valley, was remote enough that evacuations were not necessary, and no structures were endangered.

“As of now it is not considered a threat to surrounding towns,” said Iceland’s prime minister, Katrín Jakobsdóttir, on Twitter on Friday night. “We ask people to keep away from the immediate area and stay safe.”

A volcanic eruption has begun in Fagradalsfjall on the Reykjanes peninsula. We are monitoring the situation closely and as of now it is not considered a threat to surrounding towns. We ask people to keep away from the immediate area and stay safe. https://t.co/iIACfCc31E

Experts warned residents to beware emissions of dangerous gases, including carbon dioxide and sulfur dioxide, and there were some resulting traffic jams. Drones were temporarily prohibited from flying over the area, to allow scientists first access, but flights in and out of the international Keflavik Airport have not been affected.

The head of emergency management in the country told people to close their windows and stay inside to avoid volcanic gas pollution, which could spread as far as Thorlákshöfn, a city about 30 miles south of Reykjavik.

But on Saturday, the meteorological office said, “Currently, gas pollution is not expected to cause much discomfort for people except close up to the source of the eruption.”

The eruption is ongoing, and could last for “a day or a month,” Magnús Tumi Gudmundsson, a geophysicist at the University of Iceland, told RÚV, the Icelandic National Broadcasting Service.

The small eruption poses no immediate danger and could last for a day or a month, according to Professor Magnús Tumi Guðmundsson #Reykjanes #volcano #eruption https://t.co/V8VDH07DTT pic.twitter.com/5Xc6wbPDJo

That makes this latest Icelandic geologic event starkly different than than the large-scale earthquake at the Eyjafjallajokull volcano in 2010, which caused more than 100,000 flights across Europe to be canceled for weeks afterwards as ash spread across northern Europe and Great Britain. That was described as the largest shutdown of airspace since WWII.

“The more we see, the smaller this eruption gets,” Páll Einarsson, a geophysicist at the University of Iceland, told the Associated Press on Saturday.

Despite the relatively small size, the eruption provided residents with unique views — and people across the region shared photos of the skies, as scientists set up a livestream of the flowing lava.

This is Fagradalsfjall. It’s about 15 miles south of Reykjavik and just erupted. You can start practicing your pronunciation:Foie-gras-thals-fiat-illHave fun#iceland #volcano pic.twitter.com/IYFHQMzWsx

Iceland’s location makes it particularly susceptible to earthquakes — and eruptions

Iceland is no stranger to volcanic activity. There is usually an eruption every four or five years because the island is in a region that is particularly susceptible to seismic activity. The most recent one, in 2014, was at Holuhraun, a lava field in the Icelandic Highlands.

Earthquakes are a familiar experience, too; since 2014, the country registered between 1,000 and 3,000 earthquakes per year. But since December 2019, that number has dramatically increased, according to the New York Times; scientists are still working to understand why.

In the last week alone, Iceland experienced more than 18,000 earthquakes, with more than 3,000 on Sunday. At least 400 had taken place in the area of the volcano the day before the eruption — and that was a relatively calm day, according to state meteorologists.

“This is somewhat less seismic activity in comparison to previous mornings where the numbers have been around 1,000 earthquakes,” the meteorological office said.

Many of those earthquakes were undetectable to ordinary people, but some were of magnitude 3 and greater, so that they could be felt. The largest was a 5.7-magnitude quake on the morning of February 24, followed by a magnitude 5 tremor 30 minutes later.

“I have experienced earthquakes before, but never so many in a row,” Reykjavik resident Audur Alfa Ólafsdóttir told CNN earlier this month. “It is very unusual to feel the Earth shake 24 hours a day for a whole week. It makes you feel very small and powerless against nature.”

According to Thorvaldur Thórdarson, a professor of volcanology at the University of Iceland, the cause of this dramatic increase in seismic activity is still being studied.

“We are battling with the ‘why’ at the moment. Why is this happening?” he told CNN. “It is very likely that we have an intrusion of magma into the [Earth’s] crust there. It has definitely moved closer to the surface, but we are trying to figure out if it’s moving even closer to it.”

Icelanders were warned about possible volcanic activity as a result of the earthquakes beginning on March 3. Officials at the time did not expect the event to be life-threatening or affect property.

Iceland’s location along a series of tectonic plates — known as the Mid-Atlantic Ridge — has made it uniquely susceptible to activity.

As the Times’s Elian Peltier writes, “The country straddles two tectonic plates, which are themselves divided by an undersea mountain chain that oozes molten hot rock, or magma. Quakes occur when the magma pushes through the plates.”

Photo I took tonight over the volcanic eruption at Reykjanes Iceland. We are monitoring the situation closely and as of now it is not considered a threat to surrounding towns. #Iceland pic.twitter.com/6lTOG4xwjt

And many Icelanders shared images on social media of the eruption’s aftermath, which cast an orange hue into the sky. At night, from certain angles, its glow merged with the famed green and blue of the northern lights.

Pop star Björk — perhaps Iceland’s most famous resident — was one of those expressing excitement about the historic event and ensuing beauty.

“YESSS !! , eruption !!” she wrote on Instagram on Friday. “We in iceland are sooo excited !!! we still got it !!! sense of relief when nature expresses herself !!!”